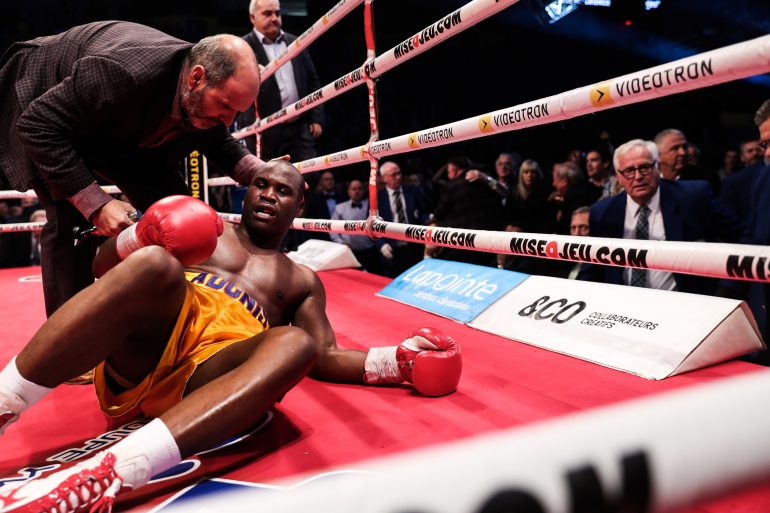 Adonis Stevenson is in critical condition in the intensive care unit of a hospital, the fighter’s promoter, Yvon Michel, announced via Twitter early Sunday morning.

Stevenson (29-2-1, 24 knockouts) was transported to the hospital following an 11th-round knockout defeat to Oleksandr Gvozdyk on Saturday in Quebec City, the 10th defense of his WBC/lineal light heavyweight championship. The bout was televised by Showtime as a lead-in to the heavyweight championship fight between Deontay Wilder and Tyson Fury.

According to sources, Stevenson was disoriented in the ring following the bout. He collapsed in his locker room and was immediately transported to a medical facility.

WBC president Mauricio Sulaiman told The Ring he had no further information on Stevenson’s status at this time. Michel didn’t immediately respond to a message seeking comment.

The 41-year-old native of Haiti is rated No. 3 by The Ring at 175 pounds. It was a closely contested bout during the first half of the matchup, but the Ukrainian took over during the second half. He was battering Stevenson in the 11th, and ended matters with a volley of punches in the corner, the last of which left the Quebec resident slumped over the bottom rope.

Stevenson has long been regarded as one of boxing’s most dangerous punchers. He was also the second-longest reigning champion in the sport before the defeat to Gvozdyk, a Top Rank fighter. Stevenson battled Badou Jack to a draw in May in a fight of the year candidate.

The Ring’s thoughts are with Stevenson and his family at this time.