Mark Breland: ‘Tyson Fury’s whole thing will be to go the distance. He will stink it up’

Two-time welterweight champion Mark Breland is very soft spoken, sometimes I even have to lean in to hear him when he shares his wisdom on the sweet science.

On Wednesday, I was rewarded when I leaned in – this time on the phone – when I spoke to the Brooklyn-based tutor, who will be in the Deontay Wilder (40-0) corner Saturday night at the Staples Center in LA.

Breland, one of the best American amateur boxers in history, shared some insights into how he thinks the Wilder-Tyson Fury scrap will play out, and what the Alabama boxer has to do to get the “W”.

“The Fury win is going the distance,” Breland told me. “As long as he doesn’t get kayoed, he can say, ‘Wilder didn’t get me out of there.’ His whole thing will be to go the distance.”

Breland thinks it’s possible that Fury, the unbeaten former champion from England, will do what he can to frustrate Wilder. If he can hit off a break to mess with Wilders’ head, then he will.

And what other tactics does Team Wilder expect from Fury on Saturday?

“He will stink it up,” Breland said, and I told him I agreed with that. “But around maybe the ninth and 10th, if Fury starts to tire, if he gets caught, it’s a wrap.” 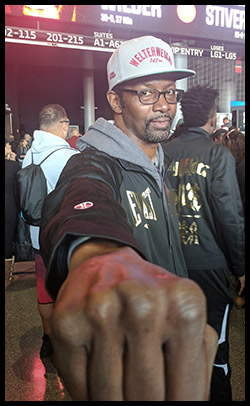 Breland knows that Fury is coming off a long layoff, and his recent opposition hasn’t been anywhere near Wilder in terms of quality, so that should be benefitting his guy.

However, if he’s seeing Wilder getting frustrated at not being able to get a bead on a rejuvenated Fury, then that could be problematic. “(Fury’s) thing is to frustrate you, walk around, do all that stupid stuff,” Breland said.

To reiterate what I think is a superb point by Breland, it could well be that Fury views surviving as a win. Thus, I think we could see Wilder adjust his MO, his strategies, accordingly.

From my POV, I think it would be wise for Wilder to touch Fury, not fixate on head-hunting. Touch that body, those shoulders, everywhere. Slow his legs, and then you get a better chance to hit that noggin. Use your awkwardness to your advantage, fire from strange angles, which will be useful against a guy who sees punches very, very well. Whack him with something he can’t see. Wilder, who is more accurate with his shots than given credit for, should take his time, not get into shark frenzy mode.

Breland said he’s liked Deontay in this camp and wants to see a relaxed operator in the ring Saturday. He will weigh maybe 216 to 220, the trainer told me, and today (Wednesday) they will just get loose, shake it out, stay sharp.

OK, bottom line, what is Breland’s prediction? Wilder by KO?

“If Wilder stops Fury, it’s in the later rounds. But Fury will do everything in his power to not get knocked out.”