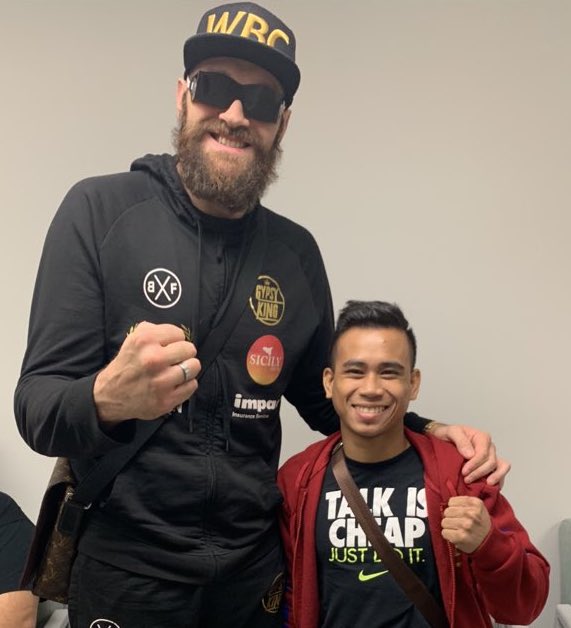 Mark Anthony Barriga gets a spotlight on the undercard of Wilder-Fury at Staples Center. Photo from Team Barriga
28
Nov
by Ryan Songalia

LOS ANGELES – Two of the lightest boxers will get a spotlight on the undercard of two of the biggest fighters in the sport.

After just two years as a professional, Mark Anthony Barriga is getting his first world title opportunity on the Deontay Wilder-Tyson Fury card this Saturday at Staples Center when he faces Carlos Licona for the vacant IBF strawweight belt. It’s a big opportunity, one that comes shortly after Barriga’s promoter, Manny Pacquiao, signed a deal to be represented by Al Haymon, who also advises Wilder.

“[I was] just expecting a normal fight because I know this is my tenth fight. [I wasn’t] thinking that [I would] fight on the big card,” said Barriga (9-0, 1 knockout), the IBF’s No. 1-ranked contender at 105 pounds from Panabo City, Philippines.

Barriga was one of his country’s top amateurs before turning pro, a 2012 Olympian who made it to the round of 16 in London before losing by a single point in his second fight. The 25-year-old has been fast-tracked through the pros by matchmaker Sean Gibbons, and in the past year has recorded wins over former title challengers Wittawas Basapean and Gabriel Mendoza. Barriga had been planning to face Hiroto Kyoguchi as the mandatory challenger before the Japanese fighter vacated to step up to 108 pounds.

Barriga has top-notch boxing skills, but the one knock on the southpaw is his lack of power. That means longer fights for Barriga, and a mandate to ensure he’s in peak condition each time he steps in the ring.

“I know that I don’t have a lot of power, but I work hard in the gym. I need to train my stamina, how to control it, because you know I’m fast. I’m always moving in the ring, so I need to control my stamina,” said Barriga, who is ranked No. 10 by The Ring.

Licona (13-0, 2 KOs) of Westminster, California, steps into this fight after strengthening his contender credentials earlier this year with a win over Janiel Rivera in Puerto Rico. The 23-year-old Mexican-American is the cousin of Marcos Licona, a fringe featherweight contender who inflicted the second loss on Israel Vazquez and fought once on HBO against Juan Manuel Marquez, who was the only fighter to stop him.

Licona is trained by Robert Garcia and managed by Mikey Garcia. Robert Garcia says he expects Barriga to be even better than he’s seen in videos, because it’s a bigger fight than his previous ones.

“There’s not much out there to see, because his fights are out in the Philippines and he hasn’t really shown a lot of what he really is. But he is very talented. I know for a world title fight he’s gonna be in the best shape of his life. So he’s gonna be ready, but so are we,” said Garcia.

The fight will not be on the Showtime pay-per-view broadcast but is expected to be shown in the Philippines.