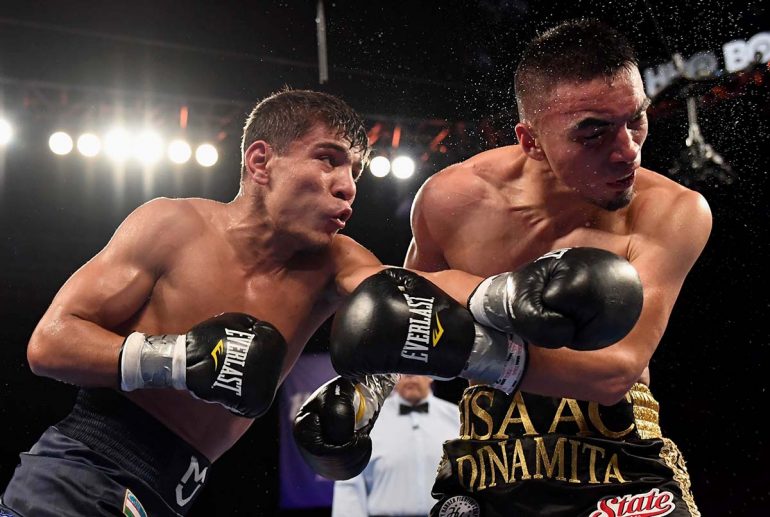 ATLANTIC CITY, N.J. — They’re not exactly straight, or short, or on that direct beeline that can short-circuit the senses. But Murodjon Akhmadaliev’s punches work. They come from odd angles, in a wind-up style that seems to start at Akhmadaliev’s ankles and find a way to a face, or a chin, or a cheekbone, or a rib.

Akhmadaliev, a southpaw 2016 Olympic bantamweight bronze medalist from Uzbekistan, scored a ninth-round stoppage over the game southpaw Zarate (16-4-3, 2 knockouts) in the scheduled 10-round junior featherweight bout.

Akhmadaliev (5-0, 4 KOs) remained undefeated and looked sharp in doing so.

In the opening round, Akhmadaliev scored with a right and had Zarate cornered for a moment before Zarate spun out and escaped. Akhmadaliev came on strong at the end of the second to do enough to win the stanza. But it was the third that Akhmadaliev made the biggest impact of the fight to that point, landing a crushing right on Zarate’s chin and forcing him to back up.

The sixth round brought more Akhmadaliev pressure. He crowded Zarate and stayed on him throughout the round, despite his left cheek starting to blow up. Possibly feeling the fight slipping away, Zarate used his jab in an attempt to break Akhmadaliev’s high guard.

Still, that didn’t deter Akhmadaliev. He kept coming forward, again chopping at Zarate’s body and looping a few rights at his head.

An Akhmadaliev right to the body backed Zarate up in the eighth. Another right bounced off Zarate’s nose. In the last minute of the eighth, Akhmadaliev banged another left off Zarate’s body and had in him trouble once more before the bell sounded to end the round.

By the ninth, Zarate couldn’t keep Akhmadaliev away. With his two cheeks swelling up, Akhmadaliev burrowed forward and landed a right hook that sunk Zarate into a corner. That’s when referee Eric Dali had seen enough and stepped forward to end it at 1:17 of the ninth.

In a very rare move, distinguished amateur Israil Madrimov made his pro debut in a scheduled 10-round junior middleweight bout against tough southpaw Vladimir Hernandez (10-3, 6 KOs), and the 23-year-old from Uzbekistan got his career off to a good start with a sixth-round stoppage.

After a patient start, Madrimov came out aggressively in the second and popped a straight right off of Hernandez’s head. Madrimov opened a cut on Hernandez’s left eyebrow and had Hernandez in some trouble by the end of the round.

Madrimov’s success in the second round stirred more confidence in the third. A lead right bounced off of Hernandez’s head and another series of rights dropped him. Referee Harvey Dock was taking a good look as Madrimov kept hammering away. Still, Hernandez moved stubbornly forward and somehow managed to survive the round, though there could have been an argument for Dock to stop it.

A steady diet of Madrimov rights, mixed with an occasional left hook and a right uppercut had Hernandez backing up, unable to do anything to keep Madrimov off of him.

Dock and the ringside doctor took a good look at Hernandez between the fourth and fifth rounds.

There were a few occasions when Madrimov switched from orthodox to southpaw, then back again, but he wasn’t very active in the fifth and Hernandez got through another round.

That changed in the sixth. Madrimov attacked with a mix of punches and Dock mercifully waved it over at 1:24 of the round. Madrimov (1-0, 1 KO) reacted with a somersault and a backflip.

On the undercard, 2016 Russian Olympic heavyweight gold medalist Evgeny Tishchenko (3-0, 2 KOs) made easy work of Christian Mariscal (11-2, 5 KOs) in a scheduled six-rounder, winning with a KO 2 at 1:38. At 6-foot-5, Tishchenko towered over the 5-10 Mariscal. It was hardly a contest.

Local Philadelphia fighter Karl Dargan (19-1, 9 KOs) went the whole eight rounds against Moises Delgadillo (17-18-2, 9 KOs) in winning a lightweight decision by unanimous 78-73 scores. It was Dargan’s second fight back since his loss to Tony Luis in 2015.