Deontay Wilder-Tyson Fury testing to be conducted by VADA 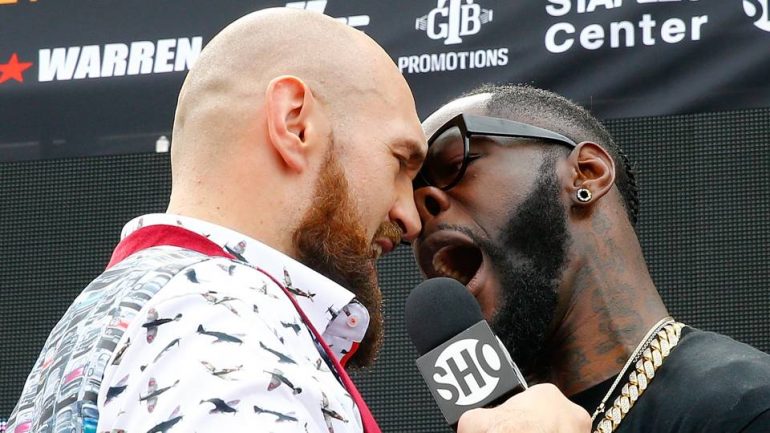 Testing protocol for the anticipated heavyweight showdown between WBC titleholder Deontay Wilder and lineal champion Tyson Fury has been shrouded in the kind of rumors, misdirection and uncertainty that follow most big fights in the social media age.

However, the unbeaten heavyweights will be undergoing anti-doping testing conducted by VADA for the lead up to their Showtime PPV showdown on December 1 at Staples Center in Los Angles. In early October, Tyson Fury enrolled in the WBC Clean Boxing Program but according to a source close to the fight, details regarding third party testing for their respective training camps had not been ironed out. But according to the executive director of the California State Athletic Commission (CSAC), VADA will be handling testing duties.

“So, here’s the deal: Deontay Wilder and Tyson Fury are not only enrolled in the Clean Boxing Program,” Andy Foster told The Ring, “but Tom Brown of TGB Promotions has paid VADA significant, significant money additionally to do the testing for this fight. In addition to what the WBC is doing for this fight. So, this is a lot of testing. And I think it is a credit to the PBC that they would go to this length to ensure that this is a clean match-up.”

Foster added, “But you are hearing it from me not from them. This is not something that they want to advertise. They aren’t out there talking about this but CSAC and I worked it out and this is what’s happening.”

When asked if this means that the CSAC endorses VADA and will honor its test results, Foster said “That’s correct. Yes. And the results are actually coming directly to us.”

Foster affirmed that the CSAC will handle the adjudication process in the event of a positive result from either man. While Wilder has had three opponents test positive during training camps resulting in fights getting cancelled, Fury has tested positive for banned substances three times, twice for cocaine and once for nandrolone.

The Nevada Athletic Commission has begun to utilize VADA more and more in recent years as an addendum to their testing program. Is this a sign the CSAC will be using VADA in a similar fashion?

“It is, affirmed Foster. “We have USADA that way, as well, but over here they do more on the MMA side. For a lot of reasons, we and the PBC have chosen to go with VADA.”

Gabriel Montoya is a San Francisco-based writer/podcaster who has been covering boxing for over ten years. He can reached on twitter @Gabriel_Montoya or heard on the Leave it in the Ring podcast on itunes or whereever you listen to your favorite pods.