Gervonta Davis: Abner Mares is my toughest opponent; no problem fighting in his backyard 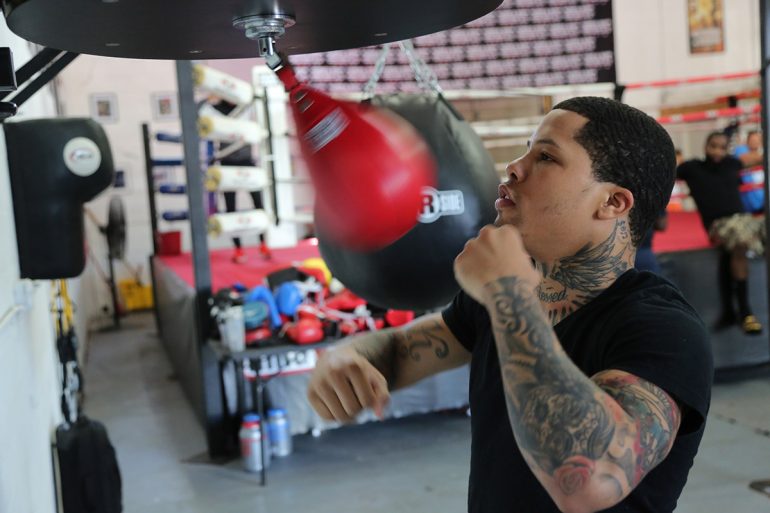 BEVERLY HILLS, Calif. — Gervonta Davis has competed in less than three full rounds since August 2017, but he says that’s about to change dramatically.

Tank told The Ring on Tuesday during the news conference for his friend Adrien Broner’s upcoming fight against Manny Pacquiao that he expects to fight three times in 2019.

The first of those potential three bouts will come against Abner Mares, as The Ring previously reported. According to sources, that bout will headline a Showtime Championship Boxing card in either February or March. Davis told The Ring the 130-pound title tilt will take place in the Los Angeles area, where Mares hails from.

“It’s basically like when Floyd (Mayweather) fought (Arturo) Gatti … we’ll take it in his backyard,” Davis said, referring to his promoter’s 2005 fight in Atlantic City, New Jersey, where Gatti played to raucous crowds.

“I’m just excited to get back in the ring and do what I love to do and that’s fight. I’m ready to put on a great performance for the fans and become a legend in the sport.”

If Davis (20-0, 19 knockouts) hopes to truly achieve those lofty aspirations, he’ll certainly have to fight far more often. Weight issues and problems with the law helped limit him to just one fight in 2018, a third-round TKO of Jesus Cuellar in April.

The power-puncher from Baltimore was steadfast: he’ll fight three times next year and “the last one could be big.”

“We’re very confident he’ll fight three times in 2019,” Mayweather Promotions CEO Leonard Ellerbe told The Ring. “He fought that many times in 2017. We’re on the same page now like we’ve always been. 2018 came and gone. We’re looking forward to ’19; get this thing kicked off the right way and watch him go to work.”

There aren’t any opponents currently competing at 130 pounds who could pair with Tank for a marquee bout, but there are several notable PBC boxers at 126 pounds.

If Leo Santa Cruz or Gary Russell Jr. follows in Mares’ footsteps and moves up to 130 pounds, those are attractive options for an end-of-year title fight. If it doesn’t happen in 2019, those potential matchups might not happen at all. “I can make 130 three more years, but after next year, I think I’ll go to ’35,” Davis said.

Davis is still just 24 years old. Matched up against a fighter like Mares who owns a deep well of experience, Tank is confident he’ll be far better off moving forward.

“(Jose) Pedraza was a great fighter, he was a tough fighter, but on that top-10 level, I think Abner is my toughest opponent,” Davis said. He knocked out Pedraza in January 2017. “He’s got a lot of experience and he’s been under (the bright lights). And I’m fighting in his hometown.”