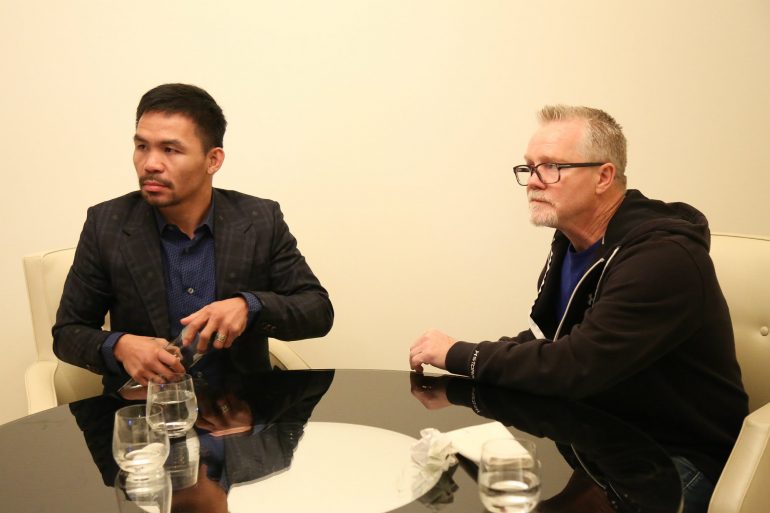 After meeting face-to-face with his most famous protege’ on Tuesday, Freddie Roach has accepted Manny Pacquiao’s offer to return to his camp.

“Manny reached out directly. We sat together one on one. I’ll be in his corner January 19,” said Roach in a statement provided through spokesperson Marie Spivey.

The meeting took place at Pacquiao’s suite at the Waldorf Astoria Beverly Hills, which is just five miles from Roach’s Wild Card Gym in Hollywood, where the Philippine senator Pacquiao (60-7-2, 39 knockouts) will complete his training for his fight against Adrien Broner once he moves camp from the Philippines to the U.S. on December 22.

Roach, who had trained Pacquiao from his first fight on American soil in 2001 until his unexpected loss to Jeff Horn last year, was not in Pacquiao’s corner for his most recent fight in July, a seventh round technical knockout of Lucas Matthysse in Malaysia.

In Roach’s place was Buboy Fernandez, Pacquiao’s long-time assistant and best friend, who was elevated to head trainer for what was Pacquiao’s first stoppage win since 2009.

Roach had previously said he had not spoken to Pacquiao since after the Horn fight and would not give word about whether he would accept Pacquiao’s offer until they had spoken directly. Pacquiao’s then-promoter Bob Arum told Los Angeles Times that Pacquiao had been upset that Roach hadn’t made an issue of Horn’s roughhouse tactics until after the fight, and felt Roach wasn’t on top of his game.

Pacquiao said Monday that Fernandez will still be head trainer and handle the more physical aspects of the job, with Roach, 58, to “supervise” the camp, offering advice for Fernandez to relay in the corner.

“Freddie is not young anymore, I feel pity for Freddie, praying for the healing of his sickness,” Pacquiao said, referring to Roach’s battle with Parkinson’s disease. “My thinking is, he can use Buboy to do mitts in training, and just supervise and watch the training.”

Together with Roach, Pacquiao has become an eight-division champion – seven of which he won with Roach in his corner, while earning Fighter of the Decade honors for the 2010s from the Boxing Writers Association of America. Roach has also raked in laurels due in large part to his association with Pacquiao, having been named Trainer of the Year seven times by the BWAA, and was inducted into the International Boxing Hall of Fame in 2012.

In addition to Fernandez and Roach, Pacquiao’s camp includes strength and conditioning coach Justin Fortune and MP Promotions head Joe Ramos, while Fernandez says a cutman has yet to be decided on. Michael Koncz, Pacquiao’s long-time advisor, was not in New York for the kickoff press conference but was with Pacquiao for Tuesday’s event. Sean Gibbons, who handles matchmaking for MP Promotions, is expected to scout for sparring partners to approximate Broner’s style.

Pacquiao has also signed a deal with Al Haymon, whose Premier Boxing Champions outfit controls many of the top fighters in the welterweight division, including the currently-retired Floyd Mayweather Jr., whom Pacquiao has openly sought a rematch with.

The fight against Broner (33-3-1, 24 KOs) will take place at the MGM Grand, and will be Pacquiao’s first fight in America since 2016. Ramos said “things have been in place for a while” to deal with any outstanding tax debt Pacquiao has, and says that claims that issues with the Internal Revenue Service had been a hurdle to fighting in the U.S. were “overblown”.

“Obviously for him to be able to come here and announce something, even to fight, it just wasn’t true,” said Ramos.