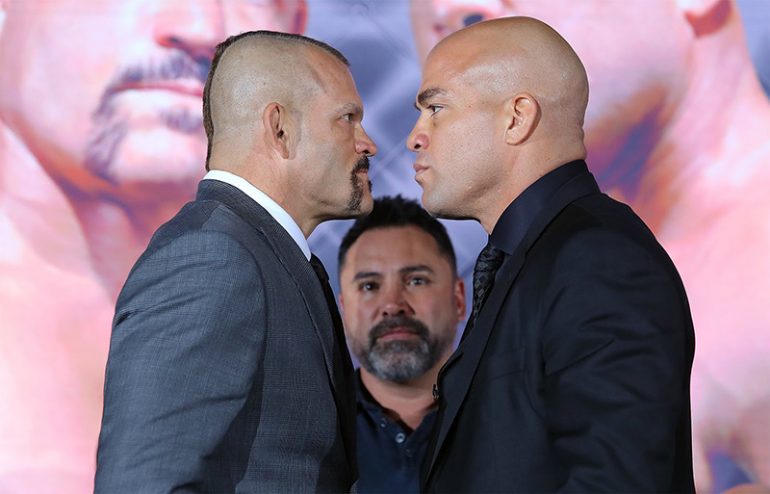 The promoter, touting Golden Boy Promotions’ MMA foray, said that Ortiz and Liddell are the two standout names in the space and noted that they’ve been around so long that even casuals know them.

“Because of the history, because of the trilogy,” that’s why he decided to hop into this pool, De La Hoya said. 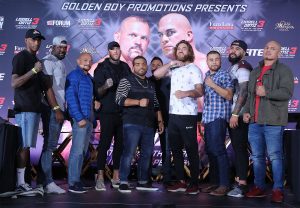 Liddell-Ortiz 3 will have a large undercard. Photo / Tom Hogan-HoganPhotos-Golden Boy

Oscar said there will be 18 fights on the card, to unfold at the Forum in Inglewood, California, and that includes five amateur title fights, so there should be enough action featuring talent of the veteran variety, as well as up-and-comers, to give buyers a good value.

Before ushering the 43-year-old Ortiz and the 49-(on Dec. 17th)-year-old Liddell to the mic, the promoter stated, “Nobody can tell you that you must retire, the fighter must say it.” He noted that the fighting spirit can’t be so easily dismissed. It’s in their blood, still, and so they do what their brain and body and spirit demand they do…fight. He also promised he’d be sticking in the MMA space, and it wouldn’t be one and done.

Ortiz said that he’s thankful for living in America, and mentioned the tragic fires and shootings last week. He said also that he suckered Chuck, and knows everything Liddell has been doing in training. He implied that his insider knowledge will help him to get the ‘W,’ but didn’t specify how he gleaned the intel. 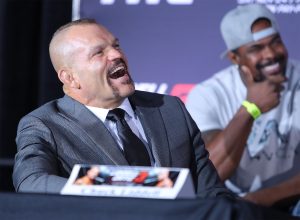 “I’m taking your ass down and pounding you out,” Ortiz responded.

“Do we have to face-’em off? Jesus,” Oscar said, crossing his fingers that there’d be no premature collision.

There wasn’t and yes, the quality of the intensity of the staredown had me more than a bit pumped to see how their third clash would play out.

Liddell vs. Ortiz 3 is a three-round light heavyweight fight presented by Golden Boy Promotions. The event is sponsored by Fred Loya Insurance, FITE.TV and Casa Mexico Tequila. The fights will take place on Saturday, Nov. 24, 2018 at the ‘Fabulous’ Forum in Inglewood, Calif. The fight will be presented live on Pay-Per-View beginning at 6:00 p.m. PT/9:00 p.m. ET.