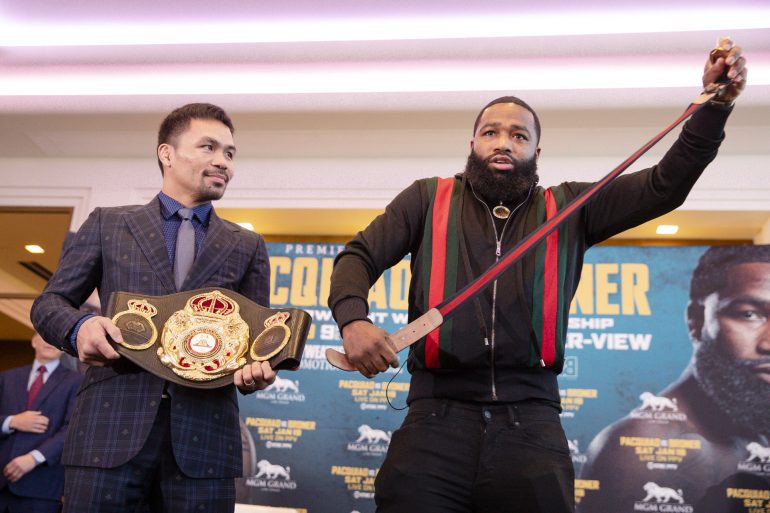 Adrien Broner’s typically crude jokes (including plenty of one-liners aimed at Pacquiao’s race) elicited nothing but giggles from the Filipino Senator.

Tuesday’s news conference at the Waldorf Astoria was Pacquiao’s first media event in Los Angeles, the place where he lived and trained during his years tearing through the sport like a tornado, and it was clear the familiar surroundings brought him happiness.

He’s ecstatic to once again be fighting in the United States, and not just any bout, but a mouth-watering matchup with Broner, who despite his struggles is a dependable action fighter with a recognizable name.

Pacquiao’s welterweight fight against Broner on January 19 in Las Vegas is his first bout stateside since a November 2016 matchup with Jessie Vargas. One big reason he hasn’t fought or trained in the U.S. during that period: Pacquiao has dealt with a lingering tax bill that neared $30 million, according to multiple sources.

Issues with the IRS apparently being squared away, Pacquiao looked reinvigorated Tuesday during the second leg of the media tour (they were in New York the previous day). After all, the future hall of famer scored his first knockout in almost a decade with a seventh-round stoppage of Lucas Matthysse in July, proof he still has plenty left in the tank, even at age 39.

“I’m not a talker but I do it in the ring,” Pacquiao said, “just to prove it to them I’m still there. …  I want a fabulous performance in the ring on January 19. Of course, I’ll try my best to do it convincingly. That will get the trust of the fans back.”

The future hall of famer is alluding to his May 2015 mega fight with Floyd Mayweather that shattered pay-per-view revenue records but fell far short of meeting expectations in the ring. Simply put, it was a boring fight. Bet on a far more exciting scrap with Mayweather’s former protege.

Pacquiao is gunning for a second consecutive knockout and said with a smile: “I have an idea (how to stop Broner) but I will not say because it’s secret. … I never underestimate him. I think this is a hard fight for me. Broner is a good boxer also. Fast. Quick. He has strength.”

This bout with Broner isn’t just another fight; it’s far and away Pacquiao’s most high-profile matchup since he met Mayweather.

Pacquiao’s remains one of the biggest attractions in the sport, even in the twilight of his career, and a pairing with a charismatic personality like Broner could lead Showtime to PPV success.

For all of his popularity — notoriety, even — Broner’s resume is still missing a signature victory. Sure, he owns all the talent in the world and has claimed titles in four weight classes, but every time he’s stepped up, he’s been defeated clearly. Losses to Marcos Maidana, Mikey Garcia and Shawn Porter proved Broner couldn’t hang on the elite level.

Now he’s faced with the most daunting assignment of his career on his biggest stage yet. One win — one upset — and Broner can write his own story moving forward.

Win or lose, we can be confident Broner will promote the hell out of this fight. He was a willing participant Tuesday in performing the heavy lifting as the B-side.

“I gotta be the one to sell the fight,” Broner acknowledged. “His English isn’t that [good]. All he do is smile and say one word at a time. So I gotta sell the fight.”

Pacquiao is the draw — the intrigue remains after all these years. Broner still holds promise, and now, he has one opportunity to fulfill it all.

If Broner can finally deliver, Pacquiao won’t be laughing any longer.