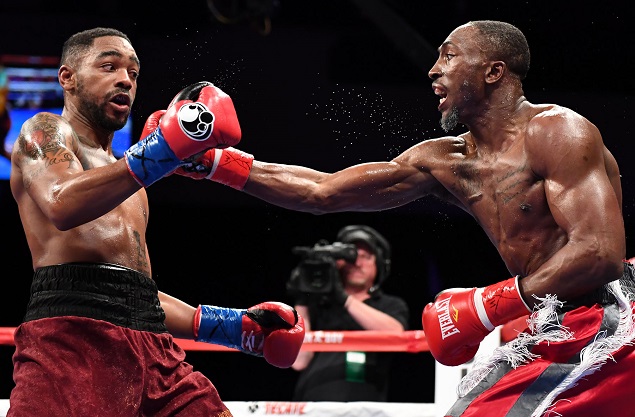 The love affair started early for Travell Mazion (14-0, 12 knockouts), an Austin, Texas native, who campaigns in the junior middleweight division.

At age 6, his brother took him to a boxing gym. “He introduced me to the sport by walking me into a local boxing gym. I fell in love with the sport and never turned my back on it,” Mazion told RingTV.com.

We chatted and tried to get a sense of where his head is and determine if I should put him on my watch list of prospects whom have a better-than-average chance of panning out. He opened our eyes to one thing for sure – his ambition reservoir seems boundless, we decided, after hearing him say he’d like a showdown with heavy-handed Mexican and WBO beltholder Jaime Munguia. First some basics…

“My trainer now is Ozell Nelson and my manager is Cleveland “Fly As Day” Jones…I have an awesome relationship with both of them. It’s a family bond between us, with the business and talent structure to execute,” Mazion said. “We are very detailed and dedicated to one another. We train hard but, most importantly, smart. Once the opportunity is presented to showcase my talent, we execute and deliver. Between myself, Jones and Nelson, we’re all on the same page at all times. I have experienced success with these guys; now it’s time to become successful, which is one thing I know we’re gonna be.”

Mazion went 2-0 in 2018, besting Daquan Pauldo, then 17-1, in June, and downing 15-2 Alan Zavala on September 29, on a card topped by former three-division titlist Jorge Linares in Indio, California.

“My last two fights went as planned,” he continued. “My coach and I talked about what was needed of me in order to win. I went in there executed and did exactly what he told me to do.”

“I don’t look for anything; just whoever is next for me to fight, it’s going down! Simple as that. My intentions is giving them an ole-fashioned major boxing lesson of today’s time. Now Jaime Munguia (in 2015) fought Alan Zavala, who I fought my last fight and went the distance with him. I’ve been watching Munguia. I know I can beat him! I have all the tools to defeat him.”

Mazion, age 23, has learned what most if not all pros do, that the outside-the-ring goings-on can be difficult and draining.

“I’d rather have four solid quarters than a hundred pennies any day. Yes, I’ve made much-needed adjustments and released individuals from my team last year. People out there is grimy and dirty. Individuals would do whatever they can to stop you from achieving your dreams but I’m too strong, focused and determined to be the best in and outside the ring. I have a solid core group now and even the sky is limitless.”

Who does he look to as inspiration and to pattern himself after then? “I look up to Tommy Hearns and Mike Tyson. Those are my idols as well as Sugar Ray Robinson.”

Video shows us that Mazion has a good collection of fast-twitch muscles; he stays calm under fire, uses his length well, has fast hands, which you see in his sharp counters, knows to set the table with the jab, is coordinated and nimble afoot and sometimes gets tagged coming in because he has excess confidence in his reflexes. If he so chooses, he could become more of an offensive force, could dictate terms more often than he does and could watch his fanbase grow faster if he commits to being more of punisher. I came away after watching video deciding that, yes, this kid has potential and I’m curious to see if his results can match his ambitions.