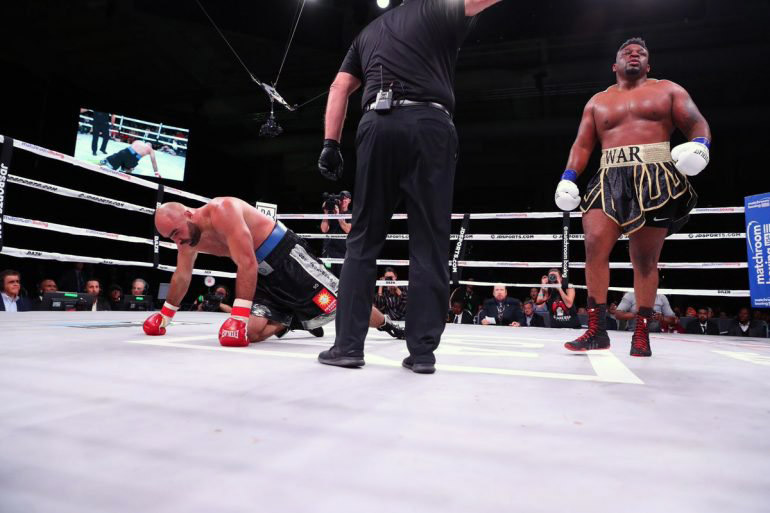 Bogdan Dinu got off to a good start, but it was just a matter of time until Jarrell Miller caught up to him. Photo by Ed Mullholland/Matchroom Boxing USA
17
Nov
by Ryan Songalia

Jarrell Miller had a slow time getting out of the gate, but eventually caught up to Bogdan Dinu to score a fourth-round knockout win Saturday night.

Dinu, an unbeaten but untested Romanian, got off to a quick start against Miller, boxing behind his jab and circling to the middle of the ring to bank away points. All of that was erased in the fourth when Miller (23-0-1, 20 knockouts), who is nearly two pounds lighter than his fight last month against Tomasz Adamek at 315 1/4 pounds, caught up to the 237 1/4-pound Dinu.

A right hand to the body opened up a right uppercut-left hook combination reminiscent of Mike Tyson, dropping Dinu (18-1, 14 KOs) for the first time in his career. Dinu rose up at the count of nine but went right back down from an overhand right, rising only once the count had completed.

“I knew once I started applying the pressure and get my footing down, I’ll get him,” said Miller, 30, of Brooklyn, N.Y., who said he’d had a cold since he arrived in Kansas for the fight. The win was Miller’s third of 2018 and second straight on the DAZN platform, which is operated by Eddie Hearn’s Matchroom Boxing. Miller, rated No. 9 by The Ring at heavyweight, named just about everyone under the championship level as potential opponents, recognizing that there’s a lot of business being sorted out at the top.

“We want AJ (Anthony Joshua) but AJ is a little busy. If Dillian Whyte gets past Dereck Chisora (on December 22), I’d like one of them,” said Miller, whose subsequent mention of Trevor Bryan (20-0, 14 KOs) of Schenectady, N.Y., is likely the first time many have heard of him.

Asked by ringside interviewer Chris Mannix what appealed to him about a fight with Whyte, Miller said it’s largely because much of the division’s top fighters are based out of the United Kingdom.

“I think it’s about time I knock out a Brit. The Brits are the top of the list just as me and Deontay (Wilder) is; we’re the two undefeated guys on the American side. Deontay is fighting a Brit; he’s been calling out AJ, but Tyson (Fury) stepped up. If I can’t get AJ, I’d like the next guy — Dillian Whyte, Dereck Chisora, even a David Allen or David Price.”