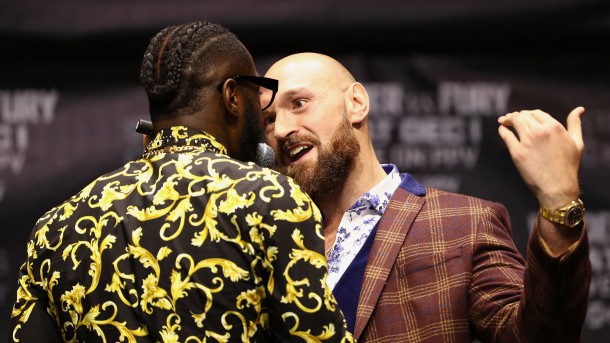 Tyson Fury won the war of words against that "bum dosser" Deontay Wilder, but what happens when they step into the ring on December 1?
16
Nov
by Mike Coppinger

In an effort to gear up for the biggest fight of his career, Tyson Fury is bulking up the team around him.

The lineal heavyweight champion recently added Freddie Roach to his corner ahead of his December 1 showdown with WBC titleholder Deontay Wilder (Showtime PPV, $74.95). The Gypsy King’s head trainer remains Ben Davison; Roach will serve as Fury’s cut man on fight night and offer guidance from his treasure trove of experience from some of the most marquee bouts in boxing.

Fury (27-0, 19 knockouts) was training in Big Bear Lake, California, before he moved his camp to Roach’s Wild Card Boxing Club in Hollywood, roughly 100 miles away. The meeting with Wilder takes place at Staples Center in Los Angeles, and Fury is in the area with plenty of lead time to become acclimated.

“We always intended to train down to Los Angeles and then I asked for Freddie Roach in the corner because he’s been very hospitable to us,” Fury said on a conference call with media Wednesday. “And I thought he’d be good if we got him in the corner as well and gives us some tips and just helps out generally … It’s really good to have Freddie’s experience around, giving us good pointers. He’s also a very nice guy.”

Roach, 58, is a hall-of-famer trainer, but these days, his stable is thin on top talent. Albert Machado, a 130-pound titleholder, is Roach’s lone champion.

Long regarded as one of the most astute minds in boxing, the former fighter should act as a calming presence in Fury’s corner. Roach guided Manny Pacquiao to the pinnacle of the sport, and has also worked with Mike Tyson and James Toney during his esteemed career.

Fury shocked the world with a decision victory over Wladimir Klitschko in November 2015, and the Brit will be looking for another upset when he meets Wilder. The 30-year-old ended a two-and-a-half-year layoff this summer; Fury reeled off two consecutive wins against limited opposition in preparation for his fight with Wilder, the biggest heavyweight championship fight on American soil since Lennox Lewis knocked out Mike Tyson in 2002.

“Freddie is his own man,” Fury said. “Whatever he wants to do, he’ll do in the corner.”