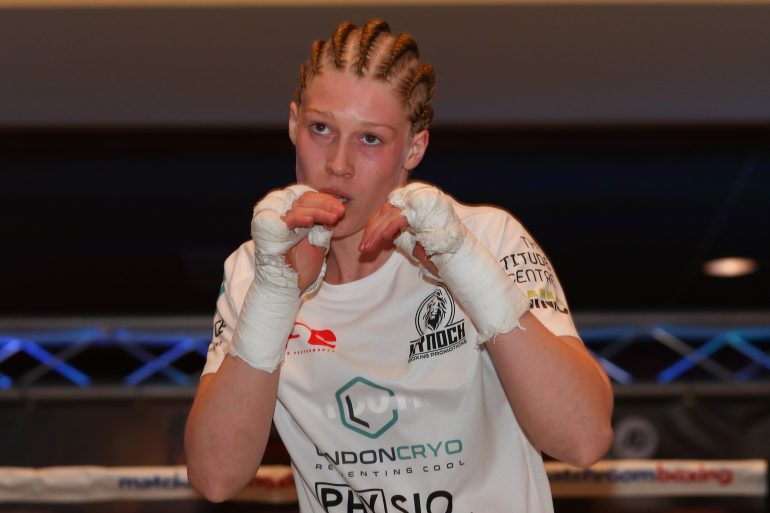 Going from a world title shot against Alicia Napoleon to a fight against two-time Olympic gold medalist and unified middleweight titleholder Claressa Shields is a tough ask for any fighter, particularly for one whose boxing experience is limited to a few white collar bouts and seven pro fights.

Ask Hannah Rankin, and the pressure is something she’s been getting ready for her whole life, even if her boxing resume’ wouldn’t suggest that. That’s because she’s used to high pressure situations as a classically trained musician, playing the bassoon in orchestras all over Europe, all the way to India where she once taught music. The Scottish-born, London-based fighter is used to performing at a high level with all eyes – and ears – on her.

“Some people think being a boxer and a musician is completely crazy but for me they perfectly make sense,” said the 28-year-old Rankin (5-2, 1 knockout), who challenges Shields this Saturday at the Kansas Star Arena in Mulvane, Kansas.

“In music you can’t really afford to make a mistake because you’ve got one chance to do it. Playing the bassoon is a solo instrument; a lot of times you are playing some of the big parts of the piece in the performance. It’s a different sort of adrenaline, you’re with a full orchestra and you’re all trying together as one to create an amazing experience for the audience and yourselves. As a boxer, it’s you and one other person in the ring so that’s a different sort of adrenaline.”

Her “day-to-day job” is teaching music theory at private schools around London, giving private lessons, and playing with a wind quintette, but it was combat sports that came into her life first. At age 9, she and her younger sister enrolled in taekwondo classes in, and by secondary school her mother urged her to pursue music instead. She started out on the flute, and then when someone donated a bassoon to her school, she figured she’d focus on a different woodwind instrument from most of her classmates.

She obtained her first degree from the Royal Scottish Conservatoire in Glasgow, and then finished her masters at the Royal Academy of Music in London. Yet even as music shaped her life, the fighting bug was still with her. She began practicing Muay Thai before moving to London where she met Noel Callan and Derek Williams, who are still her boxing trainers to this day. After a few white collar fights, Rankin opted to turn pro instead of pursuing the amateurs so she could stay with her team.

Things have moved quickly for Rankin; she won her first two after turning pro in May of 2017 and then lost a split-decision in Norway to Joanna Ekedahl. Less than a month later she was back in the ring and began a three fight winning streak, punctuated by a shutout of unbeaten Sanna Turunen this past June. Two months after that, and just a few years after picking up boxing, Rankin was in her first world title fight, for the WBA super middleweight title, in Long Island against Alicia Napoleon.

Despite being the only title fight on the PBC card, Napoleon-Rankin was relegated to the walkout bout, with almost all of the media on hand backstage for the press conference that was ongoing simultaneously.

“I was really proud of my performance,” said Rankin, slightly still irritated about the fight not being shown on either of the two broadcasts emanating from that show. She insists the fight was closer than shown on the scorecards, but still finds the positives in defeat.

“I learned that from the fight. You can’t buy experience, getting in there is the only way you’re gonna learn things. We took the fight because I’m never gonna turn down a fight and I just came up a little short.”

There are no concerns about exposure in her next fight, which will be shown as the co-featured bout on a Matchroom Boxing-promoted card on DAZN in the U.S.. It’s a platform that women couldn’t have dreamed of at the turn of the decade, but with women’s boxing gaining more credibility through the successes at the Olympics by the likes of Shields and Katie Taylor, and the final event to be broadcast on HBO will feature Cecilia Braekhus.

Rankin will have more than a few watching the fight back home on Sky Sports in the United Kingdom, including one of her young students who is around age eight and is captivated that someone can balance two seemingly divergent paths in life.

“She thinks it’s really cool. When I saw her last week for her last lesson before I came out here she was like ‘I can’t believe I’m saying this, I’m excited, I’m gonna wish you luck for your fight in America. I hope you bring the belts back for me to see when you get back,’” recalls Rankin. 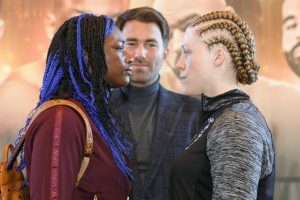 “I’m not overwhelmed or intimidated by her,” says Rankin. Photo by Ed Mullholland/Matchroom Boxing USA

Rankin had been expecting to face Lisa Garland on November 3, while Shields had been set to face Christina Hammer, Rankin’s sparring partner, on this date. When Hammer withdrew with an unspecified medical issue, Rankin stepped in for the bigger opportunity.

Shields and Rankin have been trading plenty of jibes on Twitter in the abbreviated build-up, as was chronicled by the DAZN Twitter account here. Rankin had said at the first press conference to announce the event in New York that she didn’t feel the need to talk trash, and still feels she lived up to that promise.

“All of the stuff I said back to her on Twitter is true,” said Rankin. “I think she likes to hide behind this bravado and this stuff that she puts out on social media. Even at the press conference she said ‘yeah I say my stuff on social media,’ but why won’t you say it now? I’m not overwhelmed or intimidated by her.”

She feels Shields “can’t help herself” when it comes to airing grievances on social media. Part of her outbursts are performance and for promoting her fights, Rankin believes, but she isn’t convinced that it puts the best image forward for women’s boxing.

“I think some things she says, one minute she thinks one thing and the next she thinks anything thing. You can’t take anything she says really at face value because you never really know what she’s thinking. I think she uses social media to vent with her angers and frustrations. I don’t think she really projects herself well on there,” said Rankin

“I’m not a big fan of the trash talking thing but her argument is that it gets people more involved in the sport. Each to their own but I don’t feel that she’s as great a role model as she could be for this sport.”

One thing Rankin can’t criticize are Shields’ achievements, which are numerous despite Shields’ young age of 23. Shields won her first world titles in August of 2017, defeating Nikki Adler to win the IBF and WBC super middleweight belts before dropping down to 160 to win the WBA and IBF belts against Hannah Gabriels. The winner will leave with three belts, with the WBC belt vacated by Hammer also in the mix.

Shields asserts that Hannah Rankin is not Hannah Gabriels, Rankin believes the knockdown scored by Gabriels in the first round was more than a fluke.

“I think that she’s more vulnerable than people might think. I don’t think it was an anomaly at all, I think it was a fantastically timed uppercut by Hannah Gabriels and that was a great shot. Sometimes I think people should not believe so much of the hype; everybody is beatable and I feel like that that showed that there is a way to get to her and find openings,” said Rankin.

(READ: Claressa Shields isn’t interested in being a well-behaved lady)

Rankin still has plenty of dreams she wants to accomplish in life, like playing with the Metropolitan Opera in New York, or performing at the Royal Opera House in London. She’s a significant underdog this Saturday, but Rankin is confident she’ll be walking out of Kansas with the belts. While Shields has repeatedly reminded her that Rankin has never seen anything like her, Rankin feels the same can be said for Shields.

“I feel I’m definitely 100 percent positive that I’m gonna be walking away as a unified world champion. I’m growing as a fighter so there’s gonna be a whole load of new things coming at her on Saturday night that she won’t be prepared for,” said Rankin.