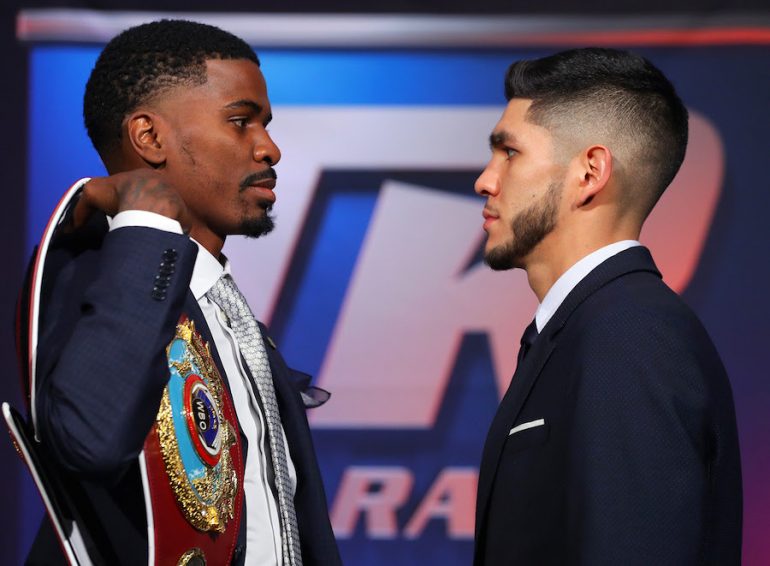 Sure, one night earlier he punched his ticket to a title shot in thrilling fashion, but now his face was a swollen mess, his head throbbing.

Lenny Zappavigna, a hard-nosed Australian, stunned Saucedo in Round 4 and almost finished the Mexico native. Saucedo, of course, rallied and stopped his foe three rounds later in a display of the kind of resilience that now defines him. He’s also known for his defensive limitations, and during breakfast that morning in his native Oklahoma City, he acknowledged the obvious to his manager, Sam Katkovski. “I gotta work on not getting hit like that.”

That’s exactly what Saucedo focused on during his seventh camp in Big Bear Lake, California, with trainer Abel Sanchez, well-regarded for his work with former middleweight champion Gennady Golovkin.

Now, Saucedo (28-0, 18 knockouts) hopes to become the next titleholder from the Sanchez stable. He meets Maurice Hooker for his WBO junior welterweight title Friday in Oklahoma City (midnight ET, ESPN), and yes, defense will be on his mind.

“This is the opportunity I’ve been looking for since I started boxing,” Saucedo told The Ring during a media luncheon last Friday at L.A. Live. “Now, it’s here. I’ve been very motivated throughout camp. It’s been a whole different motivation this camp.”

That’s usually the case for an upstart fighter on the cusp of his first crack at a strap. Saucedo remains raw at 24 years old. He possesses solid power and loves to pressure opponents, but his propensity for an all-out offensive attack has left him vulnerable on numerous occasions.

Saucedo ran into massive trouble against the lightly regarded Abner Lopez in March, but he withstood the onslaught — and the nasty gash under his right eye — for another seventh-round TKO win. Against Hooker, he’ll need to be at his best.

The 29-year-old native of Dallas is a rangy boxer who will look to keep Saucedo on the outside with his long jab. Hooker won’t just be contending with a hostile environment; he’ll need to deal with the 18-by-18 foot ring being set up to give the hard-charging fighter an advantage.

Hooker (24-0-3, 16 KOs) won the 140-pound title with a split-decision victory over England’s Terry Flanagan at Manchester Arena in March, so he’s no stranger to travelling for a big opportunity.

“I’ll fight anywhere. Outside your house, in front of your house, in the ring, on the sidewalk,” Hooker said this week. “I don’t care where I fight as long as I fight. I’m a fighter. I love to fight. I can outbox him. I can fight you on the inside. Come Friday, we’re going to see a good fight.”

Saucedo has established himself as one of the sport’s most dependable action fighters; he’ll need the fight to be entertaining if he has a chance of grabbing the belt. He has dreams of unifying with fellow Top Rank boxer Jose Ramirez next year, but it’s just that right now — a dream.

“That’s the goal, that’s what we want,” Saucedo said. “But right now we’re just focused on Maurice Hooker because It’s a tough fight. … Happy that the opportunity is here For the people to know who Alex Saucedo is, the world to know. I’m ready to get Maurice Hooker out of the way and then we’ll move on to bigger things.”

Saucedo promises to stay on Hooker throughout the 12-round affair. He finds comfort in familiarity. They sparred each other countless times at Maple Avenue Boxing Gym in Dallas, sessions Saucedo claims he dominated at times. He’s confident Hooker has issues with pressure and if he can dictate the pace, Saucedo could win the title in front of his hometown fans.

“We both were young back then,” Hooker said. “We got better. I got better. He’s better. I just got a little more better than him.”

If that’s true, it’ll all become clear in the ring.