Tito Ortiz: I’m trying to help Chuck, he needs money, but I get a little revenge 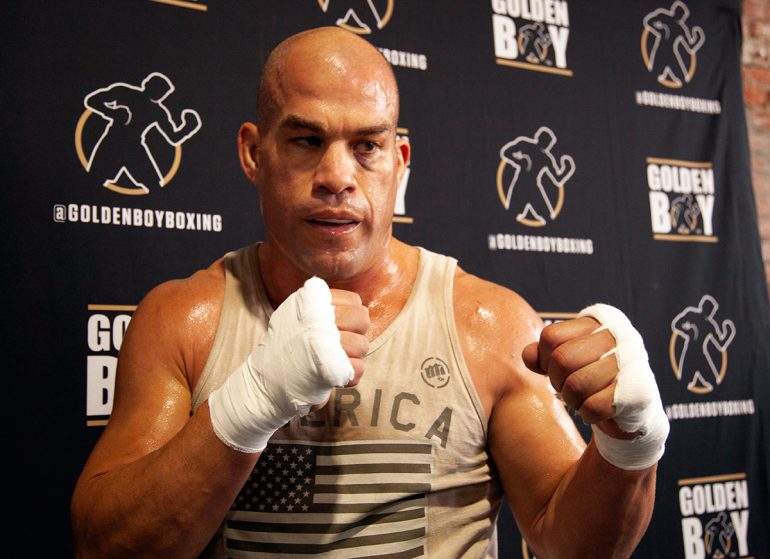 As much as it being a face-off between two rivals for the ages, two legit Hall of Fame characters in the MMA realm who will go down as building blocks in phase two of the growth story of the sport, the Nov. 24 Tito Ortiz v Chuck Liddell fight, promoted by Golden Boy, is a fight for identity.

Liddell (21-8) is 48 (and 9/10ths), hasn’t fought since 2010, and thought he was finished with the physical side of the sport, before his slot with UFC management was terminated when new owners refused to honor a verbal commitment to the man. So, he is going to back to what he knows and has done best….fighting. There is no shortage of pundits and fans who wish he’d stayed in coat and tie and wasn’t seeking to flip the script on aging. But circumstances and his genetic and characterological tendencies have him putting on the small mitts and looking to go 3-0 versus Ortiz in Inglewood, California, and on PPV, in less than two weeks.

Ortiz, he’s 43, and I see him as the favorite in this one, because the coating of rust he’ll need to shed isn’t nearly as thick as Liddell’s. The smack talker who holds a creeping toward .500 (19-12) record, shared with media at a recent workout his thoughts:

“The influences throughout my career had to be Muhammad Ali and Hulk Hogan. Ali, of course, I’m in a combative sport, and Hulk Hogan in sports entertainment, and I try to find the medium in between of being flamboyant and being confident of knowing the work I put into it. Of course, you have to win the fight in order to back up the talk.”

But of course, the topic of age came up…

“The number of age is just a number, I’m 43 years young and I feel better now that I’m 43 then when I was 34, just because of the injuries I’ve been able to recover from. I’ve had four neck surgeries, I’ve had a back surgery and two knee surgeries but I’m able to push the tempo through and I’ve been able to get the training that I want… but I think it’s just the mindset,” said Ortiz. 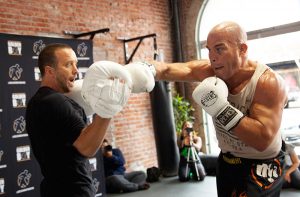 Ortiz hits the mitts at a recent media workout. Photo by Matt Tucker

He took an oblique shot at Liddell, then. “I take care of my body, I don’t go out and party, I don’t do drugs because in this job of being a mixed martial artist you have to be professional, you have to take it seriously because once you step in the cage against another person they’re trying to do the same damage you’re trying to do to them. You gotta make sure you’re prepared for it and throughout my career of 21 years I think I have prepared the right way physically and mentally. When it’s training time I grind, I put in the work, I don’t look for exits I don’t look for easy ways out, I try to find the hardest way to possibly do it. I push myself even harder and I think that’s what makes me who I am.”

He also shared some of his training mindset, which he’s used as a mantra to push himself. “There’s always been three things I’ve had in my life and I try to push myself as hard as possible, I push myself to throw up, pass out or die. I’ve thrown up a bunch of times, I’ve never passed out and I’m still sitting right here, so I just try to push myself that hard every time I train because when I get in the cage and I fight against another person I want to make sure I prepared for the worst so the best can happen.”

He also dug deeper into how and why this match was made. “This match against Chuck Liddell, yes this is about revenge, (but it’s also) about redemption. It’s about getting the opportunity to fight someone that used to be my friend, that was a close friend of mine, that sold out on me because he wanted to go to a company. Now all of a sudden 10 years later the company dumped him and he has to fight. I’m trying to help Chuck, if he needs money that bad, I’m trying to help him out but I get a little revenge. This isn’t for a championship, this is for redemption, this is for an opportunity to beat someone that beat me twice… and people don’t think I have a chance but on November 24 I’m gonna show how vicious I truly am, as I stand on Chuck Liddell when he’s knocked out unconscious on the canvas.”

Tough talk…good for marketing. Good for selling the scrap. And good for Ortiz as he summons the energy needed to keep grinding, even as those areas in his body where he’s had surgeries bark at him to find a new vocation.

(Highlights from Ortiz’ last fight, a choke out win over Chael Sonnen.)

My three cents: You can dismiss this as two past-their-prime guys, but I will indeed tune in, because of the curiosity factor. We’ve come to get to know these two through their collective decades in the sport and I can’t help but stay somewhat invested in their career and life arc. Whose fate will take a darker turn on Nov. 24, who will be able to rise above and enjoy the result that will enable them to push forward in this sweet and savage science? Time will tell us.