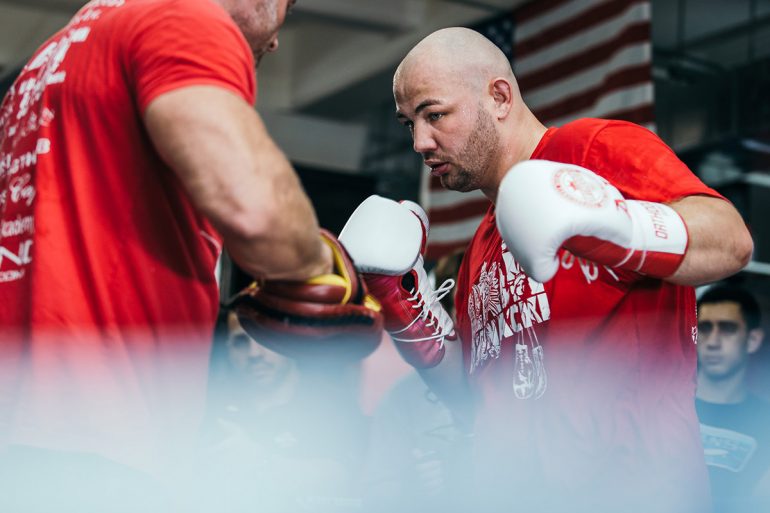 Three years ago, you looked, maybe, at Adam Kownacki and thought, “OK, I see a club fighter.”

Not body beautiful, skills a bit basic … he is what he is.

But maybe you had a lack of imagination at the time.

You didn’t give him or the human animal in general credit for being able to plow forward, and improve, and also for the concept of attrition. As a Kownacki keeps on soldiering on and refining his skills, elders in the division lose steam, fall prey to aging, and that leaves them more vulnerable.

We could be seeing THAT in play when Kownacki (18-0; last fought in September at Barclays, beating Charles Martin), age 29, gloves up on January 26 to face Gerald Washington at Barclays Center in Brooklyn, on a card topped by Keith Thurman’s comeback against Josesito Lopez.

Washington is 36 years old, a full-on gatekeeper who lost to Deontay Wilder and Jarrell Miller before returning to the victory lane against John Wesley Nofire in his last outing, in June. So, Mr. Kownacki, do you see Washington as a step up?

“Definitely, I had him winning versus Wilder until he got caught,” Kownacki told me.

“Bring that pressure,” he said. “Which has been working for me. Good head movement, which I’m working on to improve. I can’t wait to be back at Barclays Center. I’m very excited for this new deal with Fox. It will bring great fights to everyone for free!”

And what did he learn from that last outing, when he took down ex-IBF titleholder Martin, who came to the table with an extra measure of motivation, because he’d been busted on hard after folding up against Anthony Joshua. “Don’t say a man has no heart before a fight. It will put him on a mission to show you otherwise!”

We chatted with Kownacki before that last scrap, and he told us he’d tweaked his diet and that it was paying dividends. Where does that element of his training stand?

My three cents: Kownacki has been the tortoise to get here. Steady pace — not fast, but steady. Don’t pre-judge based on body type or whatever. The guy has determination and grit. And sometimes those two traits are as important as anything else being brought to the table.