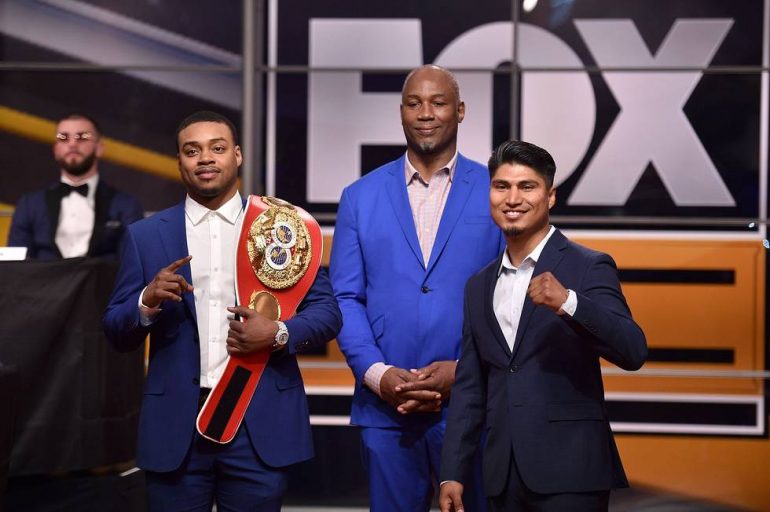 LOS ANGELES — For years, Fox has broadcasted the biggest events in sports. The Super Bowl. The World Series.

Two months after Premier Boxing Champions announced a four-year partnership with Fox that includes significant license fees, the slate was unveiled Tuesday at the 20th Century Fox headquarters in Century City against the backdrop of a video package that highlighted their upcoming schedule with Chris Myers introducing each fighter.

The biggest fight of them all: Fox’s maiden voyage on pay-per-view, a March 16 welterweight title tilt between Errol Spence Jr. and Mikey Garcia at AT&T Stadium, home of the Dallas Cowboys.

“That’s why I’m taking it, because it’s such a big challenge for me and that’s what I’m all about,” said Garcia, who will be chasing a title in a fifth weight class. “There’s no one else out there right now that I can compete with on that level. Spence is that guy.

“It’s going to be a great fight, and this is one of those rare occasions when the little guy beats the bigger man.”

It’s the first true mega fight on the PBC on Fox schedule, but there were another five title fights announced over the first quarter of 2019 (in addition to the previously announced inaugural show featuring the Charlo twins on December 22.)

Jose Uzcategui defends his super middleweight title against Caleb Plant at Microsoft Theater in Los Angeles on the first show of 2019, one of 12 FS1 telecasts.

Later in the month, on January 26, Keith Thurman makes his long-awaited return after almost two years away from the ring. He defends his welterweight title against Josesito Lopez in Brooklyn, New York. It’s one of 10 telecasts on Fox.

“I’m going to prove that I’m the best, that Keith ‘One-Time’ Thurman, I’ve been the problem, I am the truth, your boy is swift,” said Thurman, who hasn’t competed since March 2017 as he dealt with a litany of elbow and hand injuries. “I plan on keep doing it. … I’m itching. We got the fight date, I’m truly looking forward to it, and I’m going to perform like I always do.”

Heavyweight contender Adam Kownacki fights Gerald Washington in the co-feature that night, and then in February, featherweight titleholder Leo Santa Cruz stays busy with a defense against Miguel Flores on February 16 on Fox.

Anthony Dirrell and Avni Yildirim meet on February 23 in Minneapolis (FS1) for the super middleweight title vacated by David Benavidez. Another 168-pound bout on FS1 pits Caleb Truax against Peter Quillin on April 13, also at The Armory in Minneapolis.

One week before Spence and Mikey square off on pay-per-view, Shawn Porter defends his welterweight title against Yordenis Ugas (Fox) at T-Mobile Arena in Las Vegas.

The other bouts on the schedule also take place in the stacked 147-pound division: Lamont Peterson-Sergey Lipinets on March 24 in Maryland (FS1); Danny Garcia vs. Adrian Granados on April 19.

There’s only one man on top of the welterweight division right now, though, and that’s Spence.

Lennox Lewis, Erik Morales, Ray Mancini, Myers and Kenny Albert are part of the teams that will call those bouts.