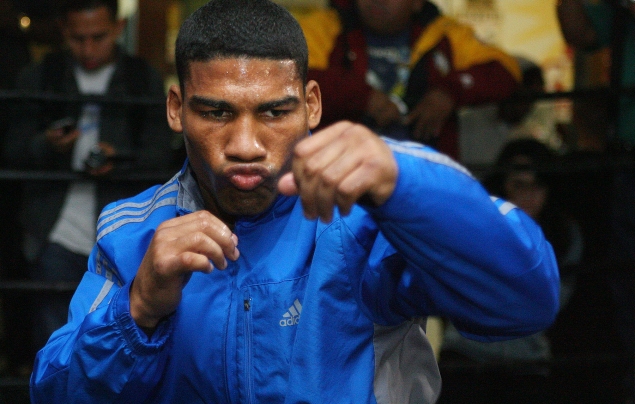 The 36-year-old Cuban — who had 300 amateur fights and was an Olympic gold-getter and former titleholder at 126 — contested this one lightweight with a 28-2 (17 KOs) mark coming in.

In the first, Gamboa looked fresher and quicker than the guy who won the co-feature, Juan Manuel Lopez.  Yuri pumped a jab and kept his head movement to avoid counter hooks from the loser. Down went Beltran near the end of the round; a right hook did the damage.

In Round 2, Gamboa looked light on his feet; he looked in good shape, with good reflexes for 36. We saw Bones Adams helping Gamboa in the corner, for the record. But the Cuban didn’t heavily press the first-round edge; he wanted to be better safe than sorry.

In the third, we saw the Gamboa handspeed edge in effect. Beltran was 1.5 steps behind and hoped to catch Gamboa in a sloppy second.

It looked like sparring between a seasoned ace and B-guy who had desire but not the skill set to stay stride-by-stride.

In the fourth, Gamboa was in a mode; he was moving, popping, sliding, not flurrying too much and getting wreckless. Beltran wanted to land a left hook if and when Gamboa dropped the right mitt stationed by his chin.

In the fifth, Gamboa grabbed a couple times to slow down Beltran’s aggression. Yuri looked relaxed and confident and ready to do 10. The sixth had more of the sparring vibe. Same for the seventh; Gamboa boxed smart, cautious and without an excess of ferocity. He was going for the safe W, it looked like. To 8; we saw more holding, with Gamboa telling us that he wanted to give his legs more rest. Beltran had no Plan B, no way to change the momentum.

In Round 9, Gamboa stayed busy enough to take the session and alert enough to not get whacked by a shot taking advantage of sloppiness. In the 10th, Gamboa stayed wise and alert and took no unnecessary risks. He did wing some hard hooks to give the fans a little uptick. We waited for the scorecards: 99-90, 98-91 and 100-89 for Gamboa.

Puerto Rican ultra-vet JuanMa Lopez (36-6, 32 KOs) came to the ring with a full beard and hopes that, at 35, his power would still be present and his chin would hold up. Yes and yes … After 10 rounds and four knockdowns against an overmatched but game Cristian Mino, JuanMa got the love from the judges by scores of 97-88, 96-89 96-89.

He swung for the fences some at the end of the first, against Mino (19-3, 17 KOs). Lopez was dealing with some rust issues, being that he took 2015 and 2017 off and last gloved up in March, losing via stoppage to Jayson Velez.

In Round 2, we saw the lefty come forward, looking to land thunder against the 22-year-old Argentine. Mino wanted to land a counter right and had a solid second.

In the third, the right hook from JuanMa clanged home, but Mino hung tough. He slid mostly to his left and toward that right hook. Lopez sent Mino down in the third with one such punch, and a left hook sent him to the mat again right at the end of the round. Mino rose and walked back to his corner groggy.

Mino’s dad, Ruben, gave counsel with hope and trepidation in his voice. Mino took wild stabs at the PR hitter and then got smacked with a left — the third drop to the mat. In the final minute of the frame, Mino tried to roar back; props to his stubbornness.

JuanMa, whose train was twice derailed by Orlando Salido in 2011 and 2012, had subsequently lost to Mikey Garcia, Francisco Vargas, Jesus Cuellar and Velez. A right from Mino buzzed JuanMa in the fifth and sent him back with buckled knees. He collected himself and finished the round with clear eyes.

Mino was down again in the sixth off a body shot, but soldiered on. He sought to land a power right, but JuanMa stayed on message enough defensively to avoid the tag. In Round 7, we saw JuanMa keep trying to chop down the tree, which was bent but still upright enough to keep campaigning. Round 8 saw Mino start grabbing more when he got smacked. Ref James Warring asked Mino if he wanted to continue, as his fatigue was evident. Mino was stumbling but still throwing the odd right haymaker.

In the ninth, we saw Mino trying to shuffle away from getting whacked more. He’d try to land a power right, his balance atrocious but his will to compete still in play. His right eye was swollen and Col. Bob Sheridan, the blow-by-blow caller, noted that it didn’t look like a commission doctor was looking at the damage. In the tenth and final round, JuanMa didn’t run out the clock; he still craved a KO. The ref took a point from Mino for holding to add to the list of woes for the loser.

After Gamboa won, JuanMa, in street clothes, invited him to fight in a few months. The card’s two winners seem to be on a “better later than never” collision course, with word out that they’ll perhaps have a showdown in March.

Michael Woods is a Brooklyn resident and saw the new Grinch movie with his daughters on Saturday night. Follow him on Twitter.