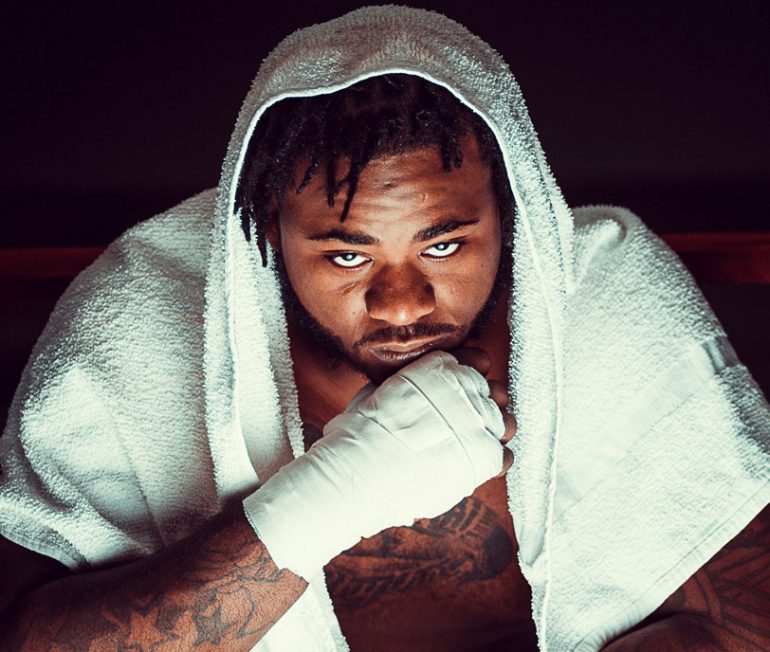 On the latest edition of the Everlast podcast “Talkbox,” one of our guests, author Brin-Jonathan Butler, absolutely savaged the state of the heavyweight division.

Woods, he said, Butterbean would be a top 20 guy today … and Tommy Morrison would rule with an iron fist.

OK, not so sure on the Butterbean assertion, but point taken.

This I will acknowledge: There have been deeper eras than this one, and yes, we are always looking to welcome new blood and A-grade talent into the bullpen.

Promoter Dmitriy Salita inists that he’s brought a good one into his Salita Promotions fold in 17-0 Michigan resident Jermaine Franklin. The 25-year-old grew up in Saginaw, stands 6-foot-2 and typically fights in the high 220s to low 230s.

I chatted with the prospect to get a better sense of who he is and where he came from.

“I had got into a couple fights at school and my stepfather, Darwin Lamar, asked me, did I want to box since I was pretty good at fighting,” he said when I asked what brought him to pugilism.  “I said yes, and the rest is history. By the way, I think my stepfather was being over-dramatic, since I only had two fights in school,” he said, chuckling.

No, he didn’t come from that prototype busted-up home in a neighborhood where hope goes to die. “We struggled a little, like some families, but my mom and dad made sure I wanted for nothing.

“My mom is Andrea Lamar and my dad is Jermaine Franklin Sr. I have one sibling on my mom’s side, Dar’yae Lamar, and I have four siblings on my dad side: Arionna Brown, Jah’lon, Joseph, Jah’yonna Franklin.”

Pretty early on, the kid knew the ring would be his place to shine. “Round the 4th grade I knew I had something special going on with my fists,  but I honestly didn’t think about it till after I won the Golden Gloves in 2014.”

Watching Franklin, he might hope you see echoes of some of the greats when he tussles. He loves Holyfield’s heart, Ali’s movement, Holmes’ body attack and the all-around chops of Floyd and Roy.

As for things he’s working on, Franklin moving forward wants to work on staying patient, waiting for the opening, not pressing impatiently.

On tape, you see impressive patience. He picks off shots, parries, stays balanced while keeping his head about him. He seems light on his feet and seems to own solid pop in his right hand and a quick left hook. Franklin knows that KOs make fans happy and isn’t afraid of pressing the issue when his guy is wounded. He could stand to mimic Holmes more with the jab, though.

I checked in with Salita to get more intel and insights. What are Franklin’s top assets?

“He has fast hands and fast feet, throws exciting combinations, is very athletic and flexible for a heavyweight. He had a very good amateur career, winning the Golden Gloves Nationals, beating Cam Awesome and Cassius Chaney when he was just a teenager.  That is very impressive!”

OK, do you want him on a fast track then?

“The heavyweight division has been circulating and recycling same names over the last few years,” said Salita, who shared that he’s talking to top-tier platforms about getting Franklin on as a regular player.  “It’s exciting to see a new face who has got the credentials and talent to be an American heavyweight world champion. As a young fighter, he showed tremendous desire to be the best by not cherry-picking his opponents at any stage of his development. If you look at his resume, he beat four undefeated fighters and some very good gatekeepers, such as Craig Lewis, Ed Fountain, Akhror Muralimov and several others. That’s a very impressive resume for a 25-year-old heavyweight. He is getting better with each fight, and today I feel he can beat many guys in the top 10.”

I played a game with the boxer: Where does he see himself in 2019?

“Ranked in the top 10 worldwide, competing for a title shot and starting my non-profit in Saginaw, Michigan, to help other kids dream big and help them make the right decisions in life!”

For the record, Jesse Addison is his head trainer and Lorenzo Reynolds also helps out.

And you know my take on the kid went up a notch when he told me, “It’s important to me that I give back to the youth of Saginaw. It keeps me grounded and instills pride in my first love, boxing!”

So … Jermaine Franklin is on my watch list. Looks to have some talent and seems to be a good citizen, to boot.