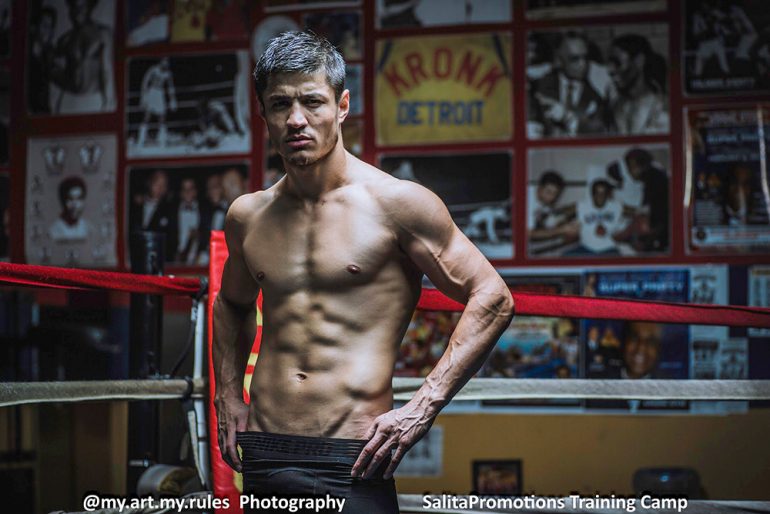 Hard-hitting junior welterweight prospect Shohjahon Ergashev will look to cap off a busy 2018 on Saturday when he appears on the undercard of the World Boxing Super Series cruiserweight tournament doubleheader at the UIC Pavilion in Chicago. The main event will feature former world champion Krzysztof Glowacki (30-1, 19 KOs) vs Maksim Vlasov (42-2, 25 KOs).

Ergashev (13-0, 12 KOs) will step into the ring for the fourth time this year when he takes on Zack Ramsay in a six-round bout. Ergashev is coming off a stoppage victory over Juma Waswa this past August in Moscow, where Waswa’s corner elected to stop the bout after four rounds of non-stop punishment.

The 26-year-old Ergashev, who was born in Uzbekistan, began his professional career with nine bouts in Russia before signing a promotional contract with Dmitriy Salita’s expanding Salita Promotions stable, which is based in New York and Detroit. It’s in Detroit’s famed Kronk Gym where Ergashev is making a second home.

“I am very excited to be back fighting in the United States on such an important card,” Ergashev said this week. “I am excited to show my skills to the great and knowledgeable boxing fans in Chicago.”

While Ergashev is appearing on the undercard of the cruiserweight tournament, it’s not lost on him that there is a 140-pound tournament also in progress featuring the likes of world champions Regis Prograis, Ivan Baranchyk and Josh Taylor.

“Of course I would love to compete with the best fighters in the world, but I believe in my team and they believe in me,” Ergashev added. “I fought on U.S. TV before and am looking forward to appearing on television again.”

With the likes of Showtime, ESPN and DAZN in competition to snatch up the best fighters in the sport, it remains to be seen who will end up winning up the ultra-popular Ergashev, who has become a national hero in Uzbekistan. Ergashev’s highlights have racked up hundreds of thousands of views on YouTube and his Instagram account has 279,000 followers.

“I have no doubt Ergashev is the best super lightweight in the world,” said Salita. “He is so disciplined in the ring and in training. He also is one of the hardest punchers I have ever seen below the heavyweight division. He hurts bigger guys in the sparring all the time”

“Fighters like Ergashev come along rarely, and when they do it’s extremely challenging to beat out other promoters to sign them,” Salita said. “I feel with Ergashev all the stars aligned, and he loves working out in Detroit. It’s the perfect atmosphere and I feel he is still getting better, which is scary.”

Ergashev opened 2018 with a dominating third-round TKO victory over previously unbeaten Sonny Fredrickson on Showtime’s popular Shobox: The New Generation series. It will be interesting to see which network or streaming service opts to go all in on Ergashev.