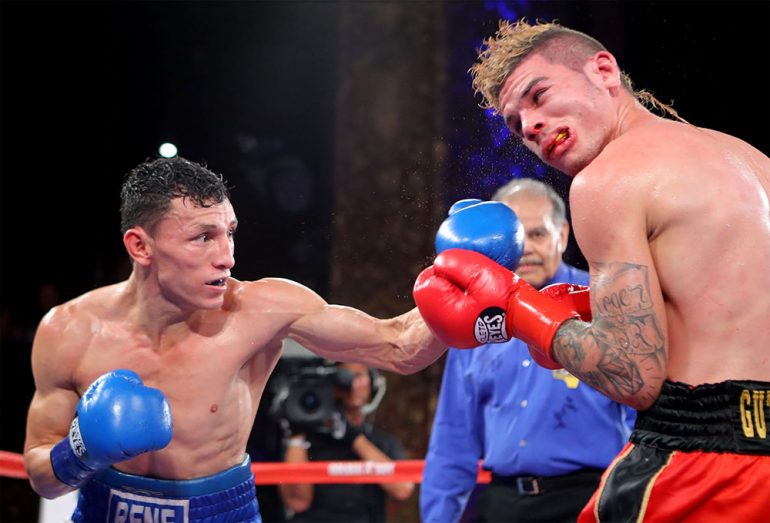 Rene Alvarado vs. Roger Gutierrez in their first fight in July 2017. (Photo by Tom Hogan / Hoganphotos)
06
Nov
by Francisco Salazar

Junior lightweight contenders Rene Alvarado and Carlos Morales will clash in a WBA eliminator on December 8, with the 10-round bout to take place at the Fantasy Springs Resort Casino in Indio, California. The fight will be streamed live on Facebook Watch.

Alvarado and Morales will be battling for the WBA No. 1 contender spot, which Alvarado currently holds, and the right to face “regular” titleholder Alberto Machado (Gervonta Davis holds the WBA “super” title recognized by The Ring). Morales is ranked No. 10 by the WBA.

Alvarado (29-8, 20 knockouts) has seen a resurgence in his career after being used as a gatekeeper in losses against the likes of Joseph “JoJo” Diaz, Andrew Cancio and Manuel “Tino” Avila. He has won his last five bouts.

In his last bout on March 23, Alvarado knocked out Luis Gonzalez in the first round in his hometown of Managua, Nicaragua, in a stay-busy fight. Alvarado’s most impressive win to date was a split-decision victory over former world title challenger Denis Shafikov last December.

“Fans in the United States know me because they know that I’m a true warrior,” said the 29-year-old Alvarado, who also has victories over Jayson Velez and Robinson Castellanos. “I’m always given tests, and I always pass them.”

Morales (17-3-3, 6 KOs), who resides in the Los Angeles neighborhood of Highland Park, has lost two of his last three bouts. In his most recent fight on September 1, Morales lost a 10-round majority decision to unbeaten Ryan Garcia.

The 28-year-old Morales lost a 10-round unanimous decision to Machado on August 18 of last year.

“I am really excited to finally face Rene Alvarado,” said Morales, who notched a victory over Dardan Zenunaj on December 14. “He’s a great warrior who has faced tough competition. He is ranked number one by the WBA. We have contrasting styles, and this is a must-watch event.”

Unbeaten contenders and prospects will round out the Golden Boy Promotions card.

Lightweight prospect Hector Tanajara Jr. (15-0, 5 KOs) of San Antonio will take on Phoenix’s Roberto Manzanarez in a 10-round bout. Tanajara, who is trained by Robert Garcia, defeated Emmanuel Morales by unanimous decision in his last bout on August 10.

Manzanarez (36-2, 29 KOs) lost by majority decision to contender Mercito Gesta in his last bout in June.

Featherweight Joet Gonzalez (20-0, 11 KOs) and junior welterweight Luis Feliciano (8-0, 5 KOs) are scheduled to fight on the card in separate bouts.