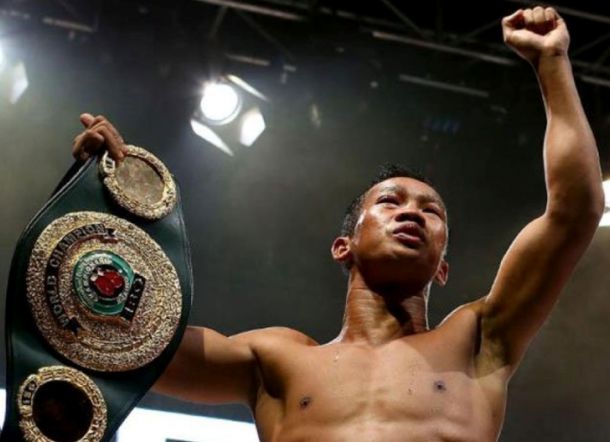 Hard-hitting Indonesian Daud Yordan will face Anthony Crolla in a 12-round WBA 135-pound title eliminator as chief support to the undisputed cruiserweight championship clash between Aleksandr Usyk and Tony Bellew at the Manchester Arena in Manchester, England, on Saturday.

Yordan (38-3, 26 knockouts) is unbeaten in eight fights over a five-and-a-half-year period and is coming off an impressive knockout over previously unbeaten Russian Pavel Malikov earlier this year.

The 31-year-old power-puncher has long campaigned for a fight with one of the best in his weight class and was only too happy to oblige when he was offered a fight with the former WBA lightweight titleholder.

“It is an honor for me to fight against former world champion Anthony Crolla in his hometown,” Yordan told The Ring through Urgyen Rinchen Sim of Mahkota Promotions. “It’s an opportunity for a WBA world title eliminator on a big show at the legendary venue in Manchester.

“This fight is very important for me and my team. It will further advance our chance to become the world lightweight champion.”

Crolla, who is rated No. 5 by The Ring at lightweight, has won his last two fights after dropping a brace of decisions to the superb Jorge Linares. It’s a crossroads fight for the Englishman, who can ill-afford any setbacks at this stage of his career if he is to contend for another world title.

The Indonesian respects Crolla (33-6-3, 13 KOs) and anticipates a tough outing.

“Crolla is a very talented boxer,” said Yordan. “He’s full of fighting spirit and very experienced as former world champion. It is very hard for me to get his weakness.”

Yordan comes from humble beginnings in the small town of Sukadana, which is located near the jungle on the island of Borneo.

However, to prepare for this fight, Yordan has decamped from his hometown, where he owns a gym, to Bali for the past two months.

“We train hard here using the beautiful landscape of the famous Bali Island,” revealed Yordan. “From exotic beaches to the peaceful mountain beside our unique training camp which is located on the first floor of a church. I train my body hard and soul peacefully.”

Sim, of Mahkota Promotions, knows that this fight is vital to his clients next move. “We will come to British soil to fight for the honor of our nation,” he said. “This will be a very competitive fight; both have a good chance to win, but with all respect to Crolla we believe Daud will win.”

The bout will be broadcast live on Sky Box Office in the U.K. and DAZN in the U.S.