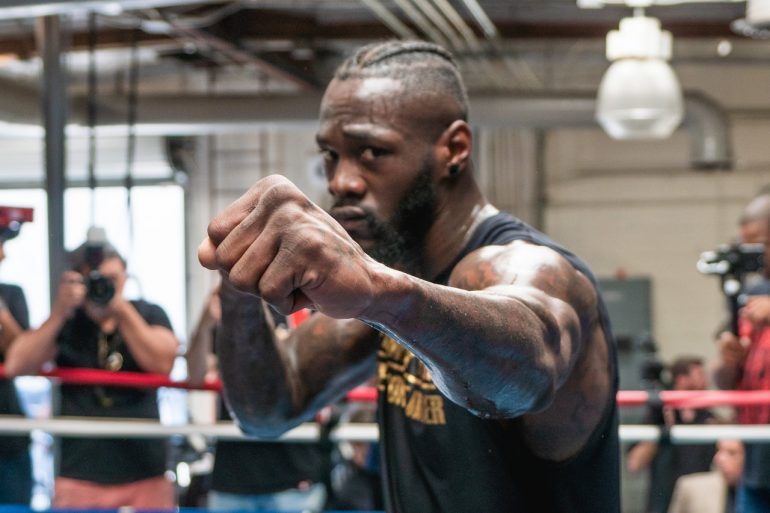 SANTA MONICA, Calif. — When Deontay Wilder steps over the ring ropes on December 1 in Los Angeles, he’ll be wading into uncharted territory. This much, the heavyweight titleholder admits.

Through 40 pro fights, Wilder has yet to face someone who can match his athleticism. Tyson Fury can do that and more. Fury is fleet of foot and owns a two-inch height advantage on Wilder.

The 30-year-old Brit is also the superior boxer; Wilder, of course, is the puncher. Only one of the 33-year-old’s opponents lasted the distance, and even Bermane Stiverne was vanquished in the first round of their rematch last November.

“I don’t know what Fury’s weaknesses are. I’ve never dealt with anyone who possesses what he has,” Wilder told a small group of reporters following a workout at Churchill Boxing Club on Monday, less than a month out from his heavyweight champion fight with Fury on Showtime PPV.

“I’m going to do things he doesn’t expect me to do,” The Ring’s No. 2 heavyweight added. “Fury thinks I’m going to just be following around him with a right hand — that’s stupid. There are a lot of things that are going to be a surprise to him once he steps into the ring. Everybody witnesses it when they fight me.”

Fury (27-0, 19 KOs) held three heavyweight belts following the win, but he never defended them. Instead, he endured a two-and-a-half-year hiatus amid a mental health battle along with addiction. He even ballooned to almost 350 pounds (Fury is now around 260, the weight he expects to hold on fight night.)

What Fury still holds is the lineal championship — the man who beat the man — and with two tune-up bouts under his belt this summer, Team Wilder is expecting the best version of “The Gypsy King.” To that end, Wilder’s trainer and co-manager Jay Deas has posters lining the walls at his Skyy Gym in Tuscaloosa, Alabama, that depict Fury draped in titles.

“Whoever wins this is the man, not just in boxing, but maybe in all of sports. We expect Deontay Wilder to be that guy.”