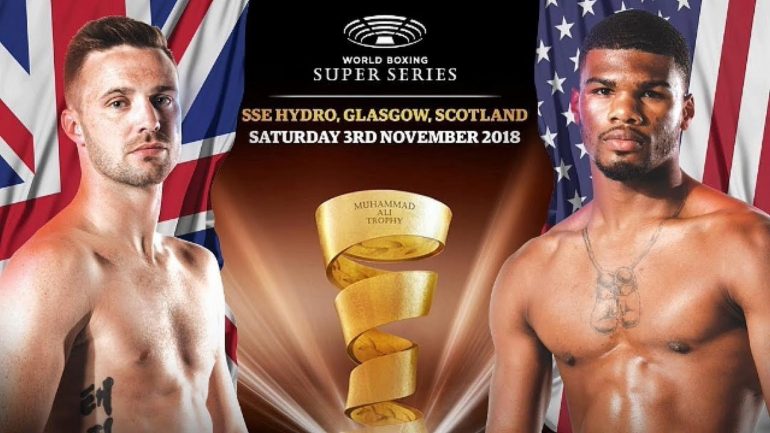 Just off from watching the WBSS card in Edinburgh and man that was high drama but also kinda bloody awful. I really feel for Ryan Burnett, who (I thought) was winning early and looked like he might have been on the way, though I also thought Nonito Donaire seemed to be opening it up in the fourth just before the injury. Sorry for both fighters it had to go down like that. Donaire’s conduct was beyond exemplary, and all the best to Burnett, who I still hope to see fight Zolani Tete, sometime. 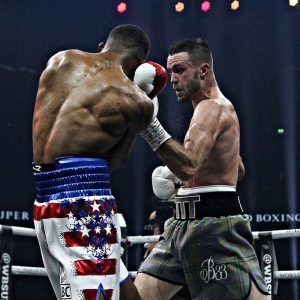 Taylor takes it to Martin. Photo by Shabaz Shafiq

And: What do you think about Ivan Baranchyk and Taylor; and Prograis and Kiryl Relikh? Both seem to me likely good style matchups. In the first: Taylor is a better boxer, but Baranchyk is just freakin relentless; I’d call that 50-50 unless Taylor shows yet another level. And, Prograis seems the big favorite, but Relikh is a badass too (with a couple highly iffy decisions against him), not an easy night out for anyone (not named Crawford). I could see him being Prograis’s hardest test.  With either Baranchyk or Taylor being an even harder test thereafter. Of those two I think Taylor is harder on Progais than Baranchyk because off his speed, and variation. While Prograis more than any of the other leading lights at 140, has the raw power along with the chops, to make Baranchyk pay and pay and pay for coming forward like he does. Anyways, I’m all into it now! – Cheers, Alec

As well you should be, Alec.

I think Taylor, even though he’s only got 14 pro bouts under his belts, can make an argument for being the best junior welterweight, so obviously, I’m going to believe that he can come up with the right game plan to neutralize Baranchyk’s power and aggression. I view it as 60-40 (or 65-35) for the Scottish southpaw. But I’m looking forward to witnessing how he does it (if he can do it). However that WBSS semifinal plays out, it won’t be a walk in the park for either junior welterweight. I think Prograis has a little too much of everything for Relihk, whose busy style and guts should make for a fun scrap, but I see the New Orleans badass outclassing the beltholder from Belarus over 12 rounds.

I really feel for Ryan Burnett, who (I thought) was winning early and looked like he might have been on the way, though I also thought Nonito Donaire seemed to be opening it up in the fourth just before the injury. Tough break for the Belfast native, but at age 26, time is on his side. He can rebound from this setback. It doesn’t hurt that he’s promoted by Eddie Hearn, the most influential 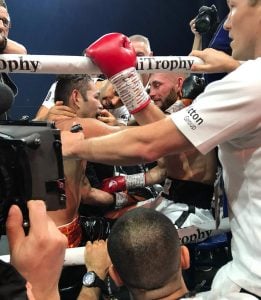 The always classy Donaire had a hug and words of encouragement to Burnett after their fight was halted due to the Belfast fighter’s injury. Photo / World Boxing Super Series

promoter in the U.K., and whose Matchroom Boxing probably does more shows (on both sides of the Pond) than any other promotional company. It also doesn’t hurt that Burnett’s first loss is to a future hall of famer who is the personification of class, and would gladly give him a rematch in the near future, or that the bantamweight division is among the deepest in the sport and the top guys seem willing to face each other.

Donaire’s conduct was beyond exemplary, and all the best to Burnett, who I still hope to see fight Zolani Tete, sometime. It could happen, but first we’re going to get the fascinating Tete-Donaire WBSS semifinal.

As for the Josh Taylor/Ryan Martin bout: “Creativity” is the word. (Taylor’s) got good skills, and he’s got good tools, but what he does with them is something else again. I agree 100%. As I tweeted maybe half a second before the fight was stopped, Martin was used to being the bigger, taller, rangier, better athlete against fairly one-dimensional opposition leading into his WBSS quarterfinal. But against Taylor, the American wasn’t only facing a fellow amateur standout who could match his size and athleticism, he shared the ring with a boxer whose mind is as fast as his hands. Taylor is quick at assessing his opponent’s strengths and weaknesses, and he has dozens of ways to get his offense going. The 27-year-old Edinburgh native’s versatility mentally handcuffed Martin.

And he was dogging Martin from pillar to post. Still! That knockout to the back of the head was an illegal punch… right? Is that fair play? It seemed iffy, and (further) detracted from the whole show. What do you think should have happened there? I think it was an iffy call by the referee, given the shot to the back of the head (which I believe was inadvertent on Taylor’s part), but it was also the right call. Martin had nothing to offer. Had Martin shown a little more drive or urgency during the previous six rounds, if he had even come CLOSE to winning a SINGLE stanza, I might have been upset by the manner that the bout ended, but the American was clearly out of his depth from the opening bell of the bout. Had Martin been given five minutes to recover, and had he survived Round 7, I believe he would have only subjected himself to more mental torment (from Taylor and his coach, Abel Sanchez, between rounds) and more physical damage. There’s no need for that. This was Martin’s first step-up bout, and it was a step too far. There’s no shame in that. He lost to very good boxer who could go on to be very special. Martin is only 25 years old and he’s got a team around him (with Sanchez, manager Tim VanNewhouse, and promoter Tom Loeffler). He can learn from this tough experience and bounce back from it.

NO IRON MIKE IN THE ‘BEST I’VE WATCHED’?

“Best I’ve Watched” was an intriguing idea. I was surprised to see that you didn’t pick the prime Mike Tyson for anything. During those three years or so that he was at his best, I think Tyson would compete in every one of those categories, especially power and speed. – Leslie Gerber, Woodstock, NY 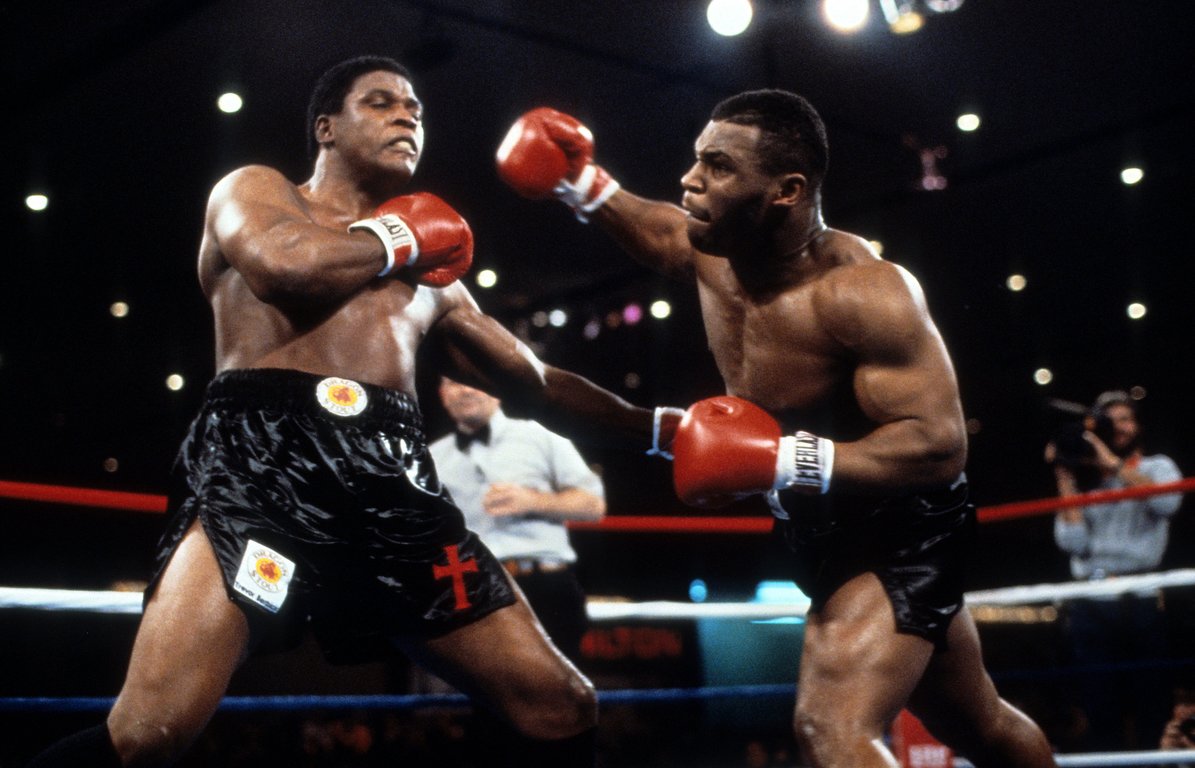 Wow. I didn’t even think about Tyson, which is weird because I was just as fascinated by Iron Mike during his prime years (1987-’89) as everybody else was in America (and probably the world). I agree that Tyson could have topped categories such as PUNCHER, FASTEST HANDS and STRONGEST, and the Brooklyn native could have at least been a runner-up in the JAB, FOOTWORK, DEFENSE and BOXING SKILLS categories.

But that goes to show you how deep and talented the boxing world was during the 1980s and early ‘90s were. Michael Spinks, Julio Cesar Chavez, Hector Camacho, Mike McCallum, Donald Curry, Meldrick Taylor, and Michael Nunn, among numerous other standouts, didn’t make my “Best I’ve Watched,” either; and cases could obviously be made for each of them in a number of categories.

I was just wondering how you would put together your perfect boxer based on any boxer you want in history. I listed my humble opinions below…

I’ll go with Lomachenko by close but unanimous decision in a highly entertaining speed-chess contest (don’t get too butt hurt, JMM fans, it’s just a matter of styles), Toney via majority or split nod in a mainly ugly bout (and it’s not the fault of Light’s Out), Monzon by close unanimous decision in a hotly contested classic, Hearns by late stoppage or unanimous decision (provided he doesn’t get too greedy and he sticks to boxing basics, which he often did at 154 pounds), and Lang by mid-rounds stoppage (provided he concentrates on Drago’s body from the onset, if not, the raging American front-runner would run out of gas and drown in the late rounds).

Hmmmm…. My perfect boxer based on any boxer I want in history… OK, here goes:

That was fun. Next time include categories for defense, ring generalship, footwork, specific combinations, and psyche warfare/intimidation.

Doug,Just a quick question that has been on my mind for a while, that I can’t find anything on.  How much further could Ali/Clay have gone if he was a body puncher?  A pinch a Jake La Motta’s DNA may have kept his loss record at 0. – Jeff, Australia

A young Cassius Clay briefly trained with Archie Moore before settling in with Angelo Dundee (who was better suited for the Olympic gold medalist’s personality and style). Moore wanted to teach Clay to plant his feet more in order to get more leverage on his shots – including body punches – but that approach to boxing would have likely detracted from Ali’s other strengths, such as his sublime defensive reflexes, lateral movement, speed and ability to punch on the fly. In order to be a top-class body puncher, Ali would have had to stay in the pocket longer than he needed to and would have given his opponents more of an opportunity to tee off on him. Who knows? Maybe a body-punching oriented Clay gets clearly outworked by Doug Jones, or perhaps he doesn’t survive his scare against Henry Cooper, as a young (still growing and developing) up-and-comer in 1963.

And later in his career, after his exile and during his quest to regain the heavyweight championship, I don’t think standing his ground and trying to dig to the bodies of Joe Frazier and Ken Norton would have prevented him from suffering his first two pro losses. Such tactics probably would have played more the strengths of his toughest rivals. Who knows? It’s all conjecture. Maybe you’re right. Maybe Ali could have figured out a way to deliver meaningful body shots without detracting from his unique (for heavyweights at the time) boxing style.