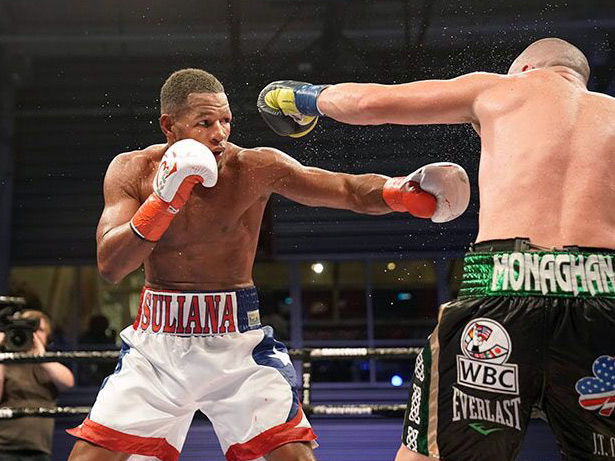 “Win or go home” is how promoter Kathy Duva described her main event featuring light heavyweights at the Aviator in Brooklyn on Saturday night, in a tango that ran on Facebook in conjunction with Golden Boy.

“Winner is most likely to get a title shot, as the division is still very hot and there are changes happening at the top,” she told The Ring before the headline bout pitting Ring-rated Sullivan Barrera against popular fringe contender Sean Monaghan started up.

My take is that no one has to go home, because both acquitted themselves honorably. After 10 rounds of structured rumbling, we went to the cards. The verdict: 98-92, 98-91, 98-91, too wide for my liking, to Barrera.

Of course, nothing is more subjective than judging boxing, but these scores don’t tell the tale of how well the Long Beach, Long Island, N.Y. pugilist performed.

Barrera said after that he thinks Seanie was strong, but he proved that he’s a tough light heavy. And Seanie proved he has zero to be ashamed about; he was right there with the Cuban, every step of the way.

Monaghan (29-2, 17 KOs) came in off a win over Evert Bravo after he took his first L against Marcus Browne. He knew entering he needed a W, or a solid showing in a loss, to not lose heavy ground at 175. Barrera wanted a rebound win after losing to Dmitriy Bivol in March; the Cuban told us he craves getting back into title shot territory and wanted to prove his worth by beating the Long Islander, who he figured would be a tough out.

In the first, we saw Monaghan pop the jab. “Keep the stick out,” yelled trainer Joe Higgins. “Keep stickin!” Sully (22-2, 14 KOs) did well to parry jabs, and Monaghan landed a left hook to end the round.

In the second, Barrera came out more peppy. He looked to push Monaghan back, but the Islander stood his ground, pumped the jab, slipped power rights and slammed a left to the body late in the round.

In round three, Monaghan landed a left hook, solid shot. Then, a right uppercut…Higgins liked his work. A sneaky right by Monaghan had the crowd and Higgins jazzed.

In the fourth, Monaghan beat Sully to the punch. Tight round; Sullivan had a better final third. To 5; Sully kept up the momentum. He bore in, his hand speed was better, his short right was angled nicely. A left uppercut for Sully had Monaghan fans feeling for him. In the sixth, we saw fighting at mid range. Barrera didn’t pull away, didn’t escalate his game to another level, Monaghan hung right there. Barrera maybe found Monaghan to be a more capable defender than he’d expected…

In the eighth, we saw both of Monaghan’s eyes a bit lumpen. He was moving smartly, more than people give him credit for being able to. Barrera’s power spoke louder later. In the ninth, we saw Monaghan being busier in the first third. He stayed nimble and agile. Then Barrera landed power; he kept the launches tight and sharp. Monaghan answered with a few uppercuts, and it was yet another tight round. In the tenth round, Monaghan pressed, and slipped adroitly. He ducked and slipped punches, how about that.

After the fight, trainer Joe Higgins told me he didn’t think they won, but thought Monaghan won four rounds.

“Da Momma’s Boy” Denis Douglin (21-6; from Brooklyn, a N.J. resident) got the W, so he didn’t have to retire. Three knockdowns, four if you count a low-ish blow, and the end came in Round 6.

He didn’t; in Round 1, DD came in firing. A counter left hit home on the Mexican, who wanted to slow the pace, clutch some, keep Douglin from getting cooking. DD showed smart body work late. In the second, DD came forward, flurried, swarmed, dug to the body, and Roman looked to clinch to get a break.

In the third, DD swarmed the Mexican, went to that body, and they were in rumble mode. DD scored a knockdown, left uppercut to the body, and Roman was up right quick. Roman had to start flurrying more, and he’d get chewed up. The Douglin left was honed in, on message. To the fourth: Roman was fading. His legs were in betrayal mode. He sat on the second rope while defending late. And bless his stubbornness; he didn’t look for a place to lay down. To the fifth: We saw Roman seek to land a quick right counter, but DD kept pressing him, getting in his face, and he scored another knockdown. A sweeping left did it, and add in fatigue. Roman wanted to keep battling. Round 6 saw DD keep up a solid pace, and Roman seek to survive. A low blow had Roman on his knees … He got extra time to recoup and they continued. DD flurried and down went Roman, again. He didn’t beat the count, thank goodness. The time: 2:53. Trainer/mom Saphya gave him a C+; he gave himself a C and said she wanted to see other things, and they will work on it in the gym shortly. Matchmaker Jolene Mizzone said she was very happy with the W. “He did what he was supposed to do, got the stoppage … Which he needed!”

In the opener, Ismael Villareal took on Travis Nero, in a bout set for four or less. Less it was. A left hook high on the head put Nero down. He got up, but was fuzzy and wobbly, and the ref said no mas. Nero came to the ring without legit boxing trunks — never a good sign. Jack Obermayor would have busted his chops. The ending came at 43 seconds into the first. The Bronx-based junior middleweight rises to 4-0. The loser goes back to Oklahoma at 1-4. 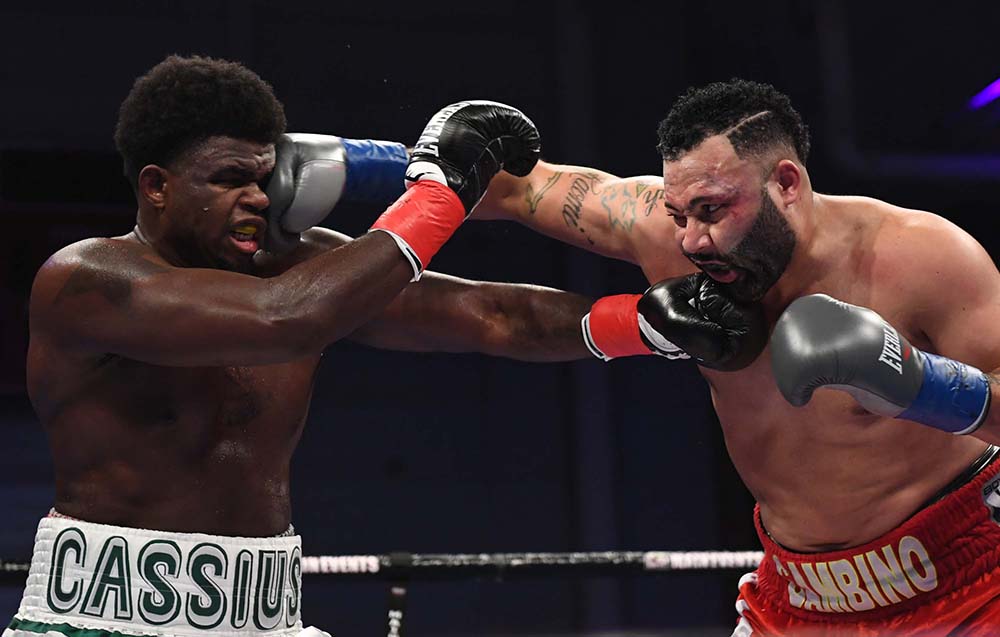 Heavyweight up-and-comer Cassius Chaney went to 14-0 as he downed Santino Turnbow, from Ohio, who slipped to 4-3. Chaney played hoops and started boxing 7.5 years ago; he lives in Connecticut and is signed to Main Events. In the first, Chaney flurried on Turnbow, who had his back to the ropes. Santino said no, you aren’t hurting me. His left eye was reddened and scratched, though. Cash went to the gut, and then lower. Turnbow got an extra few seconds of breathing room. He ate shots, had the high guard, mostly defended to end the round. In the second, down went Chaney. A booming left did it. He got up, fought on, and roared back. They butted heads to cap the wild second.  “Promising young fighter. Have to see what he’s made of now,” said promoter Kathy Duva after the second. In the third, Santino looked to fire snappy counters, potshot. But Cassius regained contrl of the scrap. In the fourth, Cassius backed Santino up, and sent the loser down. He didn’t beat the count. A jab blinded him and then a long right buzzed him badly. The time: 1:04, in the fourth. By the way, Chaney on the Talkbox podcast thought the worm would turn around round four, or so. Prescient dude. He got his eighth stop. After, Duva said she was happy. “He’s recovered nicely!”

NOTES: Matchmaker Jolene Mizzone looked on the bright side and said she was happy we’d get a better night’s sleep, with just four bouts. Three fell out; one late—LeShawn Rodriguez hurt his right hand and was a late scratch.

—AK of DAZN’s AK and BARAK was in press row, watching the bouts.

—RING 8 boss Jack Hirsch announced the RING 8 (N.Y.) Holiday Gala—it’s Sunday, Dec. 9. TBA is Fighter of the Year—I’m guessing Terence Carwford gets the nod. Riddick Bowe will receive the Legends Award, and Jarrell “Big Baby” Miller will get N.Y. State Fighter of the Year. Message me for tix info.