Ryan Martin: ‘I’m not worried about what Josh Taylor brings’ 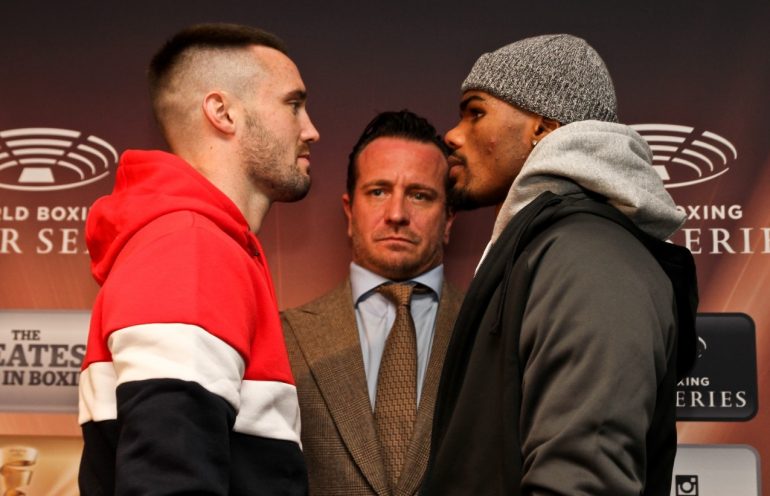 Glasgow, SCOTLAND – An incursion into enemy territory is always going to be difficult, but Ryan Martin couldn’t be any more relaxed.

In a battle of unbeatens, the fighter known as “Blue Chip” will square off against highly-touted Scotsman Josh Taylor at the SSE Hydro in Glasgow on Saturday. The bout will be the last quarter-final of the World Boxing Super Series junior welterweight tournament, with the winner facing newly-minted IBF titleholder Ivan Baranchyk in early-2019.

Martin (22-0, 12 knockouts) has been a professional for five years, but outside of a quick blowout of the undistinguished Miguel Soto in Puerto Rico, all his bouts have been fought on U.S. soil. However, the visitor has been taking things in his stride and does not appear one bit fazed by the prospect of squaring off against The Ring’s No. 2 rated 140-pounder.

“Everything has been good so far in Glasgow,” said Martin in an interview with The Ring. “The weather’s been cold, but I’ve just been preparing with my coach (Abel Sanchez), losing the last few pounds and getting ready for fight night.

“The timing on the World Boxing Super Series has been perfect for me. When the opportunity presented itself, I jumped right on it. I told Abel and my team that I wanted to go in the tournament. I wanted the big fights, the big stage, and this is where it’s at. This is what every fighter wants, and I’m glad to be here.”

However, no matter how happy Martin may be, his chances of progression in the tournament are minimal according to the oddsmakers. The 25-year old boxer-puncher is no better than a 6-1 underdog in a two-horse race, which, in betting parlance, suggests that Taylor merely has to show up.

The Scotsman has been on excellent form over the last 18 months, with his fiery blend of hand speed, quick feet and punching power resonating on both sides of the Atlantic.

“But that’s my abilities too,” argued Martin, who moved up from lightweight at the beginning of the year. “I’ve got good feet, I’ve got good handspeed, and I just need to be right when I get in there.

“I’ve been perfecting my craft and that’s all I’ve worked on in this camp. I’ve had a good look at Taylor and he’s a good boxer, but I just have to be on my A-game and do what I do best. I’m not worried about what Josh Taylor brings. I just need to worry about what I’m gonna do fight night.”

Martin wears the look of a man who knows something most don’t. He was a decorated amateur star who has rarely been tested as a professional, although he was deemed very fortunate by some in a 10-round split decision win over Francisco Rojas last September.

However, regardless of that close shave, Martin’s confidence was superseded by that of his acclaimed coach.

“At this point, Ryan is the best fighter Josh has faced,” said Sanchez, who put Martin through his paces at The Summit gym in Big Bear, California. “It’s going to be very difficult for Josh on Saturday night. He’ll have the crowd on his side because we’re in Scotland, but he’s gonna have to deal with Ryan Martin’s desire to not only win the tournament, but to get to the next level.

“Josh Taylor is very talented but with just 13 fights, he really hasn’t fought anybody who has given him a difficult time in the later rounds. Sometimes there are fighters like (Vasyl) Lomachenko and (Aleksandr) Usyk who can deal with that early in their careers. We’ll see if this young man can.”

When I pointed out that Taylor’s most recent victory was a 12-round unanimous decision over former WBC junior welterweight titleholder Viktor Postol, Sanchez was quick to dismiss the comparison.

“(Taylor) fought Postol, he didn’t fight Ryan Martin,” said the trainer abruptly. “He fought a guy who couldn’t punch, who was inactive, and what’s more, he fought a guy who didn’t really give him anything to think about. It’s easy to hit a heavybag. Postol was a good champion, not a great champion, and his inactivity, lack of power and lack of hunger was the difference in that fight.”

The Martin camp is extremely confident. Can “Blue Chip” take things to the next level, or will “The Tartan Tornado” blow him away?