Claressa Shields isn’t interested in being a well-behaved lady 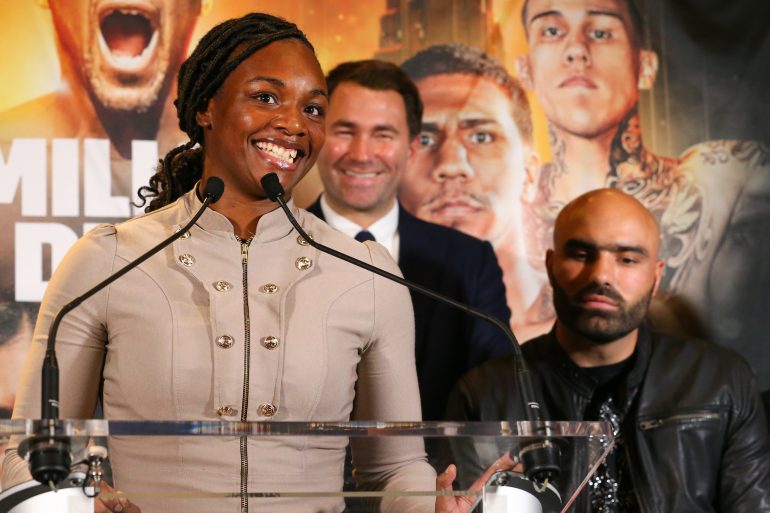 NEW YORK – Claressa Shields says she knew something was up in late-September.

That’s when Shields, participating in a conference call with Christina Hammer, started questioning whether Hammer would make it to the ring for their much-awaited women’s middleweight title unification bout. A week later, Hammer withdrew with an undisclosed medical condition, putting Shields’ best chance at proving her greatness as a professional on hold for the foreseeable future.

“I kind of felt in her tone when she was talking…I was thinking to myself ‘something’s wrong. She’s not as excited as I am about this fight,’” said Shields (6-0, 2 knockouts).

“She had the mouthpiece that said ‘Fuck Shields’ but she didn’t really come have that attitude over the phone.”

Hammer’s announcement nearly came too late, forcing organizers to scramble to find an alternate opponent for Shields to keep her November 17 date. Instead Shields will fight Hannah Rankin, a seven-fight pro from Scotland coming off a loss to Alicia Napoleon in her first world title fight in August. Now Rankin get a chance to fight for the IBF and WBA female middleweight titles that Shields holds, plus the WBC belt that Hammer vacated due to her illness.

“She’s Christina Hammer’s top sparring partner; I’m gonna make her pay for that,” said Shields, 23, before hinting at an appreciation for Rankin turning down another fight to fill the vacancy at the Kansas Star Arena in Mulvane, Kansas, the co-featured bout to a card which will be broadcasted by DAZN.

Shields had left her belts at home but carried her two gold medals from the London and Rio de Janeiro Olympics in a small backpack. What she didn’t forget to bring to the press conference Saturday evening at Madison Square Garden was her confidence, which she exudes more naturally than any female boxer since Laila Ali. A more recent comparison would be to fellow Michigander Floyd Mayweather Jr., using her pedigree and resume’ to draw attention to the events she’s fighting on.

Upon taking to the podium she corrected promoter Eddie Hearn, who had referred to her as an Olympic gold medalist. “I’m a two-time gold medalist, the only one from the U.S.,” said Shields, eliciting a chuckle and a woo from the Matchroom Boxing boss.

“I hope you work on your head movement because I’ve got a hell of an uppercut and it might put you down,” Shields said, turning her attention to Rankin.

“I’m the greatest woman of all-time. There’s a lot of men that can’t beat me,” Shields stated matter of factly from the podium, leaving the mostly male media contingent in attendance struggling to take stock of what they’d just heard.

“I can’t beat her,” Jarrell Miller, the undefeated heavyweight who is nearly twice her size, joked from his main event position on the dais.

Rankin, who pays her bills as a classically-trained bassoonist in her new home base of London, says trash talking isn’t her style. She believes the Napoleon fight taught her much about the sport, helping her make up for having virtually no experience as an amateur, and warned that Shields “better be ready for me.”

One claim Rankin did push back on was Shields’ insistence that she is the greatest female boxer of all-time.

“I don’t agree with that,” said the 28-year-old Rankin (5-2, 1 KO), naming Ali as one fighter who came to mind. “These people have been pioneers for women’s boxing so I don’t think you can give yourself that title just yet.”

Shields makes no apologies for her demeanor, just as you wouldn’t expect a male fighter to. She points out that there is a double standard in how men traditionally have behaved to sell fights, while women are still expected to behave like ladies before and after bouts. Behaving lady-like hasn’t yet bridged the pay or television exposure gap, she figures.

“All the women that came before me, they never broke the double standard. They kind of left it the same. Soon as someone said ‘all women shouldn’t talk like that,’ they toned it down. I’m not gonna do that. Nobody’s gonna make me tone it down,” said Shields, who reminds that her post-fight altercation with Hammer following their twin-bill showcase on a June Showtime card in Detroit generated significant views on social media.

“I should have slapped her,” said Shields.

Hearn, who is essentially in hurry-up offense to try and sell tickets in three weeks after the venue moved from Atlantic City, seemed to appreciate Shields’ effort at the podium to boost the card. Hearn’s position on women’s boxing has evolved since becoming acquainted with unbeaten Irish star Katie Taylor, and now says he wants to put a women’s title fight on each of Matchroom’s cards. 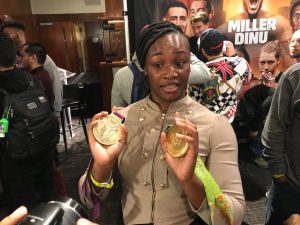 With few notable challenges for Shields to face to prove she’s as good as she says she is, she’s left looking both up and down the scale for meaningful opponents. Shields had already won the unified super middleweight title in her fourth pro fight and insists the fighters at the 168-pound limit are not interested in facing her despite offering the best purses. She called out Napoleon, predicting she’d stop the Long Islander in four rounds if they met, and accused Maricela Cornejo and Raquel Miller of turning down fights with her. (Miller claims she was offered a four-round bout for a purse “far below the market value for a world medalist.”)

Shields says she’d be willing to drop to 154 to meet current undisputed welterweight champion Cecilia Braekhus (34-0, 9 KOs), who became The Ring’s first ever pound-for-pound champion after breaking the gender barrier on HBO this past May in her fight against Kali Reis.

“I don’t want to go to 147, she can keep her belts. I want the pound-for-pound spot. After I beat her she can be number two, I’ll have the number one spot,” said Shields.

Shields at once projects an aura of geniality and menace, waving hello to the audience before proclaiming that she’s not a nice person once she’s inside the ring. She says outside the ring she loves people – “it’s like a blessing and a curse at the same time” – but fighting is what truly makes her happy.

As Shields and Rankin stared face-to-face for photo opportunities, their mean mugs turned to smiles, almost uncontrollably at the absurdity of boxing pageantry and promotion. Then it was back to social media for Shields to take aim at all potential rivals, feuding simultaneously with everyone and anyone around her weight using language that’d make Stone Cold Steve Austin blush.