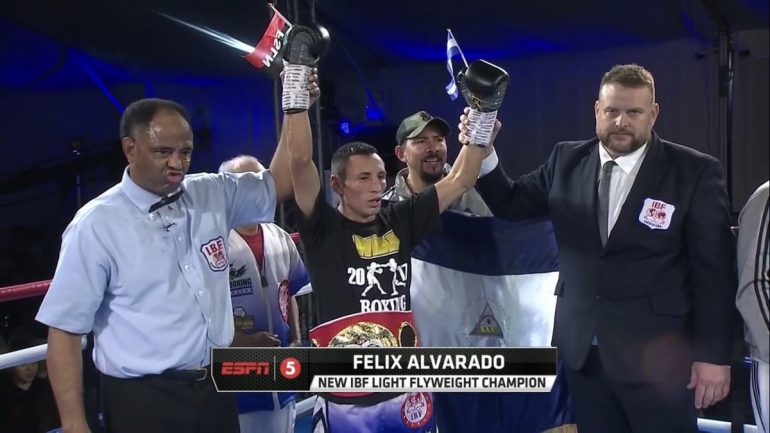 The Nicaraguan brawler Alvarado (34-2, 30 knockouts) never stopped punching, even as Petalcorin (29-3-1, 22 KOs) landed sharper, shorter counterpunches off the ropes. Petalcorin’s game plan seemed to be to allow Alvarado tire out as he threw punches at a seemingly unrealistic pace, but that slowdown never happened.

The first knockdown came early in the seventh round when a left hook to the body sent him to a knee on a delayed reaction. A second knockdown came moments later, and after one final attempt at a miracle turnaround Petalcorin was sent back down to a knee and shook his head before rising just as the count expired. The time of stoppage was 2:04.

Alvarado, 29, of Managua, Nicaragua had fallen short in fights against Kazuto Ioka and Juan Carlos Reveco in attempts at the WBA junior flyweight and flyweight titles, but has now won 16 straight in his march to champion status.

Alvarado entered the fight rated no. 5 by The Ring at 108 pounds while Petalcorin is unrated. The belt was vacated by Ring champion Hekkie Budler after he defeated Ryoichi Taguchi for the unified title.

The Alvarado-Petalcorin and Magramo-Kokietgym fights were televised in the U.S. on ESPN+ and on ESPN 5 in the Philippines.