Welcome to The Daniel Jacobs Show 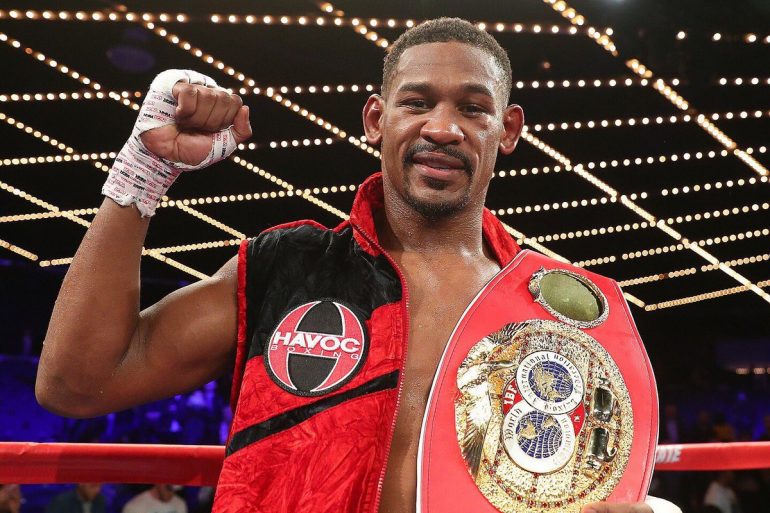 NEW YORK – Some will say that this is the first time Danny Jacobs has ever been world champion. The 31-year-old from Brownsville, Brooklyn had previously held a secondary version of the WBA’s middleweight title, but there was nothing in dispute about his status as IBF champion as he sat in the 200 section of The Theater at Madison Square Garden, about an hour after he had his hand raised in victory against long-time sparring partner turned number one contender Sergiy Derevyanchenko on Saturday night.

He’s come a long way in seven years, when his budding career was put on hold indefinitely by osteosarcoma, a rare bone cancer that wrapped around his spine and left him in a wheelchair, paralyzed from the waist down. Even in the afterglow of his highest victory, a perspective shone through that can only come with having nearly lost everything.

“This is just,” Jacobs said as he tapped the red leather belt resting on his lap, “material stuff.

“My outlook on life is totally different because my life was almost taken. So the fact that I can live every day, breathe every day, and be around my loved ones and see the sun shine, see my family, it’s priceless.”

Having gone from chemo to champion, Jacobs wasn’t as interested in musing about what network he’ll jump to now that HBO is getting out of the boxing business at the end of this year, or whom he’ll next challenge in his broadcast rights-rich division, other than to bask in the fact that he now occupies prime real estate there.

Sparring 300-plus rounds with Derevyanchenko turned out to be pretty good practice for Jacobs (35-2, 29 knockouts) once the headgear came off. Jacobs scored a knockdown on an overhand right hand along the ropes near the end of the first round, and was able to tire out the Ukrainian tough man with digging body shots throughout the bout. Jacobs voiced his surprise that one of the three judges scored the bout 114-113 in favor of Derevyanchenko, but took comfort in the other two judges scoring it 115-112 in his favor.

“I knew that he had his angles that he tried to implement inside the ring, and I was able to take advantage of that. And I know also from sparring him that he gets tired once he misses,” said Jacobs, as he was flanked by promoter Eddie Hearn, manager Keith Connolly and trainer Andre Rozier.

Did he have any reservations about tearing into someone he had shared a gym with? None whatsoever. He wishes he had more time in the first round to finish him off.

“Afterwards I felt some type of way, but not enough to let it affect me inside that ring…But as far as emotions inside that ring to deter me from wanting to take his head off, that wasn’t there.”

Hearn had signed Jacobs after he opened people’s eyes with his close fight against Gennady Golovkin 19 months ago – his first serious in-road into what became Matchroom Boxing’s American campaign – and guided him to two straight wins over unbeaten fighters before the Derevyanchenko fight.

He thanked HBO for making Jacobs’ championship dream come true. Then, putting on his promoter’s hat, Hearn let it be known that he’d prefer to see Jacobs get a big money fight against RING middleweight champion Canelo Alvarez, arguably the sport’s biggest draw and the first major name to land on Hearn’s DAZN platform following news of HBO’s exodus from the sport.

Alvarez, who took a draw and a close points win in two fights with Golovkin, will have his first fight of an 11-fight deal with DAZN on December 15 against super middleweight Rocky Fielding. That would give Jacobs and Alvarez enough time to prepare for a Cinco de Mayo fight date, Hearn figures.

“I would love him to get the Canelo fight. It’s a fight we nearly got in May, and now…he’s a champion now, he gets to call the shots. If he wants a defense, he gets a defense but at this stage of his career I think a Canelo fight is the fight,” said Hearn.

“That is a fight I would love to see: Danny Jacobs’ name up in lights in Vegas, fighting Canelo. And I believe he can beat him.”

There’s also Golovkin, a matter that Rozier describes as “unfinished business”. Jacobs says he understands why he didn’t get a rematch – he says he wouldn’t have given himself a rematch if he was Golovkin. But now that Jacobs has a belt, he says he isn’t waiting by his phone for a rematch.

“That’s exactly why on the broadcast I said that I would give him the rematch, because I’m the champ now,” said Jacobs.

“Now there’s almost nowhere for him to go, and from what I’m hearing if he doesn’t sign with DAZN he’s not gonna get any of those big fights that he truly wants.”

Another notable middleweight under the Matchroom banner is Demetrius Andrade, the unbeaten Rhode Islander who lifted the vacant WBO title last week with a win over late replacement Walter Kautondokwa. Jacobs says his bond with Andrade, a personal friend from their amateur days as teenagers, runs deeper than his bond with “associates” Peter Quillin and Derevyanchenko. But the fight could happen, if the money and demand are there.

“We came up the amateurs together, his father is like an uncle to me. This is way more personal than everything, but we also love the sport of boxing and we also want to do it for the sport of boxing so we have plans of facing each other. But hopefully for the future, not the near future.”

New-IBF middleweight champ @DanielJacobsTKO says he spoke with WBO middleweight champ and close friend @BooBooAndrade about a future fight, says they’d only do it for unification with big bucks at stake #boxing #JacobsDerevyanchenko pic.twitter.com/N4cITBNZJ3

And what about Jermall Charlo, the PBC-aligned fighter Jacobs confronted in the back hallway of the Barclays Center earlier this year?  Hearn joked that he’d offer Charlo a 90-10 split, but Jacobs was more accommodating.

For years, Jacobs had heard he was more risk than reward, a backhanded way of saying he wasn’t worth the time from the big names in his division. With a belt around his waist and an omnipresent smile upon his face, Jacobs has flipped that “reward” balance and has something to entice those same fighters into the ring with him.