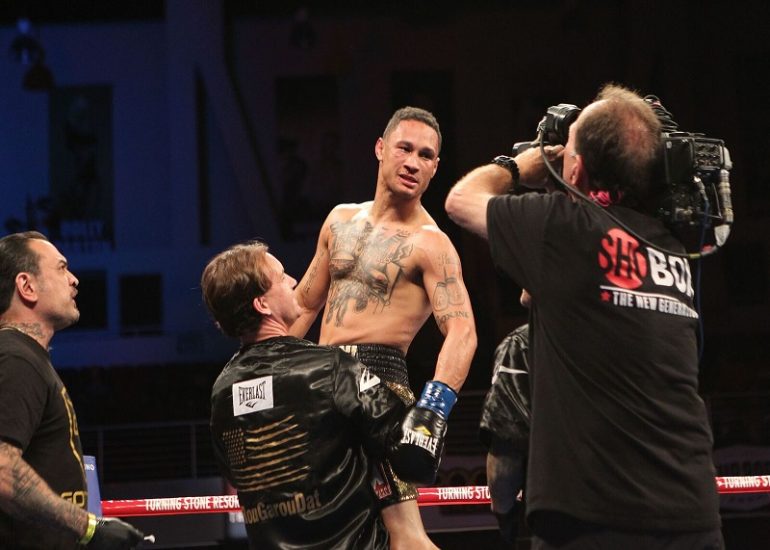 Photo by Tom Casino/Showtime
27
Oct
by The Ring

One semi-final of the junior welterweight World Boxing Super Series tournament has been confirmed, and it should be explosive.

Regis Prograis will face the formidable WBA titleholder Kiryl Relikh in early-2019 after winning a 12-round unanimous decision over England’s Terry Flanagan at the Lake Front Arena in New Orleans, Louisiana, on Saturday.

Prograis, who is rated No. 1 by The Ring at 140 pounds, dropped the former WBO titleholder with a solid counter left in the eighth, hurting him badly. The writing was on the wall, but Flanagan, as he did throughout the fight, battled back gamely and managed to see the final bell in this all-southpaw matchup.

“Most people say I only got power. Now, I showed you, I can go 12 rounds with a world-class fighter,” said Prograis (23-0, 19 knockouts) who was fighting in his home city.

“It don’t matter who the hell I fight, I’m going to win the whole (tournament). The Muhamad Ali trophy is mine.”

Flanagan, who had never been off his feet in a 10-year professional career, drops to 33-2 (13 KOs). Prograis, who had never gone 12 rounds in his career, rubberstamped his status as one of the finest junior welterweights in the world with a convincing and punishing display.

The Russian power-puncher, who is rated No. 8 by The Ring, stalked the previously unbeaten Yigit from the opening bell and inflicted plenty of damage on his southpaw opponent.

Yigit, who likes to enjoy time and distance during fights, had no choice but to fire back at Baranchyk and he did just that, landing several quality shots of his own.

However, an acute swelling around Yigit’s right eye got progressively worse with each passing round, and by the time of the stoppage, the damage was not for the squeamish. Initial protests were quelled when Yigit saw the extent of his injury.

Baranchyk (19-0, 12 KOs) will face the winner between Scotland’s Josh Taylor and American Ryan Martin, who collide in Glasgow, Scotland, next Saturday. Yigit drops to 21-1-1 (7 KOs).