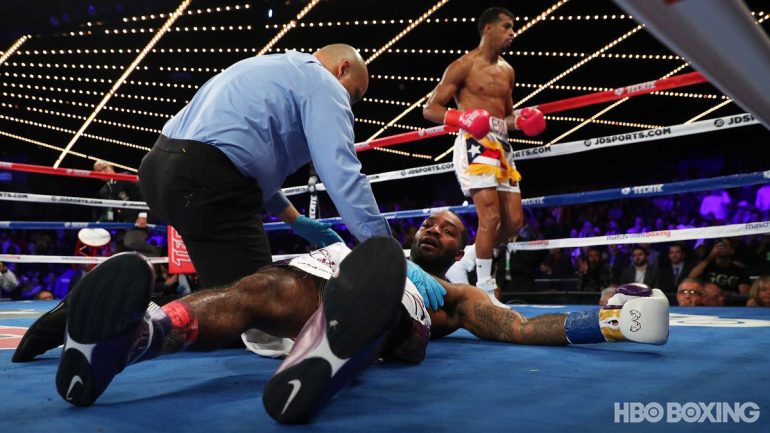 Alberto Machado's title was marginalized by the WBA's decision to elevate Gervonta Davis, but the Puerto Rican remained undefeated with a knockout of Yuandale Evans in October. (Photo: Twitter @HBOboxing)
27
Oct
by Joseph Santoliquito

NEW YORK — It seemed each time you blinked, you missed another knockdown. Alberto Machado not only towered over 5-foot-6 Yuandale Evans in height, but also in power and precision punches while making easy work of the Cleveland native.

Machado, owner of the “regular” WBA junior lightweight title, slammed Evans down three times before referee Ricky Gonzalez mercifully waved it over at 2:25 of the first round Saturday night at the Hulu Theater at Madison Square Garden.

The only drama came ringside when Lou DiBella vociferously berated the New York State Commission for not stopping the fight sooner.

“Right from the start, I knew he couldn’t hurt me,” said Machado. “I was very confident and all my punches were working.”

Machado’s nickname is “El Explosivo,” and he was. At 5-foot-10, with a reach that seemed to stretch halfway across the ring, Machado (21-0, 17 knockouts) worked wonderfully behind his jab. It set up the first knockdown, which was produced by a blunt, straight left to Evans’ jaw.

“His nickname is “Money Shot” for a reason.” — Roy Jones Jr. on @xplosivomachado pic.twitter.com/dbQuTOpkgm

Evans got up, but it was evident he wasn’t right.

Machado took his time and slowly stalked Evans, garnering the second knockdown off of a barrage of punches. The argument could be made that Gonzalez could have stopped the fight then, but Machado put the exclamation point on it with a picturesque right hook to the chin.

Gonzalez didn’t wait for Evans’ body to touch the canvas before waving it over.

Machado credited his telephone-pole jab and the work he did with Hall of Fame trainer Freddie Roach in making a more powerful weapon.

“Freddie and I work on so many things in camp and I’m learning every day, getting better every day,” Machado said. “My jab sets up my power shots and I just let my power shots go, especially once my opponent is hurt like tonight.

“I want all the big fights. I will fight anyone and want to fight again very soon.”

Whoever Machado, 28, takes on next, they’re going to have their problems. He’s long, powerful and knows how to use his height and distance. Gervonta Davis holds the WBA 130-pound title, but he’s currently dealing with legal complications from being arrested in September after an altercation in Washington, D.C., charged with misdemeanor simple assault, according to D.C. police.

Seated ringside and now part of the Matchroom Promotion banner, which also has Machado, was Philadelphia southpaw Tevin Farmer, the IBF junior lightweight titleholder who will be back at Madison Square Garden fighting on the Canelo Alvarez-Rocky Fielding undercard on December 15.

An opponent has yet to be named for Farmer. Machado barely broke a sweat.