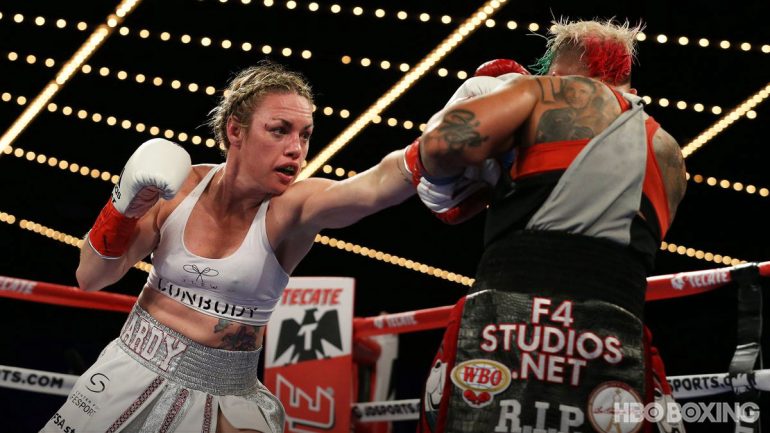 NEW YORK — Her eyes were dark slits, and it seemed Heather Hardy could barely see out of them. But the 36-year-old from Brooklyn, New York, was able to see enough of Shelly Vincent to punch her and claim the vacant WBO female featherweight world championship Saturday night at the Hulu Theater at Madison Square Garden.

Hardy (22-0, 4 knockouts) won a 10-round unanimous decision on the scorecards of judges Glenn Feldman and Kevin Morgan, who each had it 97-93, while judge Alan Rubenstein scored it 99-91 for Hardy.

The two couldn’t have been more contrasting. Vincent was so colorful with her blonde Mohawk haircut, while Hardy looked as if she walked out of a board room, wearing glasses and decked out in all white.

In the first round, Hardy and Vincent certainly went after each other. They burrowed into each other, with Vincent making more contact and Hardy flashing a smile as if to say, “Whatever you throw at me won’t hurt me.” But the round appeared to be Vincent’s based on activity and accuracy.

Vincent went tumbling back at Hardy in the second, like an uncontrollable wind-up toy soldier, bouncing back and forth. But Hardy’s superior skills began to surface. She pecked away through Vincent’s high guard and landed scoring, though not impactful, blows.

In the third, Vincent swung away, hitting nothing but air. Each time Hardy threw, she landed, though she threw with less emphasis on the right uppercut she’d tried to connect with in the opening two rounds.

By the fourth, Hardy appeared to find her rhythm and distance against the constantly charging, constantly bobbing-and-weaving Vincent, whose left hook did cause Hardy some trouble. There was also a sense that Vincent was beginning to tire. Her high, around-the-face guard wasn’t up as often. In fact, there were times in the fourth when Vincent’s hands were down by her waist.

The two fighters has a great exchange against the ropes at the outset of the fifth. Hardy may have had the edge with her body attack.

In the sixth, Hardy’s right eye was swelling, no doubt from Vincent’s accurate left hook. It was a good round for Vincent, who climbed back into the fight with the competitive two minutes.

With fatigue setting in, the pace of the both fighters slowed in the seventh. A gaping cut opened over Hardy’s left eye, which referee Harvey Dock correctly determined was caused by a head-butt.

Possibly feeling urgency due to the damage around her eyes, Hardy exhibited better footwork and sharper punching skills in the eighth. She moved out of the way and stopped the head-first Vincent in her tracks a few times with her jab.

In the ninth, Hardy showed off her defensive skills, dancing through Vincent’s attacks while constantly landing her jab, mixed in with an occasional body shot.

Vincent stalked Hardy in the 10th, but Hardy, using distance and her accurate punching, landed a right uppercut and again scored to the body. Hardy’s top, which began the fight as white, now had a pinkish hue.

But there was no doubt for “The Heat” this time.

“I absolutely won, no doubt about,” Hardy said before the scores were read. “This time my technique was so much better, she wasn’t able to just run in to me and attack. I moved, gave her angles. My jab was so much better, I felt in control the whole fight.

“I was in much better shape for this fight, our camp was longer and we were able to work on so much more. Thanks to everyone on my team, it’s an unbelievable feeling to be a world champion.”