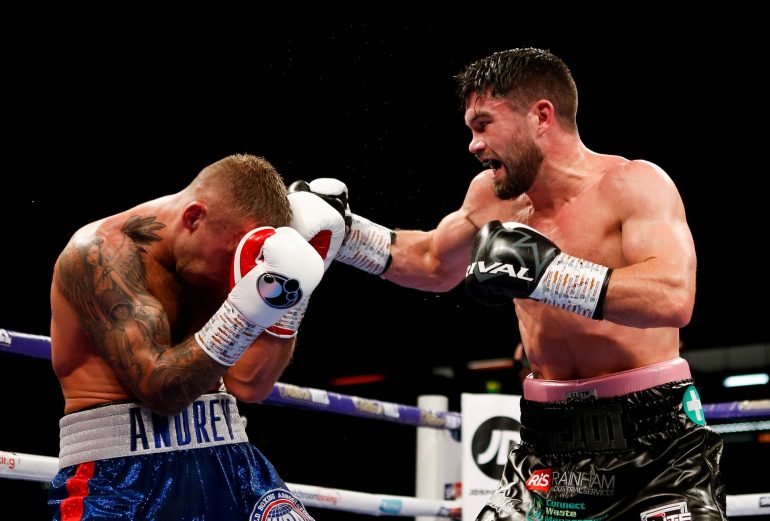 In an all southpaw battle, British super middleweight John Ryder scored a seventh-round knockout over unbeaten Russian Andrey Sirotkin at the Copper Box Arena in London. The official time was 2:54.

After a competitive first half, Ryder (27-4, 15 knockouts) sensed his moment at the perfect time. Sirotkin had initially proved troublesome, but his engine let him down suddenly and Ryder began to close the gap with abandon. A quick right hook to the body decked the visitor in the seventh and that was all she wrote.

Sirotkin (15-1, 4 KOs) surprisingly started off in the orthodox stance at the opening bell and remained in that posture for the first four rounds. Neither fighter did much in the way of damage, but Sirotkin’s single shots from the outside carried the day in the early sessions.

However, Ryder came to life in the sixth and broke through with some heavy power shots on the inside which clearly had an effect. A solid right uppercut snapped Sirotkin’s head back and the Russian technician immediately looked discouraged under fire. A nasty cut over Ryder’s left eye didn’t look good, but the home fighter was now on the ascendancy.

The body shot finish was sudden and impressive.

Since dropping a split decision to countryman Rocky Fielding in April 2017, Ryder has been on a good run of form. Prior to tonight’s victory, the Londoner scored impressive knockout victories over Patrick Nielsen and Jamie Cox and, with this bout being sanctioned as a final eliminator, he is now poised for a WBA title shot.