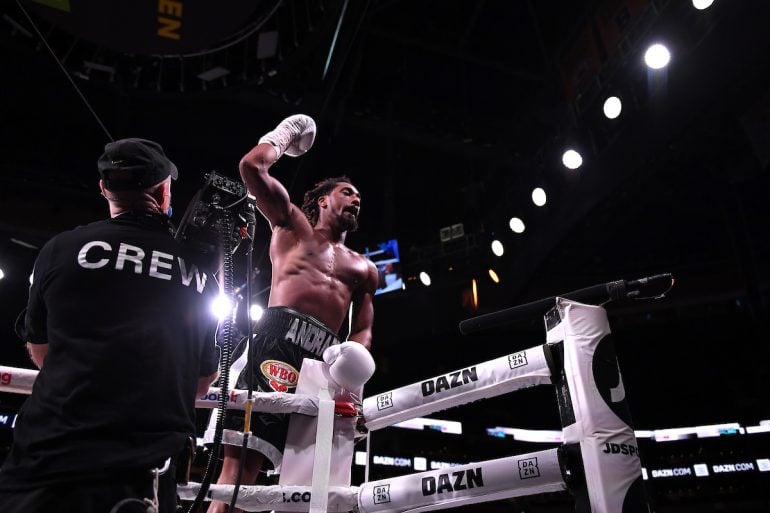 Billy Joe Saunders never made it to the fight, but Demetrius Andrade did, and he can now call himself a two-division titleholder.

Walter Kautondokwa replaced Saunders on 10 days’ notice after the Brit tested positive for a banned substance, and he was no match for Andrade in his first fight outside Africa. “Boo Boo” scored four knockdowns en route to a unanimous decision victory to claim the vacant WBO middleweight tight on Saturday in Boston.

“I definitely think I carried my power well,” said Andrade, a former 154-pound titleholder who was fighting at 160 pounds for the second time. “We’ll keep building and growing for the middleweight division.

“He kept coming forward, didn’t show any weakness. He was getting stronger as the fight was going on.”

Andrade (26-0, 16 knockouts) produced a knockdown in the opening frame with a grazing overhand left before Kautondokwa appeared to trip over tangled feet. With the Namibian’s left forearm resting on the canvas, Andrade delivered another left hand, but referee Steve Willis didn’t warn him and instead began his count.

Kautondokwa (17-1, 16 KOs) was far larger in the ring, and he proved to be durable, but the 33-year-old presented little adversity for Andrade. The Olympian created another knockdown in Round 3, and two more in Round 4 with picture-perfect overhand lefts. Willis, regarded as one of the best officials in boxing, missed another call when Andrade’s glove touched the canvas during an exchange that led to the third knockdown of the bout. Really, it was an ultra-rare double-knockdown.

Saunders presented the sort of elite opponent Andrade has long craved to match wits with in the ring, and it was a highly intriguing fight on paper. Unfortunately for Andrade, 30, he was forced to fight an unheralded foe who will do little to raise his stock as a fighter.

What The Ring’s No. 8 middleweight now has is a title, a valuable commodity that should land him that ever-elusive marquee bout next year. Andrade told The Ring that he badly wants a crack at Canelo Alvarez, a viable matchup now that both boxers ply their craft exclusively on DAZN.

There’s also Saunders, who Andrade said he’s still willing to fight once the dust settles. Saunders is facing a suspension, and he vacated his middleweight title after the bout with Andrade was scrapped.

Promotional issues and the inactivity that accompanied it have long plagued Andrade. Now, he’s a titleholder once again, and this time, he has plenty of stability around him.