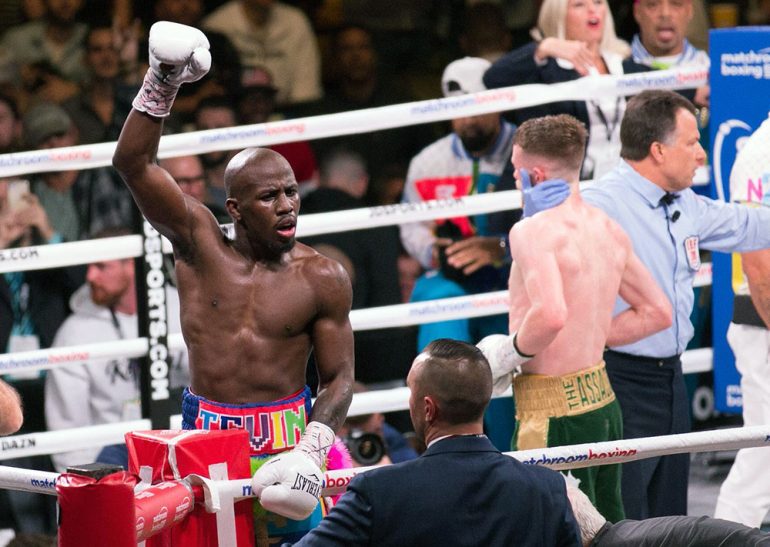 Tevin Farmer’s first title defense came against weak opposition, but the Philadelphian made sure his performance stood out.

The 28-year-old boxed beautifully with plenty of shots delivered with precision to the head, but it was the body work that earned Farmer an elusive knockout.

The southpaw retained his 130-pound belt with a fifth-round stoppage of James Tennyson on Saturday in Boston on a card streamed by DAZN. Farmer dropped the Brit with a vicious left hook to the midsection in Round 4, dropping Tennyson to all fours, and the same shot produced the same result the following round as referee Arthur Mercante Jr. halted the contest at 1:44.

It was Farmer’s first knockout victory in his last eight bouts (2015 KO of Daulis Prescott). Now, Farmer (27-4-1, 6 knockouts) wants a crack at unification.

Farmer is The Ring’s No. 4 junior lightweight, and he’s improving every fight. He picked up the title with a wide-points victory over Billy Dib in August, and he shows no signs of slowing down. Tennyson (22-3, 18 KOs) presented no challenge, but if Farmer’s wish is granted, he’ll soon be tested.

“I’m the best fighter in the world,” Farmer boasted. “I haven’t proven it yet but watch. I’ve been learning in the on job, I’m just starting to adapt now. I had to get all my experience through the pros.”