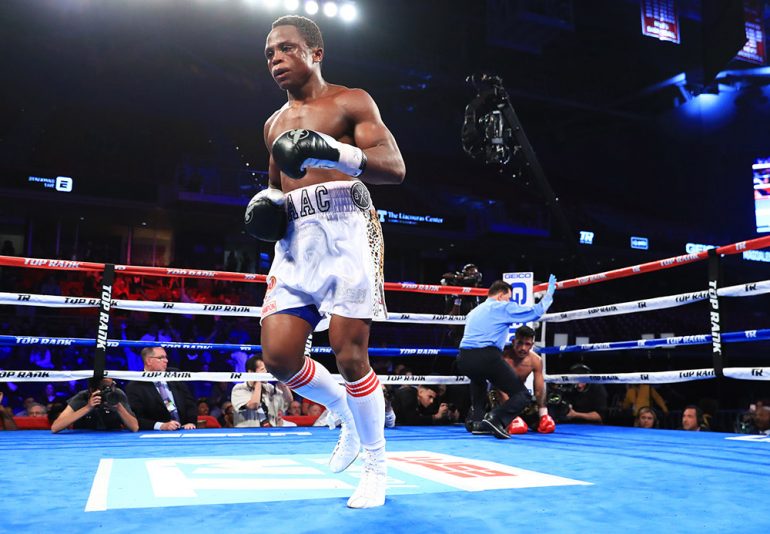 Top Rank is keeping the momentum going with one of its best young talents.

The first fight of Isaac Dogboe’s new multi-fight deal with Top Rank is set for December 8 in New York. He’ll defend his junior featherweight title against Emanuel Navarrete in the ESPN co-feature to Vasiliy Lomachenko-Jose Pedraza, the promotional outfit announced.

Dogboe (20-0, 14 knockouts) is The Ring’s No. 1-rated fighter at 122 pounds, and he’s also regarded as the division’s most reliable action fighter. His 11th-round KO of Jessie Magdaleno in April was a breakthrough performance for the Ghana native. He showed off his fearsome power once more with a first-round TKO of Hidenori Otake in August.

“Put me among the best, and you’ll see the best of Isaac ‘Royal Storm’ Dogboe,” said the 24-year-old. “We love the New York crowd. That’s what will motivate us and make us fight harder. Madison Square Garden is a legendary place.

“It’s a place where many fighters were made. Lomachenko and Pedraza are great fighters and being featured on a show with other great fighters is an honor. We are ready to roll. And to my fans, trust me, the ‘Royal Storm’ is coming to entertain!”

Navarrete (25-1, 22 KOs) is rated No. 9 by The Ring at junior featherweight, a viable challenger to Dogboe’s title. The hard-hitting Mexican has scored eight consecutive knockouts over limited opposition, but now he’s stepping way up in class.

“This is the opportunity I was waiting for. I have a lot of respect for Isaac Dogboe, but this title will be mine,” said Navarrete, 23. “I feel very happy and motivated by this opportunity, even more, because of fighting in New York City. I know that from Dec. 8 forward, the name Emanuel Navarrete will be known all around the world. I’m sure this win will be mine.”