Josh Taylor: ‘I can outbox Ryan Martin and I can outfight him’ 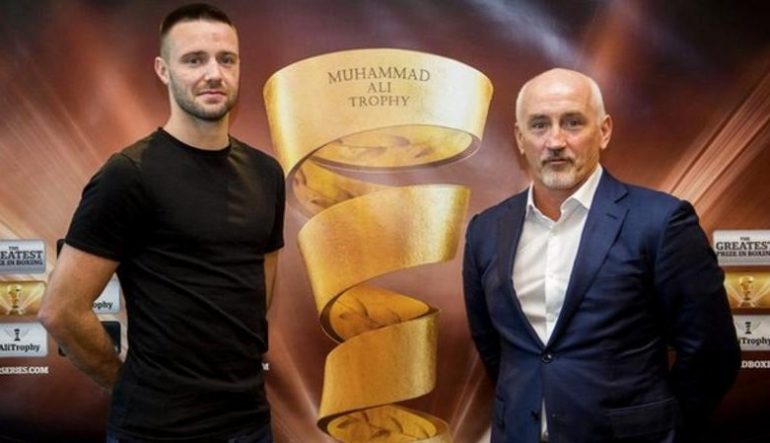 The World Boxing Super Series brigade arrived at The Hilton on Monday to give the Edinburgh man’s Nov. 3 clash with Ryan Martin a promotional boost but, in reality, the fight doesn’t require any hype. Both men were high-quality amateurs, both are unbeaten as professionals, and both possess skillsets of the highest caliber.

Taylor, who is rated No. 2 by The Ring at 140 pounds, is coming off an impressive victory over Viktor Postol in June. The quick-fisted Scotsman floored the former WBC junior welterweight champion en route to a 12-round unanimous decision, however, he was forced to dig deep for the first time in his paid career.

“I think that was the perfect time to have an acid test,” said Taylor in an interview with The Ring. “All the fighters in this tournament are top fighters, so it’s possible I’ll get tested like that again. I learned a lot about myself in the Postol fight and I ticked a lot of boxes. There were things I thought I knew about myself but now I know for sure.

“In this tournament, you’ll see a more fluent Josh Taylor. I’ll be more relaxed and more disciplined against Ryan Martin, and you’ll see a better boxing performance. I had a bit of an off-night against Postol, but I’ll be more explosive, crisper and sharper than I was in that fight.”

There was a lot on the line for Taylor in the Postol bout. It was the 27-year-old switch hitter’s first excursion into world-level territory, he was fighting to retain a mandatory position with the WBC, and he knew a place in the WBSS tournament was dependent on him beating one of the best junior welterweights in the world.

Taylor (13-0, 11 knockouts) was also living out of a hotel room which he shared with a stablemate and was making trips from his training base in London back up to Scotland at the weekends. This time he has secured an apartment, conveniently located near the gym, family have been coming to visit and his mentality has improved as a result.

“It’s easy to make excuses, but I don’t think Josh was in the right place, in his head, for the Postol fight,” said former featherweight champion Barry McGuigan, who has managed Taylor since his professional debut in 2015. “It took him a couple of rounds to get settled, but he’s much better, physically and mentally, for this one.

“I’m aware of the shape Josh has been in for prior fights and, at this stage of a camp, he’s the best I’ve ever seen him. And he needs to be because this is a real test, and every single one of these kids in this tournament can fight. But, honest to God, I truly believe that Josh is the best 140-pounder in the world – by far.”

Martin (22-0, 12 KOs) is coming off an eight-round unanimous decision over Breidis Prescott. The 25-year-old stylist from Tennessee, known as “Blue Chip”, is highly-touted, but Taylor insists that his quarter-final opponent is in for a rude awakening when the first bell rings at the SSE Hydro in Glasgow.

“He hasn’t been in with anyone who has my style, and no one can help him prepare for me,” said Taylor. “Fighters don’t realize how quick I am when I’m in the ring. It looks quick from the outside, but when I’m in the ring with you, it’s that much quicker because I don’t show you what’s coming. It’s my feet, my reflexes, my ability to switch and I punch hard.

The confident Scotsman will have the benefit of home court advantage against Martin but, should he progress further, it’s pretty much guaranteed that he’ll be globetrotting for future engagements.

“It’s an opportunity to see places that you would never think of visiting,” said Taylor. “If I was going to go away for a couple of weeks, I would never say to my girlfriend, ‘Let’s go to Jeddah in Saudi Arabia.’ I would be looking at New York, Mexico or Thailand or something. The tournament gives you a chance to go to places where world championship boxing has never been before. All of that raises my profile and I can’t wait.”

Kiryl Relikh has already progressed to the junior welterweight semifinals courtesy of a 12-round unanimous decision win over Eduard Troyanovsky. He will face the winner of Regis Prograis vs. Terry Flanagan. The Taylor-Martin winner will face whoever emerges from the other quarter-final being contested between Anthony Yigit and Ivan Baranchyk. Both of those bouts take place on Oct. 27 in New Orleans.

Tickets for Taylor vs. Martin are available from the World Boxing Super Series website and the SSE Hydro website.