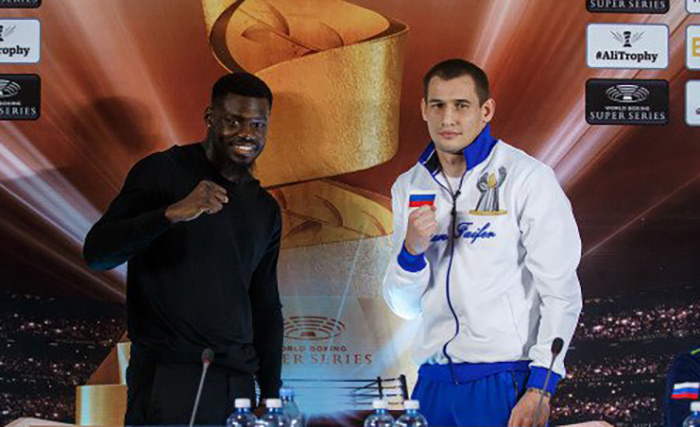 Andrew Tabiti outpointed Ruslan Fayfer over 12 difficult-to-score rounds (that were even more difficult to watch) in the first quarterfinal bout of the World Boxing Super Series’ second-season cruiserweight tournament on Saturday in Ekaterinburg, Russia.

Tabiti (17-0, 13 knockouts), a 29-year-old Las Vegas resident fighting under the Mayweather Promotions banner, won by scores of 116-111, 115-112 and 114-113 to advance to the semifinals of the WBSS where he will face the winner of the October 20 quarterfinal match between season one participant Yunier Dorticos and Mateusz Masternak.

Hopefully, that matchup will be better than his fight with Fayfer (23-1, 16 KOs), which was a prime example of how sometimes styles DON’T make fights.

Tabiti, The Ring’s No. 8-rated cruiserweight, flashed a quick jab and landed the cleaner shots but only let his faster hands go in spots. Fayfer, a 27-year-old Russian standout unrated by The Ring, was the more aggressive of the two unbeaten cruiserweights but he was often clumsy in his approach and lunged in head first with blatant battering-ram intentions. It took until the final round, but referee Roberto Ramirez Jr. finally penalized a point from Fayfer for his roughhouse tactics, which included excessive holding.

But it takes two to tango (or slow dance, in this instance), and Tabiti was also guilty of grabbing and grappling whenever the two were in close.

However, the American was more effective with his careful jab-and-counter-punch game than the Russian was with his lunge-and-maul “technique,” and was pleased with his performance, the result and his WBSS experience thus far.

“I love Russia, I love coming out here and fighting,” Tabiti told British TV commentator Barry Jones after the fight. “The guy was real awkward but he came and brought he fight. He seen I had good speed on him, so he wanted to make it awkward and dirty.

“My game plan was to relax at the beginning of the fight and then later on try to pick it up, but he got more awkward near the end of the fight, did a lot more holding so it was rough for me to get off.”

As for his next bout in the tournament, Tabiti predicts that Dorticos will be his opponent, at least that’s who he prefers to fight.

“Dorticos is the more credible name, so he’s who I’d like to fight next,” he said.