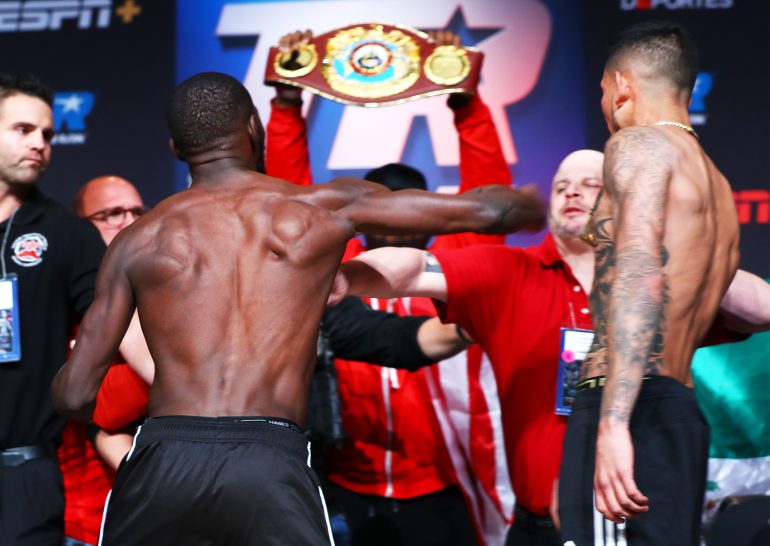 OMAHA, Nebraska — With the full extension of his rangy arms, Jose Benavidez Jr. sent Terence Crawford stumbling backward. The champion was in control of his balance — if not his emotions — for his response.

Crawford charged with a wild haymaker that just barely missed its mark, the right hand whizzing past Benavidez’s nose as he reactively cranked his head backward. Before any more blows could be thrown on the stage, Top Rank vice president Carl Moretti shielded Crawford with his arms spread wide, his shimmying rear-end pushing the aggressor backward.

Tensions were rising between the camps for each fighter, and they finally simmered over after they each made weight Friday. Benavidez stared at Crawford and performed a throat slash gesture before he was announced at 145 pounds. Crawford flashed a steely glare right back at Benavidez, then tipped the scales at 145.4 pounds.

The next time punches are thrown, they’ll be in the ring Saturday for their ESPN-televised welterweight title fight at CHI Health Center. 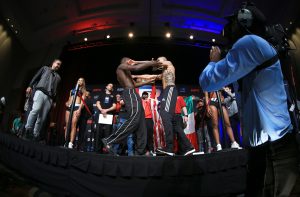 Benavidez (27-0, 18 knockouts) will need to shock prognosticators — and Crawford’s hometown fans — to do just that against The Ring’s No. 2 pound-for-pound fighter. The 26-year-old from Phoenix set up camp in Omaha nearly three weeks ago, and during that time, Benavidez claims he’s won over some of the 147-pound titleholder’s supporters.

At Wednesday’s public workout at the B & B Boxing Academy Crawford co-operates with trainer/manager Brian “Bo-Mac” McIntyre, Benavidez shouted insults from the ring. Crawford, 31, attempted to jump in there before security intervened.

Authorities were needed to calm matters down Friday, too. Omaha Police, wearing bullet-proof vests, scaled the stage swiftly after the swing that glanced past Benavidez.

Top Rank staff — including president Todd duBoef and COO Brad Jacobs — ensured security was more comprehensive than usual given the vitriol that exists between both camps. They even made sure the fighters and their teams stayed at separate hotels. Crawford at Hilton Omaha, the main hub for media traveling to the bout; Benavidez, along with his father/trainer Jose Sr., brother David (youngest 168-pound titleholder ever) and others at Hilton Garden Inn just a few blocks away. 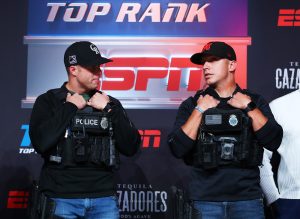 “I liked it,” McIntrye told The Ring. “Intense. He probably would have dropped him (if it connected).”

Luckily it didn’t, though as we found out last weekend in Las Vegas, the fight doesn’t always settle the score.

After Khabib Nurmagomedov tapped out Conor McGregor at UFC 229, the Russian vaulted himself over the cage and onto the floor, where a melee broke out with members of the Irishman’s team.

A bout that was once met with indifference has now generated plenty of hype, though there’s no antics being orchestrated here. These guys simply don’t like each other, dating back to their verbal exchange in February at a fight in Corpus Christi, Texas.

Crawford invited Benavidez to “step outside” then. Soon, they’ll step inside the ring as Benavidez looks to back up his bold words.

“Once he feels them punches going upside his head, I don’t even know if he’s going to want to stand there next to me,” Crawford (33-0, 24 KOs) said at Thursday’s news conference, where the fighters, of course, verbally jousted.

“He said we’re all bark but no bite. Come Saturday, he’s gonna find out how hard I bite. I ain’t even gotta do too much talking because I know what’s gonna happen come Saturday.”

Crawford and Benavidez insisted they won’t shake hands no matter what transpires Saturday. Khabib made the same promise before his own fight last week.