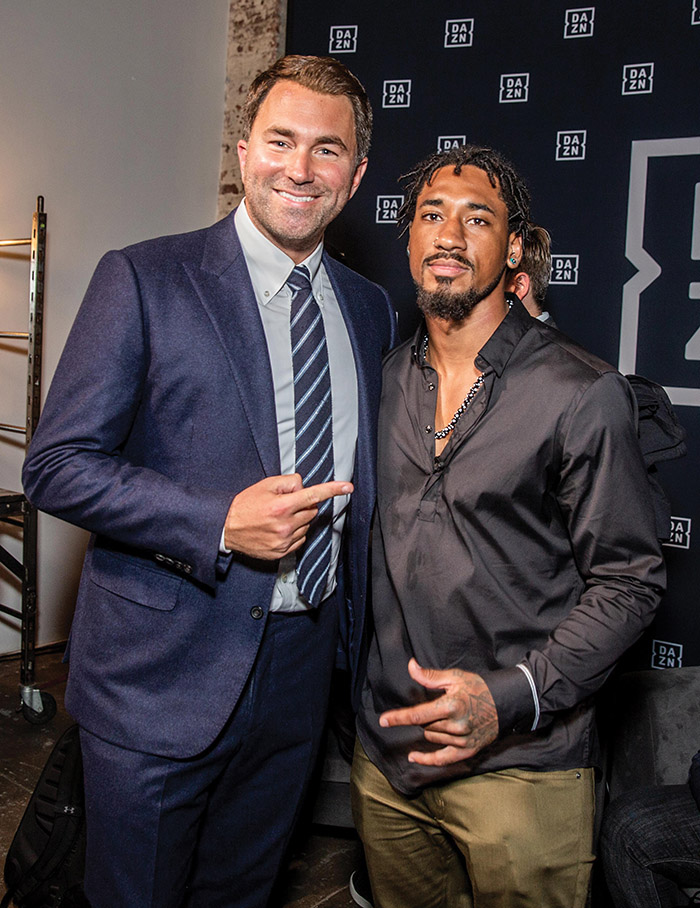 One of Hearn’s recent U.S. signings is unbeaten middleweight contender Demetrius Andrade, who is scheduled to challenge Billy Joe Saunders for the WBO title on October 20.
11
Oct
by Mike Coppinger

Vacant middleweight titles are now up for grabs in consecutive weeks.

Valcarcel said he will recommend a six-month suspension for Saunders when he meets with the WBO’s executive committee. The replacement bout between Andrade and Walter Kautondokwa, set for October 20 in Boston on DAZN, will now be contested for the WBO 160-pound title, according to Valcarcel.

One week later, on October 27, Daniel Jacobs and Sergey Derevyanchenko meet for the vacant IBF middleweight title on HBO. Jacobs and Andrade (25-0, 16 knockouts) trained together for their respective fights in San Carlos, California.

Kautondokwa (17-0 16 KOs) receives the title shot through his status as the organization’s next available contender. The 33-year-old Namibian has never competed outside Africa, and he’s unheralded in the U.S. as a result, but he’s oozing with confidence.

“This is a huge opportunity for me and one I will take with both hands,” said Kautondokwa. “I’ve been in the gym and I am 100 percent ready to get to Boston and add Demetrius to my KO record.

“He’s been preparing for Billy Joe, who is a technical guy that doesn’t have power. I am going to be a nightmare for him next Saturday night and I am ready to become a major player in the middleweight division.”

It if his proclamation comes true, it would be a major upset. Andrade, 30, is regarded as one of the most talented fighters in the sport, a skilled boxer who simply hasn’t had his opportunity under the spotlight.

The former junior middleweight titleholder is rangy and athletic, and he’s expected to cruise past Kautondokwa. If “Boo Boo” and Jacobs both win later this month, they could meet next year in a unification title matchup streamed on DAZN. After all, they’re both promoted by Eddie Hearn.