Jerwin Ancajas meets Srisaket Sor Rungvisai in Bangkok; could unification be next? 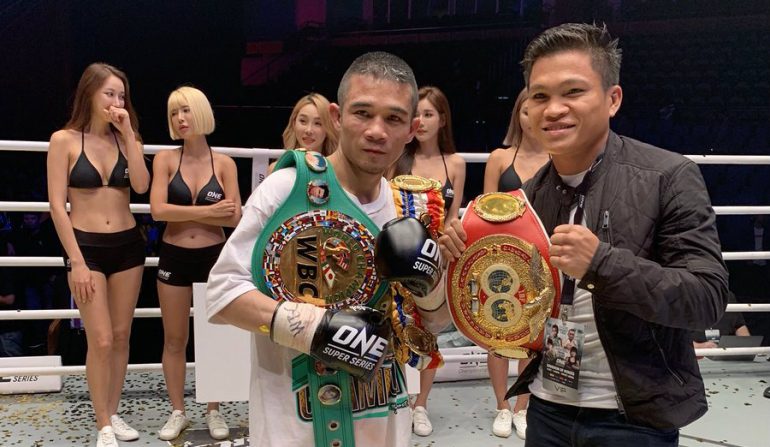 The confrontational style of calling out an opponent popular in the United States doesn’t play as well in Southeast Asia. So when Jerwin Ancajas traveled to Bangkok to watch Srisaket Sor Rungvisai turn back Iran Diaz’s challenge of his RING magazine junior flyweight title on Saturday, there was no trash talking or faux pull-apart tussling.

Instead, the two titleholders bowed to one another at center-ring and posed with their belts as Ancajas’ matchmaker Sean Gibbons snapped photos on his smartphone.

The American dealmaker, plus the Filipino boxer and his trainer Joven Jimenez, were there for more than a photo opportunity.

“We wanted to come watch him fight…and then put out a gauge of what kind of interest is out there. But stylistically this is what we’ve been looking for. We’ve had a couple bad runs but the difference in a fight between Rungvisai and Jerwin, somebody’s getting knocked out,” said Gibbons.

Those “bad runs” for Ancajas include a forgettable points win over mandatory challenger Jonas Sultan in May, followed by a disappointing draw with unheralded fringe contender Alejandro Santiago last month. The precarious showing hurt his reputation among top 115-pounders, but Gibbons thinks Sor Rungvisai’s flat-footed, brawling style would bring out the best in Ancajas.

“It would absolutely erase the last few performances that weren’t exactly how I saw them on paper. They didn’t play out like a script I wrote,” said Gibbons. The WBC granted Sor Rungvisai a second optional defense last week at their annual convention in Kiev, Ukraine before facing mandatory challenger Juan Francisco Estrada in a rematch of their entertaining contest in February of this year, which Sor Rungvisai won by majority decision.

Speaking immediately after the Santiago fight, Ancajas said he would be open to a rematch to settle the draw, but remains focused on the larger game, namely Sor Rungvisai (47-4-1, 41 knockouts) and Estrada.

Gibbons says he spoke with Bank Thainchai Pisitwuttinan, promoter of Sor Rungvisai, and will touch base again with him later this week to see if a deal can be worked out. Unification are exceedingly rare at the lighter weights, but the popularization of the weight class through the “SuperFly” series on HBO, plus Top Rank’s backing with ESPN, could make the fight viable.

“They have money, they have dates, they have venues to do it in the U.S. and we’d be in touch this week to see if we could put something together,” said Gibbons.

An email to Pisitwuttinan, who handles Sor Rungvisai alongside Singapore-based MMA company One Championship, wasn’t immediately responded to.

Could there be a silver lining to Ancajas’ recent vulnerability? Gibbons would hope so.

“To me, the guy would think Jerwin is easy money. Go watch his last two fights. They’ve got to be licking their lips,” said Gibbons.