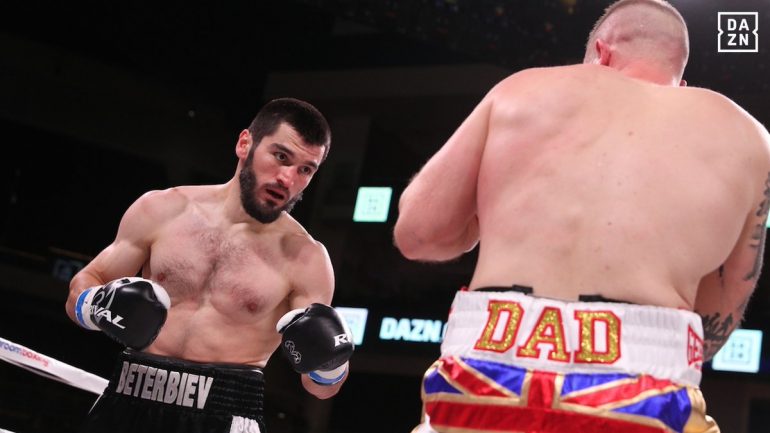 Eddie Hearn wondered if Artur Beterbiev was human in the lead-up to the Russian’s fight against Callum Johnson.

Turns out he is.

Beterbiev’s flaws were evident in his first bout under the Matchroom Boxing banner, though he remained undefeated and maintained his perfect knockout streak. The light heavyweight titleholder was clipped by a left hook in Round 2, but Beterbiev weathered the storm and finished his overmatched foe two rounds later Saturday in Chicago.

A right hand dropped Callum Johnson in Round 4, and the heavy underdog was in no shape to continue as referee halted the contest at 2:36 of the frame.

“He worked at close distance, it was his strategy,” said Beterbiev, The Ring’s No. 7 light heavyweight. “My coach told me you’re much better boxer, do boxing. I like to box. I did boxing.”

The 33-year-old Russian scored a knockdown in the opening frame with a a right cross, and it appeared Johnson would present little challenge. Beterbiev (13-0, 13 knockouts) was busting his face up with jabs and straight rights, and the Brit had no answers.

But then he connected on a right hand in an exchange, and Beterbiev wobbled before he finally planted his left glove on the cavanas as support. It was the first knockdown of his professional career, a moment that stunned both the champion and the crowd at Wintrust Arena.

Johnson (17-1, 12 KOs) didn’t seize his opportunity, though, and allowed Beterbiev to regain his bearings. And just like that, the 33-year-old’s chance was gone.

Beterbiev went back to work behind his jab in Round 3, and Johnson’s left eye began to close. As he absorbed clubbing shot after clubbing shot — 81 punches connected for Beterbiev to just 31 for the challenger — it was clear the end was near.

Finally, Beterbiev landed the telling blow in Round 4, possibly setting up a significant unification fight next year. The power-puncher now resides in Quebec, where fellow 175-pound titleholders Adonis Stevenson and Eleider Alvarez also reside. A matchup with either man would be a big attraction in Canada, but both fighters have tough assignments coming up.

Stevenson defends his lineal championship against Oleksandr Gvozdyk on December 1, and Alvarez meets Sergey Kovalev in a rematch in February. If Beterbiev fights any of those four boxers, he’ll have to make sure his defense — and inside game — is a lot sharper than it was against Johnson.