Canelo Alvarez will move up to super middleweight for Dec. 15 return vs. Rocky Fielding 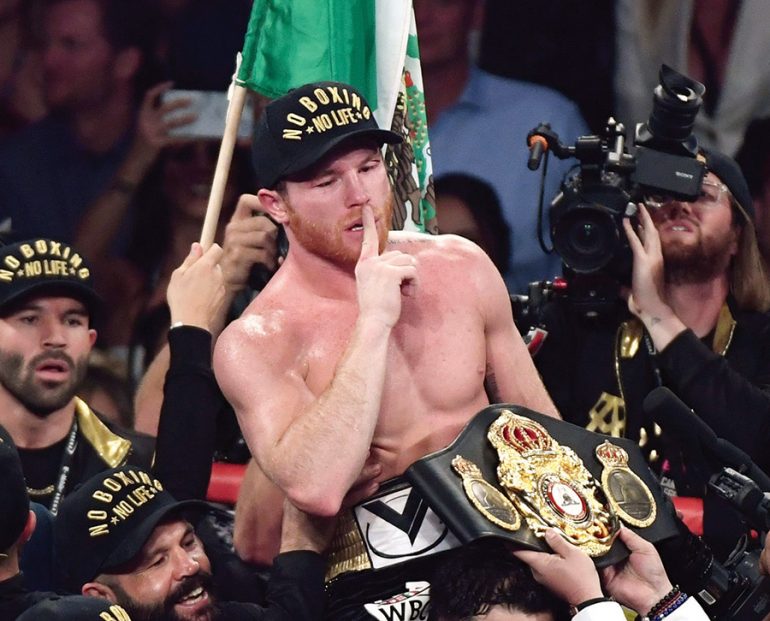 When Canelo Alvarez reaffirmed his desire to fight in December, even in the aftermath of his brutal win over Gennady Golovkin last month, his words were met with a grain of salt.

After all, Alvarez suffered a nasty gash over his left eye and had just netted 10s of millions of dollars. True to his word, Alvarez is indeed fighting before the end of the year. He announced Friday that he’ll move up to super middleweight for a bout with Rocky Fielding on December 15 at Madison Square Garden, a bout that will mark his East Coast debut.

It’s unclear if Alvarez, who is The Ring’s middleweight champion, plans to campaign at 168 pounds moving forward. It could simply be an opportunity for the 28-year-old to make weight comfortably in an interim fight against a massive underdog.

Eddie Hearn, who promotes Fielding, told The Ring “we will see” when asked if the fight would be televised on DAZN or HBO. Hearn acknowledged that he’s pursuing Alvarez to fight on DAZN, as is ESPN and Showtime. Alvarez (51-2, 34 knockouts) has been tied to HBO since 2015, but with the network leaving boxing, the star will need a new home.

However, it’s possible HBO will carry Alvarez-Fielding as its final offering. Canelo is the biggest boxing attraction in the world not named Anthony Joshua, and his victory over GGG generated approximately 1.1 million pay-per-view buys.

His career-best victory wasn’t without controversy, of course, but now Alvarez is moving on with a stay-busy fight against a soft opponent he figures to destroy in the earlier rounds. Not that there’s anything wrong with that. For decades, star fighters have stayed active with bouts against limited opposition, and that’s exactly what Alvarez is doing after his May bout with GGG was cancelled due to a positive PED result.

Fielding (27-1, 15 KOs) was knocked out in one round by Callum Smith (now The Ring’s super middleweight champion) in his lone bout against top-flight opposition. That was in 2015, and since the setback, the 31-year-old Brit has reeled off six consecutive wins, most notably a fifth-round stoppage over Tyrone Zeuge in his last outing.

Fielding is rated No. 9 by The Ring at 168 pounds, and he’ll be making his U.S. debut in the biggest fight of his life.

For Alvarez, this scheduled fight represents a longtime goal of his to fight in New York. He was slated to compete in the Big Apple in December 2016, but a hand injury suffered in a KO victory over Liam Smith halted his plans.

The biggest question that remains: what network (or platform) will televise the fight?