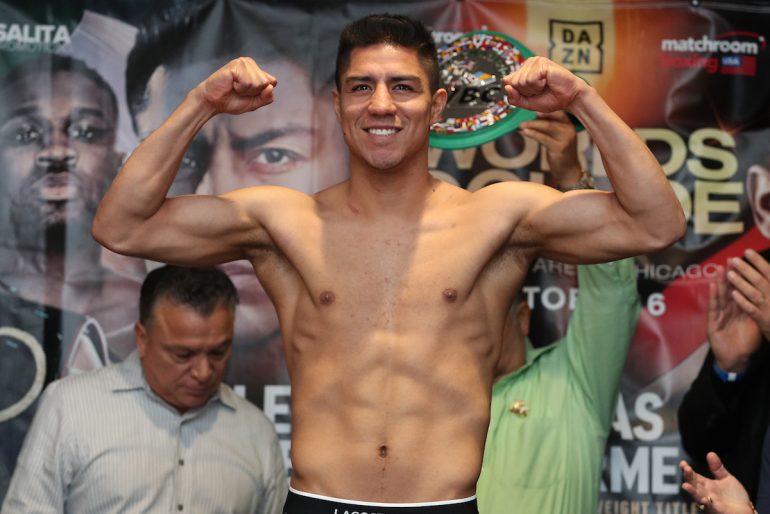 Jessie Vargas always craved an opportunity to show he can carry a promotion.

Finally, 10 years into his boxing career, he has his shot. Vargas is the A-side of the equation Saturday in Chicago as Eddie Hearn kicks off his first U.S.-based show on DAZN — billed Worlds Collide — the culmination of months of strategic planning at Matchroom Sport.

Vargas isn’t a star, the kind of fighter Hearn perhaps hoped to build his U.S. foray around, but the Las Vegas-based boxer is a bona fide welterweight contender, and a telegenic presence who is counted among the best interviews in the game.

At 29 years old, Vargas (28-2-1, 10 knockouts) believes he’s just now hitting his stride; that sweet spot where youth meets experience. Fresh off a thrilling draw with Adrien Broner in April, Vargas’ stock continues to rise. With a victory over Thomas Dulorme in the main event Saturday he’ll earn a title shot next year, although it could come against one of his best friends in the sport.

“It’s a step in the right direction (to headline as the main attraction),” Vargas told The Ring. ” … Every time you reach another pinnacle of success you want to find the next goal you must accomplish.

“I know winning this fight will give me the opportunity to fight the other champions and become the best in the division.”

That’s no easy task. The welterweight division is easily the most stacked in boxing. To establish himself as the best at 147 pounds, Vargas would have to run a gauntlet that includes titleholders Terence Crawford, Errol Spence Jr., Keith Thurman and his good pal, Shawn Porter.

Because if Vargas wins as expected, he’ll be one of the mandatory challengers for the WBC title held by Porter, a man he’s struck up a close friendship with while living in Vegas.

“It was the fight I would pursue as the last resort,” said Vargas, who two defeats came to future hall of famers Manny Pacquiao and Tim Bradley. “We both accepted in the past we would not fight each other unless there was a world title on the line but guess what? He’s the champion now. We understand how the business works. We always knew it was possible, we just always hoped it would be later on.”

“I have a lot of respect for him. But as soon as I get inside the ring, everything changes. The respect is all thrown out the ring. If you look back at history, the times when guys who are friends fought each other, they were the biggest wars.”

That fight looms for the first half of 2019 provided Vargas turns back Dulorme, a 28-year-old Puerto Rican power-puncher who once was regarded as one of the prospects. That was six years and three losses ago. At this juncture, Dulorme (24-3, 16 KOs) is simply a stepping stone for Vargas.

The affable native of Los Angeles is a regular at all the biggest fights, and he’s well-acquainted with the politics that divide the sport. He became a two-division titleholder under the Top Rank umbrella before he jettisoned Bob Arum and Co. for Al Haymon and PBC last year.

Now, in his 10th year in the sport, he believes he’s finally found “the right promoter backing me and putting me in the biggest fights possible.” This is his first bout with Hearn, and the British promoter is making good on his promise to spotlight Vargas.

Hearn boasted that he would sign all the brightest stars in the sport when he announced his venture with DAZN in May — a deal that calls for 16 boxing cards Stateside per year — but so far, the plan hasn’t come to fruition. There’s still plenty of time to accomplish his goal, and he’s not discounting the possibility Vargas ascends to that perch.

“We need guys who are going to get themselves in position for big fights,” Hearn told The Ring. “All of a sudden, Jessie Vargas is in line to fight Porter, and we’ll be extremely aggressive in the bidding for that fight.”

Porter-Vargas would certainly be a nice pickup for DAZN. After all, Porter is coming off a career-best victory over Danny Garcia last month, and Showtime is one of the most dependable action fighters in the game. But for the fight to truly gain interest, Vargas knows he needs to do more than simply cruise past Dulorme.

“I’m perfecting the level of technique that I have,” he said. “I’m a young veteran in the sport. I know exactly what I’m doing. I have the ring savvy that I need to become world champion and maintain myself there.

“I need to make a statement and let the fans know that I’m not only back, but back better than ever. They’re going to see a new and improved Jessie Vargas: strong, versatile, extremely fast and all the experience on his side. Now I’m at the position of my career when I’m in prime and I’m going to shine on Saturday and the world will know I’m here to stay.”