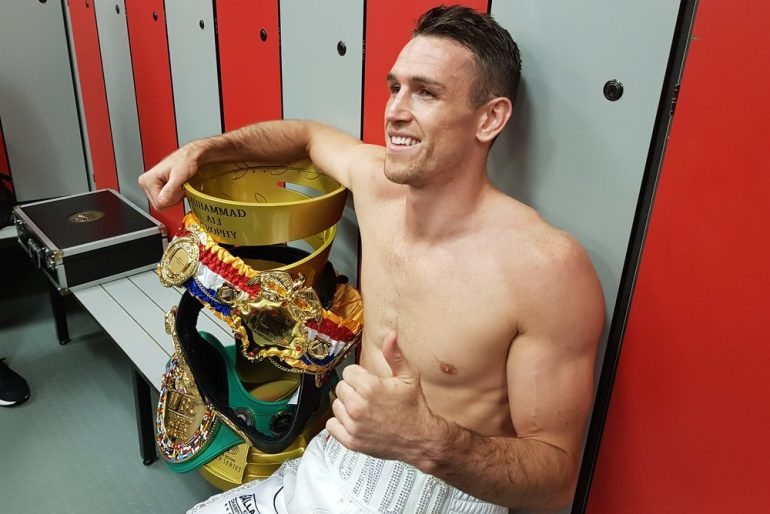 Like most people involved in the fight game, writers are frequently required to hustle.

Within seconds of Callum Smith’s emphatic seventh-round knockout of countryman George Groves in Jeddah, Saudi Arabia, I had to hand off The Ring Magazine belt to Prince Naseem Hamed. At the behest of the World Boxing Super Series, the former unified featherweight champion would present the most recognizable belt in boxing to the winner of the super middleweight tournament final.

Naz, who I was lucky enough to spend time with earlier in the day, was in terrific form. Over 16 years removed from his final professional prizefight, the Hall of Famer is revered in the middle east and he was in huge demand. Therefore, as quick as I was off the mark, my esteemed U.K. colleague Kugan Cassius had already snatched Naz for a post-fight video wrap-up for iFilm London.

Smith still didn’t have The Ring belt and the clock was ticking.

Finally Kugan finished his interview and I handed the prize over to Naz. In habitual style, the charismatic Englishman swaggered off with the belt like it was his, taking his sweet time en route to the ring steps. Within seconds, Smith’s trainer; Joe Gallagher, his promoter; Eddie Hearn, and his older brother; Paul, were all yelling in my direction, “Where’s the belt?”. All I could shout back was, “Naz has it. He’s coming up!”

It seemed to take forever, but Smith was eventually handed the treasure and he couldn’t get it around his waist quick enough. Along with it was the WBA title Groves had been defending and the inaugural 168-pound Muhammad Ali trophy.

On the other side of the ring, I noticed Smith’s stablemate Anthony Crolla. The former WBA lightweight champion, who lost a brace of Ring title fights to the superb Jorge Linares in 2016 and 2017, was absolutely beaming. I asked Crolla if I could get back to the dressing room for some interview time and the reaction from the affable Manchester man was positive.

The only other member of the media who got in was Kugan, who beat me to the punch yet again. But patience is a virtue.

“When that belt got put around my waist, I said to (older brother and former junior middleweight titleholder) Liam, ‘I can’t believe I’ve got the Ring Magazine title,’” said Smith (25-0, 18 knockouts). “That’s the belt top fighters had when I was growing up as a kid. You dream of becoming a world champion, but you never think you’re gonna get one of them.

“As a kid, I’d read Ring Magazine, Boxing News and Boxing Monthly. I’d race home from school with Liam to see who could get to them first. I grew up around boxing; my dad was a huge fan, and I’m the youngest of four brothers (who box/ boxed professionally). It’s a big part of my life. Sitting with these belts now has been a dream of mine since I was a kid. I always believed in myself but believing it and doing it are two different things. I can’t believe I’ve actually done it. I’m over the moon.”

After fulfilling his drug testing requirements, Smith was embraced by his brothers: Paul, Stephen and Liam, his father; Paul Sr., and his fiancé who is pregnant with their first child. The room was mobbed with friends and well-wishers and the fighter, wearing a perpetual grin of satisfaction, sat down and absorbed the most special moment of his professional life. 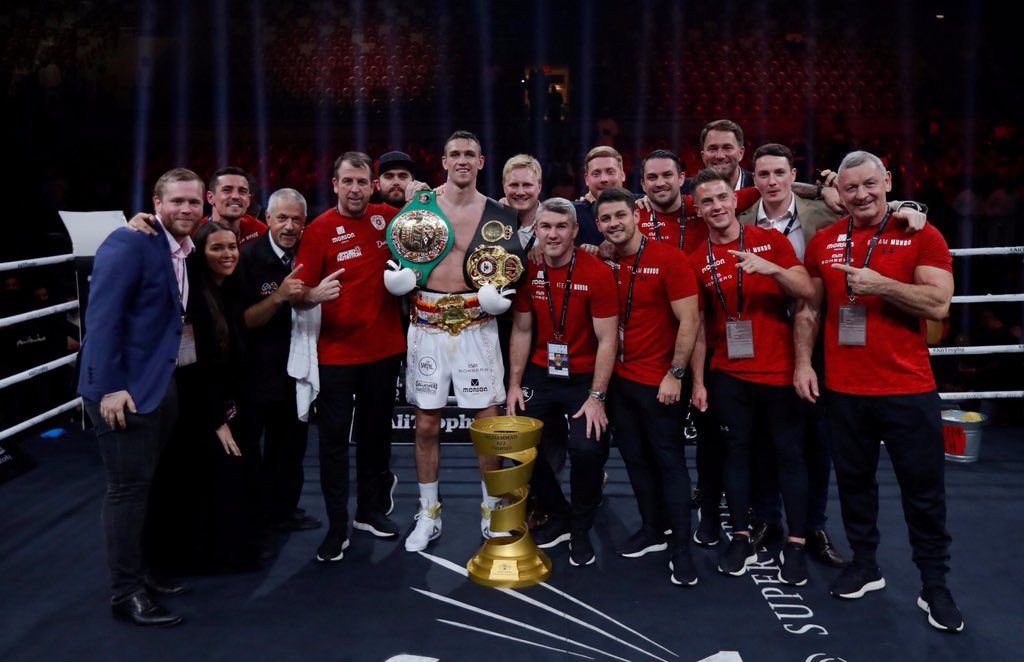 One other person with a grin to match was Gallagher.

“With this tournament, it’s all about the long game,” said The Ring Magazine Trainer of the Year for 2015. “You don’t worry about peaking for the quarter-finals or the semi-finals, it’s about getting the job done in the final. I’m just pleased that Callum got to fight the No. 1 ranked super middleweight in the world by Ring Magazine. Callum hasn’t just won a world title from the third or the fourth best, he’s beat the man. Callum Smith is now the No. 1 fighter in the division.

“In Britain, there are no other Ring Magazine champions at the moment. It’s an exclusive club with the likes of Lennox Lewis, Ricky Hatton, Joe Calzaghe, Terry Downes. Look at the only two fighters who have held The Ring belt at super middleweight: Joe Calzaghe and Andre Ward. At heavyweight, Anthony Joshua doesn’t have The Ring belt yet. Callum Smith just catapulted himself into a different club tonight. He’s got all the marbles now, and Eddie Hearn has his first Ring Magazine champion.”

Hearn, boss of Matchroom Boxing, has had worse weeks. On Sept. 22, colossal heavyweight superstar Joshua blasted his way through Alexander Povetkin for a seventh-round stoppage in yet another Wembley world title extravaganza. Now, just six days later, Hearn’s top super middleweight charge was the toast of British boxing and the No. 1 fighter in his division.

“We’ve got (Aleksandr) Usyk as well,” offered Hearn, referencing the undisputed cruiserweight champion, with a twinkle in his eye.

“Did you have Usyk when he won it?”

“I just said to ‘Swifty’ (Stephen Smith), ‘With The Ring Magazine belt, Callum is now the main target.’ He’s the No. 1 in the division, he’s the man to beat. All these other guys like (WBO titleholder Gilberto) Ramirez and (WBC titleholder David) Benavidez need to beat Callum Smith to become top dog.

“That was a brilliant performance. Sometimes when you wait this long for a big chance, it passes you by. You haven’t got the momentum to take it. When Callum was stopping (Hadillah) Mohoumadi and (Rocky) Fielding in one round, it felt like he was in his prime. But what he’s done, he’s grown into a man, and he was so strong tonight.”

Groves can attest to that. The deposed champion was understandably devastated following the fourth professional defeat of his career and your heart went out to him. The Londoner is a real fighting man who will probably come back swinging as he has done in the past, but his paramount goal after the fight was to return home to his wife and child.

“I’ve always been of the opinion that there’s more to life than boxing,” said Smith. “It’s a sport, it’s a job, but family’s more important at the end of the day. I think I’ll appreciate that even more when my new son or daughter comes along in a few months’ times. I’d like to be hands-on with that for a while and then get back to boxing.

“I want unification fights because there are a few world titles that I still don’t own. And, if I stay around, I’m sure I’m big enough to move up (to light heavyweight) and try and become a two-weight world champion. There’s a lot I can still do. But I’ve always been looking ahead, whereas with this fight, I said to myself, ‘If I win, I’m going to sit back, enjoy it and be proud of what I achieved’.”

There’s not one single person who can deny Callum “Mundo” Smith some time to himself. He’s earned it.