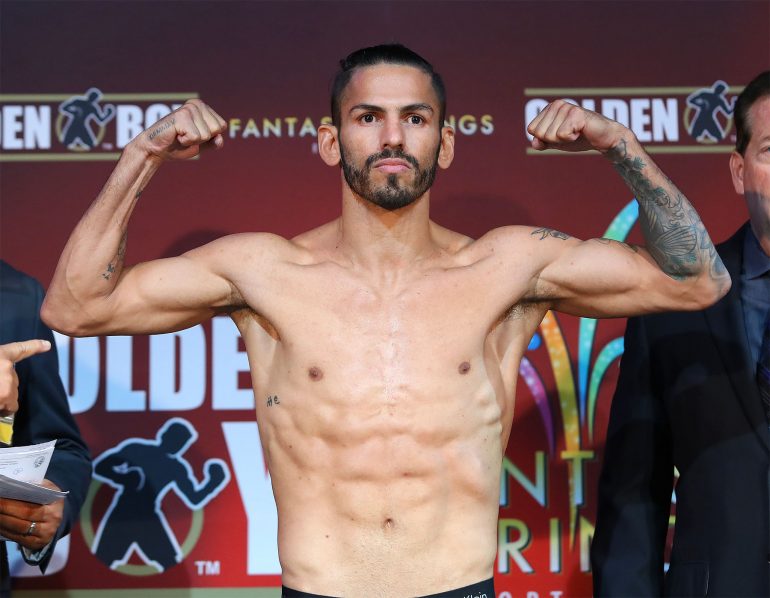 INDIO, California – In his junior welterweight debut, Jorge Linares knocked out Abner Cotto in the third round for win, and to set a precedent to the next challenge that comes his way.

Scheduled for 12 rounds, and fought at contracted weight of 138-pounds, the contest was the main event of a “Golden Boy Fight Night” card held at the Fantasy Springs Casino & Resort, and streamed live on Facebook Watch.

If it wasn’t already the preconception, Linares (45-4, 28 knockouts) proved he had the hand speed advantage over the Puerto Rican in the opening round, and that aspect alone got him early success in the second when a rapid right hand off the jab dropped Cotto to the canvas for the first time. Cotto, 31, fell in a sort of delayed reaction, and Linares walked off and stared as if the single shot was going to be enough.

Cotto (23-4, 12 KOs) eventually did get up and survive the small amount of time left in the round, but Linares didn’t take long to back to what worked in the fateful third. Another quick right hand off the jab sent Cotto falling backward to the floor for the second time in the fight, and he was all out of sorts once getting up with plenty of time left in the round. As action resumed, Linares furthered his attack by going to the body and letting his hands go. One of those body shots strayed low, and Cotto complained to referee Raul Caiz Sr. – dropping his hands in that instant – and giving Linares a wide open opportunity to go for the final shot. A clean right hand landed on Cotto’s face and he proceeded to get bottled up in a corner before trying to clinch and sending Linares to the mat in the process. When trying to get up from that, Cotto’s rubbery legs failed him, and he fell into the same turnbuckle as ringside officials alerted Caiz that his corner had enough.

Linares, 33, starts a new mission to capture a fourth world title in as many divisions, or whatever other lucrative challenge can find him at 140-pounds.

“I’m sorry I didn’t get the knockout,” Duno said after the win. “It was an exciting fight, he was a tough opponent, and I hope to get it next time.”

In what was certainly the best fight of the night, there was no apology needed from the 22 year old from Cotabato City, Philippines.

Avilez (16-3-3, 6 KOs) was game to challenge the lightweight prospect who’s nearing contention, and starting in the first round, his lead left hook gave Duno something to worry about form the jump. Any early hope gathered from that success was quickly squashed by round’s end, however, as a Duno uppercut sent the Mexican to the canvas for the first time.

Going forward, Duno (18-1, 14 KOs) thwarted the lead left hook of Avilez by trading with him. His short, compact shots were getting the better of Avilez, who’s looping hooks were easy to see and catch with the gloves for defense. As the rounds progressed, the fight got plenty of cheers from the crowd as he two men went toe-to-toe, trying to one-up each other with plenty of power hooks and minimal jabs. In the sixth, Duno hurt Avilez badly with a right hand to the head and dropped him for the second time in the fight. Moments later in the sixth, a left hook dropped Avilez again in the waning seconds, prompting a wobbly walk to his corner before seven. In that round, Avilez proved himself to be tough – bringing back the lead left hook and forcing Duno to fight hard for the knockout he sought. Though it never came, Duno landed a right hand just before the final bell, giving Avilez another shaky walk to the corner and a final rouse from the crowd.

Travell “Black Magic” Mazion turned in a near perfect performance against Alan Zavala, hurting him early and often up until delivering a first round knockout for the win.

A tall junior middleweight prospect from Austin, Texas, Mazion (14-0, 12 KOs) started the fight off hot – landing a right hand to the head of Zavala in the opening seconds, and leaving no room for the Mexican to recover. Stunned early on in his United States debut, Zavala (15-3, 13 KOs) skirted the ring the best he could in order to get away from his attacker, but Mazion had more tricks up his sleeve. A perfect right uppercut stopped Zavala in his tracks midway through the round, and all he could do at that point was fire back and try to catch Mazion off-guard. Nearly all of his return fire missed, and Mazion kept at it with his uppercut, which Zavala never saw coming even on the second and third instance.

Mazion, 23, was in a hellbent zone as the end of the first round loomed, and he prevented the bell from sounding after landing a perfect left hook to the head that folded Zavala to the mat. Referee Edward Hernandez Sr. counted to ten as Mazion waited to celebrate an impressive performance over a man who had never been knocked out before.

“I feel amazing. I want to thank God,” said Mazion. “I want to send a blessing to Zavala. He’s an amazing opponent. I worked hard and came out with the victory. I went through a lot of bad things, but now I’m back thank God. Munguia, I respect you. But I got to get to the top somehow!”

Oscar Duarte earned himself a technical knockout victory to remain undefeated after Roger Gutierrez didn’t come out of his corner for the fifth round. The lightweight bout was scheduled to go eight.

After an opening round where he seemingly lost a close battle of feeling out jabs, Duarte started his success in the second round when an overhand right to the head startled Gutierrez. The Chihuahua, Mexico native immediately followed that up with two ripping hooks to the body, which forced the Venezuelan to fight on his heels for the remainder of the round. Gutierrez (19-4-1, 6 KOs) settled down once getting back to his jab, but many of the power shots he threw were either caught by the gloves of Duarte or wildly missed.

Duarte (15-0, 10 KOs) kept at it with a body attack the rest of the way, which not only kept him low and out of range of Gutierrez’s attack, but made the shots upstairs come out of nowhere. Frustrated in the fourth round, Gutierrez charged in with his head to cause a head clash and a break in action where referee Ray Corona docked a point for the foul. Duarte proceeded to end the round on a high note with his varied hooks, and Gutierrez sat in his corner wincing in pain from the accidental head clash he caused. Once Corona had a conversation with him and his corner, the fight was stopped.

“I had a great preparation with the Diaz Brothers and with four-time world champion Jorge Linares,” Duarte proclaimed afterward. “Gutierrez hit me with a headbutt and something turned on in me so I looked for the knockout. I’m not sure what happened, but we’ll still enjoy the victory!”

In the opening bout of the Golden Boy Promotions card, Elnur Abduraimov had a successful pro debut by forcing a first round stoppage of Aaron Hollis. The lightweight contest was scheduled for four rounds.

Abduraimov (1-0, 1 KO), an Uzbek amateur standout now fighting out of Brooklyn, New York, took a minute to gauge his distance against a fleet-footed opponent, but once letting his hands go, it didn’t take long for him to show his strength. Out of the southpaw stance, it was a right jab that caught Hollis on the chin and allowed Abduraimov to follow-up with a power left that threw him to the canvas for the fight’s only knockdown. A fellow southpaw, Hollis (4-8, 2 KOs) was visibly shaken once action resumed, and with his back against the ropes, started to get mauled by Abduraimov with a flurry just as referee Edward Hernandez Sr. stepped in to wave it off to prevent the inevitable.

“Hollis was good,” Abduraimov said after his first win. “Thank you to my coaches. I think it was a very good performance. I want to thank World of Boxing Promotions and Golden Boy Promotions. I’ll be back in October!”