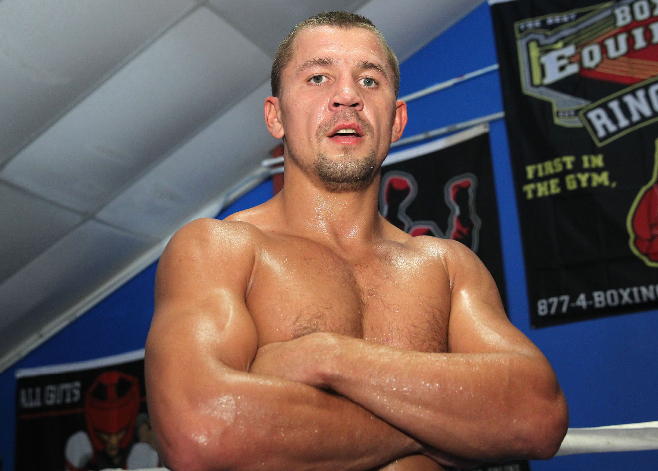 Matt Korobov, the definition of a hard-luck fighter.
29
Sep
by Michael Woods

He is 35, and while you can say age is just a number, it would be wrong to not acknowledge that even in today’s world, 35 isn’t young for a fighter.

Even with supplements and the most judicious of training regimens, a person’s athletic peak, physically speaking, is likely in the rear view mirror at 35. So one can understand and sympathize with how 28-1 super middleweight Matt Korobov is feeling on this day.

“My career in the last year is almost nonexistent,” he told The Ring. “I am super frustrated! I am not a big name. I am super dangerous. My background is stellar — 338-12 lifetime. My skills are superb. So I think people don’t want to fight me because until I am a bigger draw, it’s tough to get big fights. Chicken before egg type stuff. Even if I got some decent fights in undercards the the public can watch, that would help. We have reached out to all the big promoters with zero response. I could make some of those guys some serious money; I have a lot left in the tank. That’s also very frustrating. Bottom line is I’m a beast and I’m stuck in a cage! It’s real tough to get out; I’m not even sure how to get out. Just need couple of decent fights and I believe I should have a belt or belts.”

Korobov was on the ascent, then stumbled in getting stopped by Andy Lee in 2014. He’s fought four times since. Korobov beat Scott Sigmon in 2016 and last gloved up on March 24, 2018, vs. Jonathan Batista.

He spoke of the ups and downs in the past year …

“Training and my team and family (wife, son, plus his mom and dad live with him in Florida) have been the best part of the last year. The downs have been being so close to a good fight. David Benavidez I believe wanted the fight. I respect him for taking the fight (which was supposed to happen in July). He is young and made some mistakes, but that comes with being young and that’s why the fight didn’t happen. It was very disappointing. David had two promoters, the deal was signed and the fight was going to happen. He is young; he made a mistake. (Benavidez was signed to Sampson Lewkowicz but accepted a deal with Top Rank while contracted to Lewkowicz, and then Lewkowicz protested, and the Benavidez-Top Rank marriage was scuttled.) He will learn from it. Unfortunately if affected my career. I don’t blame a young person for making mistakes. I made plenty of mistakes and still make them. So just an unfortunate situation.”

How does he stay with chin up?

“My family and amazing trainers and Charles Mooney help to keep me focused.

“My main trainer, Mooney, is the guy who is like family to me. He has stuck by my side my entire career. He is basically working on standby, and by not having a fight he also hasn’t got paid. To sum it up, Charles Mooney is the man! No other trainer I know puts more heart into this game than Mooney. Matty Cerdone is another guy who is like a brother and has stuck by me through thick and thin.

“It’s very trying at times. But I have a family to support and my boxing is the only way I can do that. I am the breadwinner. Problem is, if I don’t fight I can’t win! So that drives me everyday.”