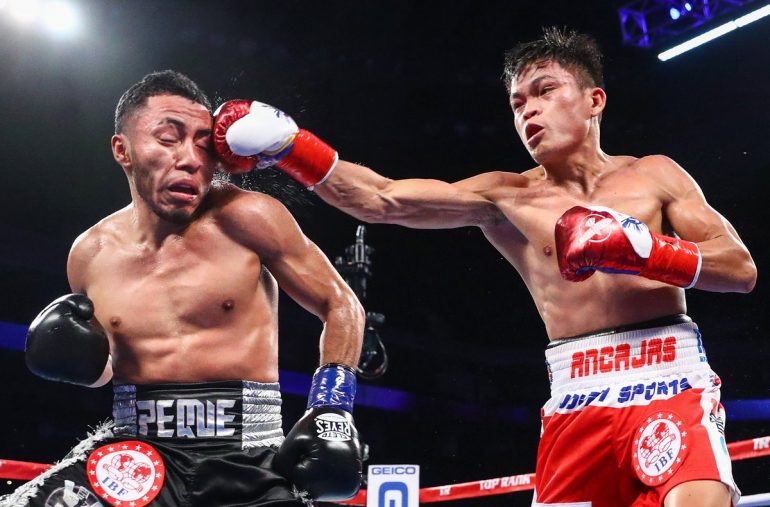 Ancajas lands a right during his 2018 fight against Alejandro Santiago, which would end in a draw.
28
Sep
by Joseph Santoliquito

Alejandro Santiago had to wonder what more could he do? The last two of the 22-year-old Mexican’s super flyweight fights have ended in a draw and three of his last seven.

This time, Santiago, battling IBF 115-pound titlist Jerwin Ancajas (30-1-2, 20 knockouts) at the Oracle Arena, in Oakland, California, thought he had it, only to hear the scorecards read: Judge Marshall Walker score overwhelming for him 118-111, while judges Michael Tate (116-112 Ancajas) and Chris Wilson (114-114) differed.

It doesn’t mean he liked it.

On the other hand, Ancajas, defending the title for the third time this year, thought he did enough to win. 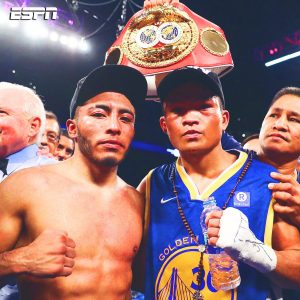 “It was a good, entertaining fight,” Ancajas said. “My timing was a little off. He was a little awkward. I felt like I pressed the fight and did enough to win.

“I still want all the champions at 115. Nothing has changed.”

In the twelfth, it seemed Ancajas, a southpaw who stood 5-foot-6 and appearing to tower over the shorter 5-foot-2½ Santiago, reached a comfort level and was convinced he had the fight won. Santiago, for his part, pressed the action and as the final neared, he was on the positive end of the exchanges.

Ancajas was brimming with confidence, off an 11th round where he landed a few left-handed body shots on Santiago. But Ancajas’ right eye was swelling and he did take a shot in the final minute of the 11th.

The body shots were a ploy Ancajas used throughout much of the fight, staying within himself and keeping a rhythm. Santiago, spurred by the partisan crowd chanting “Mexico, Mexico, Mexico,” used his superior hand speed and quickness against the Filipino. That was evident in the fourth and fifth rounds, when Ancajas tried loading up on power shots and missed horribly. 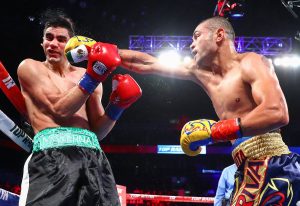 In the main event, Jose Uzcategui (28-2, 23 KOs) won a 10-round, unanimous super middleweight decision over Ezequiel Osvaldo Maderna (26-5, 16 KOs). The victory was Uzcategui’s second-straight, since beating Andre Dirrell in March to avenge his May 2017 controversial loss to Dirrell. The defeat snapped Maderna’s modest two-fight winning streak.

“I just played around and got some rounds,” Uzcategui said afterwards. “Now that I didn’t get the knockout, maybe the other champions will have the guts to fight me.”

On the undercard, former WBA super bantamweight champ Rico Ramos (30-5, 14 KOs) won for the sixth-straight time taking an eight-round super bantamweight decision over Daniel Olea (13-6-2, 5 KOs). Ramos, 31, and hasn’t lost since 2015, scored a knockdown in the first with a brutal uppercut.