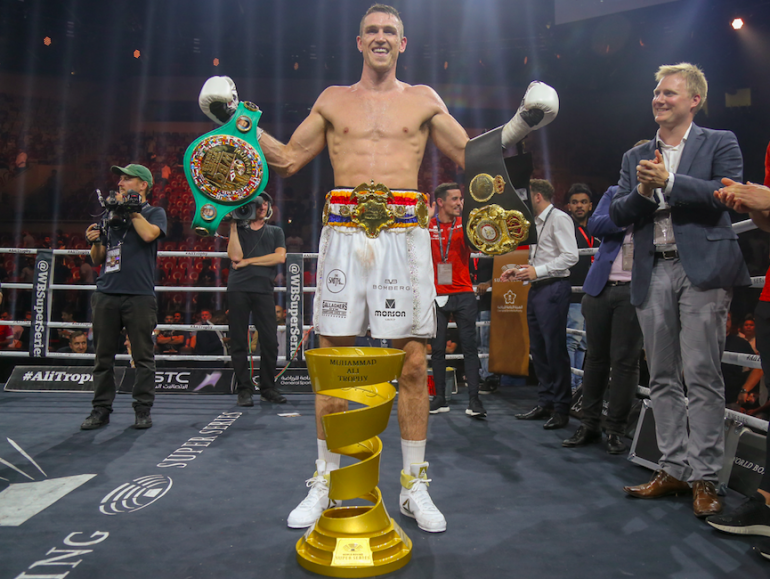 Callum Smith waited a long time for his shot at a world title, but he capitalized when his opportunity finally came.

The 28-year-old entered his World Boxing Super Series final with George Groves as The Ring’s No. 3 fighter at super middleweight. He left the squared circle Friday in Jeddah, Saudi Arabia, as The Ring champion at 168 pounds.

Smith was in control of the nip-and-tuck affair when a counter left hook sent Groves reeling into the ropes. Smith pounced and let loose with a series of punches, but it was a right hand to the body that was the beginning of the end. Groves hunched over, and then Smith landed a right uppercut followed by a grazing left hook that deposited him to a knee. Referee Luis Pabon reached the count of 10 at 2:04 of Round 7.

“It’s been a long time coming,” said Smith (25-0, 18 knockouts). “I’ve waited this long for this chance and if I didn’t take it another one might not come. I’m a big believer in my own ability and I’m now the best super middleweight on the planet.

“I always knew I had the power to finish him but I showed some boxing ability as well. It was a bit of a chess match but I got my big shots in and he couldn’t take them.” 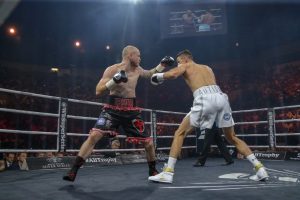 Smith’s breakthrough performance isn’t a shock, but before this outing, he was completely untested at the world-class level. Still, the talent was always apparent, and he made sure to display it against Groves, who held the WBA title and was The Ring’s No. 1 super middleweight.

Their contest for the vacant Ring championship was originally scheduled for June 2, but Groves (28-4, 20 KOs) suffered a dislocated shoulder in his semifinal victory over Chris Eubank Jr. Smith contended with an elbow injury before the fight was rescheduled.

Smith expected a title shot last year against Anthony Dirrell, but the WBC instead pitted David Benavidez against Ronald Gavril for its vacant belt.

When he finally stepped in the ring with the title on the line, Smith showed just the kind of seasoned fighter he is. He enjoyed a six-inch reach advantage coupled with three-and-a-half inches in height. The Liverpool native put it all to use.

He kept the 30-year-old Londer at bay by using his jab and fighting on the outside. Groves, who boxes out of a crouch, possesses an excellent jab and he doubled it up at times, but Smith countered over the top with an right in Round 3 that buckled him. Groves’ best weapon was effectively neutralized.

“He was the better man tonight, full credit to Callum,” Groves acknowledged. “He boxed well; heavy handed. I’m very embarrassed, I’ve never been hurt by a body shot in my life. He’s done a fantastic job. We knew he could punch.

“I didn’t go 50-50 with him trading (punches). I was landing a few shots myself but so was he and he got the decisive shot in the end.”

It’s Groves’ third defeat by knockout following two such results against Carl Froch, who could one day end up in the hall of fame. Groves bounced back from both disappointing finishes, but in his third title challenge, he was outpointed by Badou Jack in 2015. Two years later, Groves earned a fourth crack at a world title, and this time he came through with a sixth-round stoppage of Fedor Chudinov.

Now, it’s back to the drawing board again.

Smith, meanwhile, finds himself in the catbird position for richer fights and higher acclaim. The youngest of four, his three brothers are also notable names on the fight scene. Paul, the eldest, lost in all three of his title fights and retired after the latest setback. He, too, faced Groves but was stopped in two rounds.

Stephen Smith lost in both his title opportunities at 130 pounds. Liam Smith is a former titleholder and is currently rated No. 10 by The Ring at 154 pounds, but he was dominated in his two most-high profile bouts (losses to Canelo Alvarez and Jaime Munguia).

So it’s Callum who stands tallest — by a mile — among the Smith brothers.

“I’m not a man who shows a lot of emotion,” he said, “but I think you see tonight how much this means to me.”