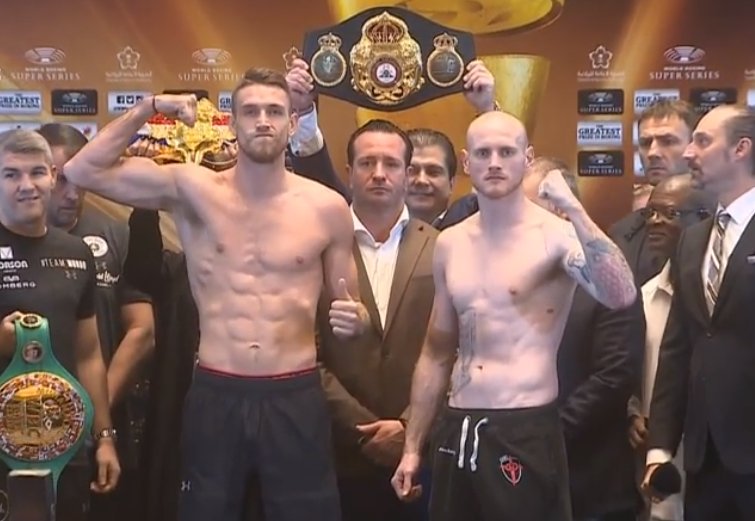 JEDDAH, Saudi Arabia – They had to give it a tagline and we’ve got – wait for it – “Rowdy in Saudi”.

George Groves and Callum Smith, champion and challenger respectively, weighed in at the Radisson Hotel in the Al Salamah District for their super middleweight world title bout which takes place at the King Abdullah Sports City on Friday.

At stake will be The Ring Magazine championship at 168 pounds, Groves’ WBA title and the coveted Muhammad Ali trophy for the winner of the World Boxing Super series final.

First on to the scales was the 6-foot-3-inch Smith who looked bright and energetic despite being cut to the bone at the weight. There was not a spare ounce of fat to be had ahead of what will be the Liverpool man’s first world title bout.

Groves, the defending champion followed, and he also looked to be in excellent fighting shape. This will be the hard-hitting Londoner’s third defense of the WBA title and it is likely to be his most challenging.

This bout will crown only the third Ring Magazine champion at 168 pounds, and the winner will certainly be in elite company. Joe Calzaghe won the inaugural Ring Magazine super middleweight title in March 2006; when he defeated Jeff Lacy, and Andre Ward followed when he outpointed Carl Froch in December 2011.